Bill to bifurcate Jammu and Kashmir gets Rajya Sabha nod

Amit Shah assured in Rajya Sabha that Jammu and Kashmir will return to being a state when the situation returns to normal there. 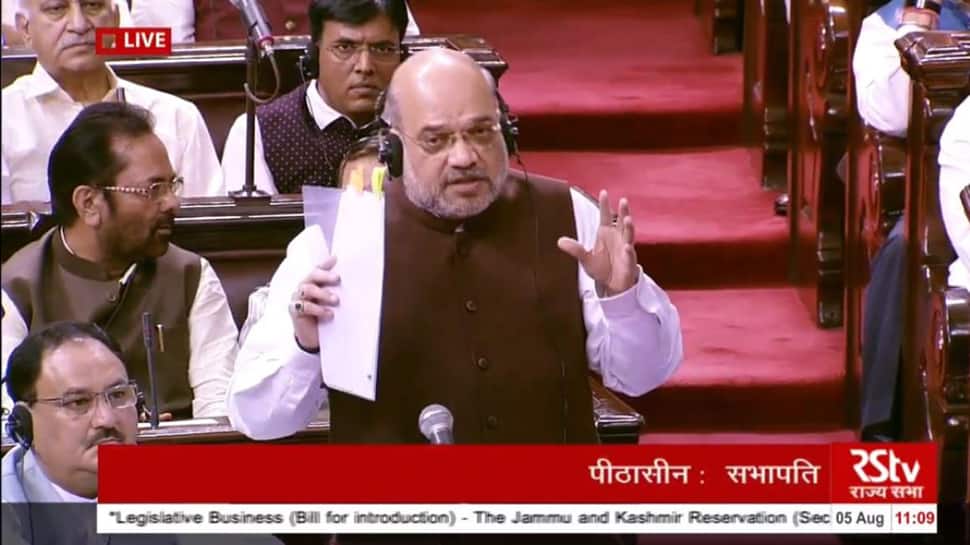 The Home Minister was welcomed with applause by Bharatiya Janata Party (BJP) MPs as he entered the Rajya Sabha on Monday morning. Earlier, Shah and National Security Advisor Ajit Doval met Prime Minister Narendra Modi before the Union Cabinet meeting, which discussed the prevailing situation in Jammu and Kashmir. This comes even as the state administration has imposed Section 144 in Srinagar as well as Jammu while mobile internet services have also been suspended. Former chief ministers Omar Abdullah and Mehbooba Mufti have alleged that they have been under house arrest. The two leaders have, however, urged people to maintain calm and not resort to violence. They have also targeted Prime Minister Narendra Modi-led NDA government at the Centre, accusing it of muzzling the voice of people of Kashmir.

Here are the the highlights from an eventful day in Parliament:

Mehbooba Mufti has been detained and taken to Hari Niwas Palace Guest House.

There were 125 votes in favour of the bill and 61 against it.

Voting was done through slips due to a technical glitch.

Amit Shah reassures those who doubt the move to scrap Article 370.

* Vaiko ji said Kashmir will become Kosovo. Let me assure you that Kashmir was, is and always will be heaven.

* Give us five years, we will make J&K the country's most developed place.

* I am not here to do politics. All of us have to work together to restore normalcy in Jammu and Kashmir. Let us rise above vote-bank politics.

Amit Shah focuses on the menace of terrorism.

* More than 41,000 innocent lives have been lost Jammu and Kashmir. Who is responsible? Pakistan's Zia-ul-Haq said that till Article 370 is in place, the youth of Kashmir won't be able to connect with India.

* Gujarat also has a border with Pakistan, so does Rajasthan. Why are the youngsters there not being misled? Because there is no Article 370 there.

* What message does the Parliament want to send to the people of the Valley? Should the people there remain in the 18th century? Those backing Article 370, ask them where their children are studying and working. Not in Jammu and Kashmir. Don't the common people of the state deserve a good education and good jobs in the state itself?

* If a J&K girl marries a man from Odisha, will she and her child get any rights in J&K? You're (Ghulam Nabi Azad) happy that inter-state marriages are taking place, even though there is no law, but set them free. J&K will mix with India in the true sense.

* How does Article 370 protect your culture, heritage and tradition? Are individual cultures and traditions not protected in states where Article 370 does not exist? Article 370 only serves to protect the selfish motives of a few politicians in J&K, does nothing for culture and heritage.

* The dream of Article 370 has been shown by politicians of Jammu and Kashmir to the people there. Can they count the number of benefits of Article 370? This was done for selfish reasons of a handful of politicians.

* Small-scale industries too can make an entry for the benefit of people in the state with the removal of Article 370.

* Those who defend Article 370 should tell me which doctor would go to J&K to help the people there? He cannot vote, cannot buy land, why would he go? Big doctors from around the world and in the country would never go to J&K if Article 370 was in place. And who suffers then? The people of the state suffer.

* Why would private institutions open in J&K? Which renowned professor would want to settle in J&K?

* It is a mental barrier, it is vote-bank politics which makes some defend Article 370. Nothing bad will happen with its removal.

* No one ever thought what Jammu and Kashmir and Ladakh would gain from Article 370.

* Nothing was gained by the people by Article 370. Instead, there was a lot lost. There was no development, education suffered with children forced to go elsewhere in the country.

* Article 370 has ensured a majority of people in J&K remain poor. Corruption has been at its peak here due to Article 370. The Indian government has sent crores of rupees to the state but most of it has gone down corrupt ways. Anti-corruption laws have applied because of Article 370.

* Article 370 prevented true democracy to exist in the state.

* Big companies want to invest in J&K, there will be plenty of jobs for the people. But Article 370 has prevented these big companies from going there.

Amit Shah assures discussion on the bill in Parliament on Tuesday.

Jammu and Kashmir Reorganisation Bill, 2019 to be introduced in Parliament on Tuesday.

Foriegn envoys have been briefed by MEA following notification for removal of Article 370.

Sources say NSA Doval monitoring situation in Jammu and Kashmir continuously. There have been no issues related to law and order so far.

Chandrababu Naidu tweets his party - TDP - supports the decision of the government.

Telugu Desam Party supports the Union Govt as it seeks to repeal Article 370. I pray for the peace and prosperity of the people of J&K.#Article370

Constitution of India had been rewritten without following any legal provisions: Punjab CM Captain Amarinder Singh

Ministry of Home Affairs issues advisory to all states and Union Territories to ensure peace.

The Rashtriya Swayamsevak Sangh (RSS) congratulated the government, terming Article 370 revocation as a “brave step”. Tweeting in Hindi, the RSS said, “We welcome the brave decision by government. This was extreme essential for Jammu and Kashmir as well as the whole of India. Everyone should rise above political differences and welcome this decision.”

Indian Army and Indian Air Force have been put on high alert after revoking of Article 370 and other decisions announced by government.

Close to 8,000 paramilitary troops airlifted and moved in from Uttar Pradesh, Odisha, Assam and other parts of the country to the Kashmir valley. Troops induction still going on.

Reacting to the scrapping of Article 370, Shiv Sena supremo Uddhav Thackeray said that the wish of former prime minister Atal Bihari Vajpayee and Bal Thackeray has been fulfilled. Congratulating Prime Minister Narendra Modi and Home Minister Amit Shah, Thackeray said that other parties must think about the country rather than worrying about political gains.

CRPF DG Rajiv Bhatnagar going to Jammu and Kashmir to review law and order situation in the Valley.

Article 370 is now history, click here to read what it said.

Congress is opposing the scrapping of Article 370 only for political reasons, says BJP MP Bhupender Yadav.

Justifying the decision, Home Minister Amit Shah says Article 370 never enabled Jammu and Kashmir to get connected with India in real terms. "If Ghulam Nabi Azad is saying that Article 370 was historic, its revocation is also historic".

Congress leader Ghulam Nabi Azad says "BJP has murdered Constitution". He, however, condemned the act by some MPs to tear a copy of Constitution.

Prime Minister Narendra Modi to address the nation on revocation of Article 370 on August 7, Wednesday.

The "statement of objects and resons" issued by Home Minister Shah read, "The Ladakh Division of the State of Jammu and Kashmir has a large area but is sparsely populated with a very difficult terrain. There has been a long pending, demand of people of Ladakh to give it the status of a Union Territory to enable them to realise their aspirations. The Union Territory of Ladakh will be without Legislature."

Ladakh separated from Jammu and Kashmir. Both Kashmir and Ladakh will be Union Territories. There will be no Assembly in Ladakh.

Mehbooba Mufti tweets, “Today marks the darkest day in Indian democracy. Decision of J&K leadership to reject 2 nation theory in 1947 & align with India has backfired. Unilateral decision of GOI to scrap Article 370 is illegal & unconstitutional which will make India an occupational force in J&K.”

“It will have catastrophic consequences for the subcontinent. GOIs intentions are clear. They want the territory of J&K by terrorising it’s people. India has failed Kashmir in keeping its promises.”

It will have catastrophic consequences for the subcontinent. GOIs intentions are clear. They want the territory of J&K by terrorising it’s people. India has failed Kashmir in keeping its promises.

Article 370 has been revoked through the Constitution (Application to Jammu and Kashmir) Order 2019.

All sections of Article 370 will not be applicable in Jammu and Kashmir, declares Home Minister Amit Shah.

Union Home Minister Amit Shah likely to make an important announcement in Parliament. He will speak in Rajya Sabha at 11 am and in Lok Sabha at 12 pm.

Union Home Minister Amit Shah to make a statement on Jammu and Kashmir situation in Parliament.

Leaders of all opposition parties meet ahead of Parliament session. The meeting on the issue of Jammu and Kashmir was convened by Congress leader Ghulam Nabi Azad.

Only Kashmir issue will be discussed in the Rajya Sabha today. All other business of the House have been deferred by the Chairman.

Section 144 imposed in Poonch in Jammu and Kashmir amid reports that all petrol pumps in the town have gone dry.

Congress moves adjournment motion on the Kashmir issue in both Houses of Parliament.

The Bharatiya Janata Party (BJP) issues whip to MPs to remain present in Lok Sabha and Rajya Sabha from August 5 to August 7.

Security forces in Jammu and Kashmir have also been provided satellite phones. Forty companies of CRPF have been deployed in Jammu while there are 100 companies in Srinagar. All vehicle entering Srinagar are being checked.

Senior officials of Jammu and Kashmir administration have been provided satellite phones for uninterrupted communication.

Security tightened in Srinagar in view of the imposition of section 144:

Jammu & Kashmir: Security tightened in Srinagar in view of the imposition of section 144 CrPC from midnight 5th August. pic.twitter.com/qErNGidUDi

The Shiv Sena has backed the Bharatiya Janata Party (BJP)-led central government over the prevailing situation in Jammu and Kashmir. In an editorial in its mouthpiece Saamana, the NDA constituent lauded Prime Minister Narendra Modi and Union Home Minister Amit Shah for tackling the situation in the state. READ FULL STORY

Senior Congress leader and former Union minister P Chidambaram has condemned the alleged house arrest of leaders in Jammu and Kashmir. Taking to Twitter, Chidambaram said, "The house arrest of J&K leaders is a signal that the government will defy all democratic norms and principles to achieve its objects. I condemn the house arrests...Before the day is over we will know if there will be a major crisis in J&K. Keeping my fingers crossed."

Jammu & Kashmir: Security tightened in Jammu in view of the imposition of section 144 from 6 am, today. pic.twitter.com/g5XndHNWK9