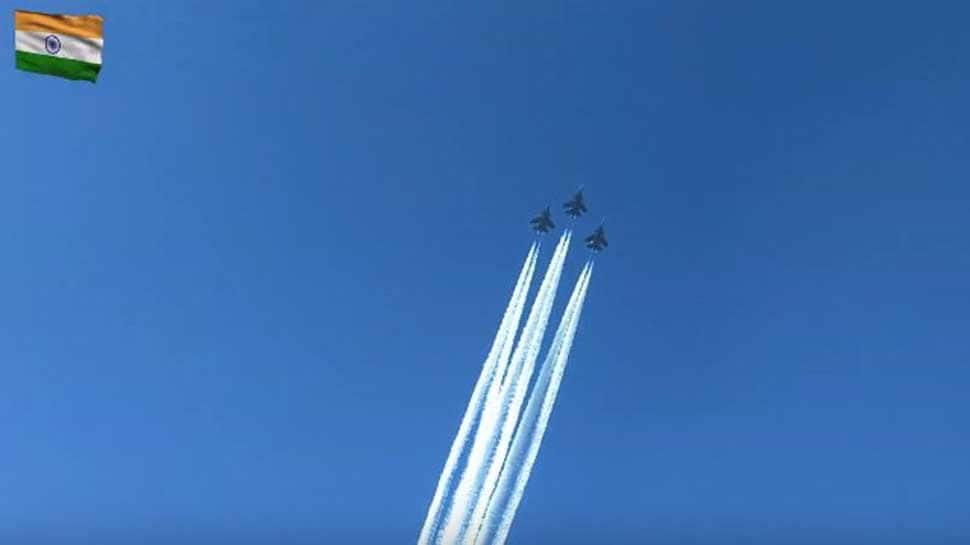 The country is celebrating its Republic Day today. The annual parade at Rajpath in Delhi, showing the country's military might and rich cultural heritage, has now ended.

SWAT women commandos, mobile hit teams, snipers are among the multi-layered security measure under which the national capital was placed for the Republic Day celebrations. Elaborate measures, also include deployment of anti-aircraft guns to secure the airspace.

Here are the live updates from the Republic Day celebrations underway in the national capital:

The Republic Day parade at Janpath comes to an end. The National anthem is being played at the Rajpath. President Kovind, chief guest South African President Cyril Ramaphosa, the first ladies and Prime Minister Narendra Modi leave the dais.

The final stage of 70th Republic Day celebrations - 33 aircraft of the Indian Air Force and three choppers of the Indian Army's aviation arm are part of the air show at the parade.

After the Rudras, the Hercules formation will follow - C 130J super Hercules in vic formations.

Daredevils of armed forces at Rajpath. 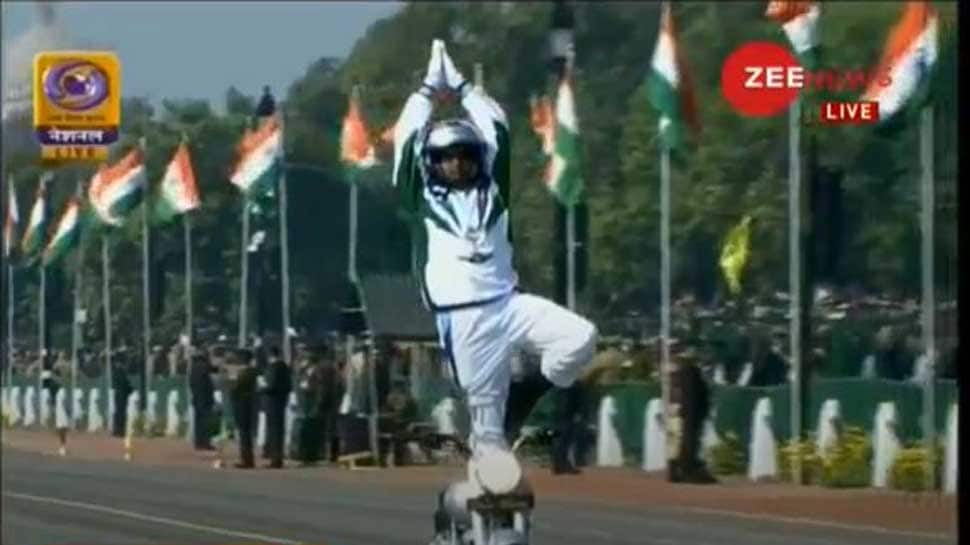 #republicdayindia 26 children including 6 girls and 20 boys have been honoured with Pradhan Mantri Rashtriya Bal Puruskar 2019 pic.twitter.com/8xxrTEM2OX

Uttarakhand, Uttar Pradesh, Delhi and West Bengal are the final states to present their tableaux.

Now comes a colourful tableau of Tamil Nadu. This is followed by Gujarat's tableau whose theme revolves around Dandi Yatra. Next is Jammu and Kashmir and Karnataka tableaus.

#republicdayindia Tableau of Karnataka is based on the 39th session of the Indian National Congress held in Belagavi in 1924, which was presided over by Mahatma Gandhi pic.twitter.com/tWsztHczoY

Now comes the tableaux of Tripura, Goa and Arunachal Pradesh. 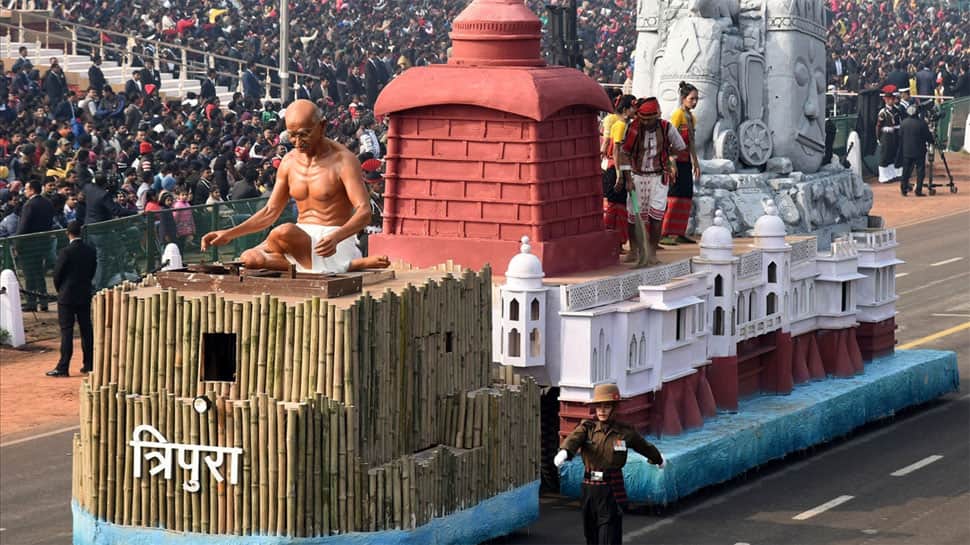 Punjab tableau's is based on the theme of Jallianwala Bagh massacre.

#republicdayindia : Tableau of Punjab is based on the theme of Jallianwala Bagh massacre pic.twitter.com/qGyOkInRGc

Next is Andaman and Nicobar's state tableau, followed by Assam, Tripura, Goa and Arunachal Pradesh jhankis. 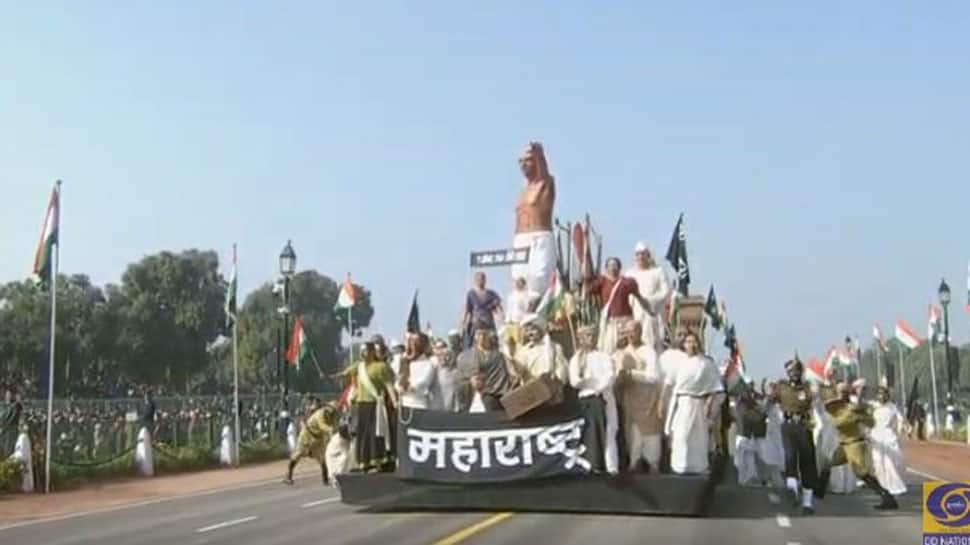 For the first time, all women marching contingent of the Assam Rifles take part. Major Khusboo Kanwar is leading the contingent.

"She believed she could, so she did!"

The Rajputana Rifles, Sikh Regiment and territorial army contingents marched past the dais. Veterans of Indian National Army (INA) who fought valiantly against the imperial forces take part in Republic Day Parade for the first time.

Marching contingents take the centre stage on Rajpath. They are accompanied by the Rudra Dhruv choppers in air.

War and battle tanks show India's military might. In this photo, visuals of the T-90 (Bhishma), the main battle tank of the Indian Army, commanded by Captain Navneet Eric of 45 Cavalry. 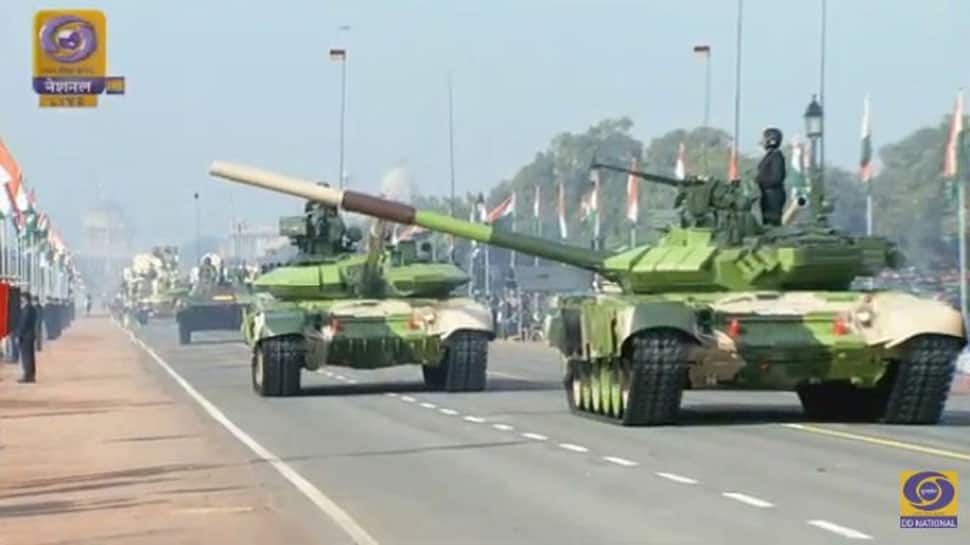 Indian National flag has been hoisted. The National Anthem is being played at Rajpath with the 21-gun salute.

The Republic Day function at India Gate began at 9 am. The Republic Day parade will start at 9.50 am from Vijay Chowk and proceed towards the Red Fort grounds through the Rajpath, India Gate, Tilak Marg, Bahadur Shah Zafar Marg and Netaji Subhash Marg.

Union Minister Rajyavardhan Rathore tweets, "As we celebrate #RepublicDay2019, let us renew our vow to our country: let us strive to live up to the ideals of justice, liberty & equality as enshrined in the constitution. Let us move towards a stronger, better India. Let us, with fierce pride, say in one voice: JAI HIND!"

As we celebrate #RepublicDay2019, let us renew our vow to our country: let us strive to live up to the ideals of justice, liberty & equality as enshrined in the constitution.

Let us move towards a stronger, better India.

Let us, with fierce pride, say in one voice: JAI HIND! pic.twitter.com/2VecSze02d

Visuals from Rajpath in Delhi:

Crowds gather for the #RepublicDay2019 parade at Rajpath in Delhi. President of South Africa Cyril Ramaphosa is the chief guest at the parade today. pic.twitter.com/dZCOKSXTiY

More than 3500 students created massive portraits of freedom fighters Bhagat Singh, Rajguru and Sukhdev on the eve of Republic Day in Pune.

Maharashtra: More than 3500 students gathered to create large portraits of freedom fighters Bhagat Singh, Rajguru and Sukhdev on the eve of Republic Day in Pune. pic.twitter.com/RCYPUpcfrj

The government announced the names of 112 persons, including a transgender, for Padma Vibhushan, Padma Bhushan and Padma Shri in the fields of art, social work, public affairs, science and engineering, trade and industry, medicine, literature and education, sports, civil service etc.

Delhi Metro services will be available at all stations during the Republic Day parade. However, boarding and de-boarding will not be allowed at Central Secretariat and Udyog Bhawan from 5 am till 12 pm, Lok Kalyan Marg (Race Course) and Patel Chowk from 8.45 am to 12 pm.

To facilitate smooth passage of the parade, no traffic will be allowed on Rajpath from Vijay Chowk to India Gate from 6 pm on January 25 till the parade is over, said Joint Commissioner of Police (Traffic), Alok Kumar.

Commuters are requested to plan their journey in advance accordingly and avoid the route of the parade from 2 am to 12.30 pm for their convenience, he said.
Movement of buses will be restricted at Park Street/Udyan Marg, Aram Bagh Road (Paharganj), Kamla Market, Delhi Secretariat (IG Stadium), Pragati Maidan (Bhairon Road), Hanuman Mandir (Yamuna Bazar), Mori Gate, Tiz Hazari, Kashmiri Gate ISBT and Sarai Kale Khan ISBT, police said.
Buses from Ghaziabad for Shivaji Stadium shall take NH-24, Ring Road and terminate at Bhairon Road. Buses coming from NH-24 shall take right turn on Road No 56 and terminate at ISBT Anand Vihar. Buses coming from Ghaziabad will be diverted at Mohan Nagar towards Bhopra Chungi for Wazirabad Bridge. All inter-state buses coming from Dhaula Kuan side shall terminate at Dhaula Kuan, the advisory stated.

No heavy vehicles will be allowed to enter Delhi from 10 pm on January 25 till the parade is over, and their entry from Sarai Kale Khan will be banned on January 26 from 7.30 am till 12.30 pm, the officer said.

Elaborate security arrangements are in place in Delhi for Saturday's Republic Day celebrations. Women commandos, mobile hit teams, deployment of anti-aircraft guns and sharpshooters have been deployed at strategic locations to keep a close watch on the eight-km-long Republic Day parade route from Rajpath to the Red Fort in central Delhi. Over 25,000 security personnel, from the Delhi Police and central security forces, were deployed across the city and the border areas.

Parakram vans, manned by NSG-trained commandos, have been patrolling strategic locations to ensure that security is not jeopardised. Thirty-six women commandos of Delhi Police's Special Weapons And Tactics (SWAT) unit, who were formally inducted in August last year, will be part of the security deployment. Snipers have been stationed atop high-rises while scores of CCTV cameras are keeping a tight vigil on people's movements on the parade route. Deputy Commissioner of Police (New Delhi) Madhur Verma said CCTV cameras and face-recognition cameras have been installed. Police are using counter-drone technology to thwart any attack or identify suspicious flying objects, a senior police officer said.