Amid widespread protests from the medical community, the Lok Sabha on Monday passed the Bill while Rajya Sabha passed it on Thursday. 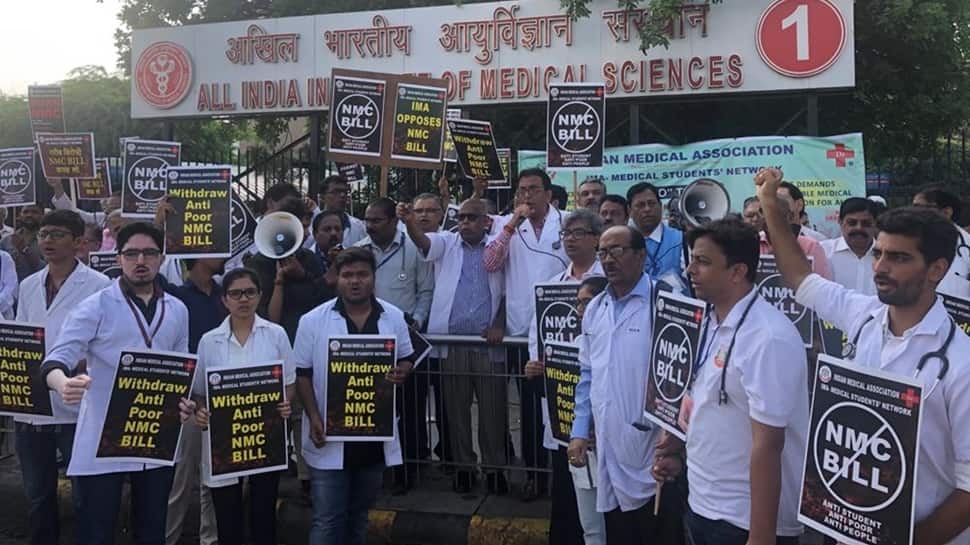 Intensifying its protests against the National Medical Commission (NMC) Bill for the second consecutive day, the Resident Doctors' Association (RDA) of Safdarjung Hospital in the national capital has called for an indefinite strike to be observed from Thursday. The All India Institute Of Medical Science (AIIMS) will also go on strike for a day. Amid widespread protests from the medical community, the Lok Sabha on Monday passed the Bill and by Rajya Sabha on Thursday.

The NMC Bill which was passed by the Lok Sabha on July 29 seeks to create the National Medical Commission (NMC) in place of Medical Council of India (MCI). The Bill also proposes a common final-year MBBS examination, known as National Exit Test (NEXT), for admission to post-graduate medical courses and for obtaining a license to practice medicine.

Besides this, the National Eligibility-cum-Entrance Test (NEET), common counselling and NEXT would be applicable to institutes of national importance like AIIMS in order to achieve a common standard in medical education in the country. The Bill was passed with 260 members voting in its favour and 48 against it.

As doctors hold strike in the national capital, the patients have to bear the brunt. Patients coming from Uttar Pradesh, Bihar, and Gujarat for treatment in AIIMS had to leave the hospital premises. They were in queue since Thursday morning and had to leave empty-handed.

Our strike is against some provisions of NMC Bill. Resident doctors have been withdrawn from services. Faculty&consultants are providing services. If govt doesn't listen to us then it would be counted as one of the blackest days in the history of medical fraternity, says a resident doctor

Post Graduate Institute of Medical Education & Research (PGIMER), Chandigarh will also stage a protest along with the Indian Medical Association (IMA) against the Bill. "In response to the call by the Indian Medical Association and Resident Doctors` Associations across the country the ARD PGIMER Chandigarh has its full and unconditional support for the cause of nationwide protest against NMC Bill," PGIMER said in a press statement.

At 2 pm, the doctors of AIIMS will take out a protest march till Parliament against the Bill.

Maulana Azad Medical College is also protesting against the Bill.

In a letter late on Wednesday night, the Resident Doctors' Association of VMMC and Safdarjung Hospital wrote that they will withdraw all hospital services-including Emergency services and go on an indefinite strike from 9 am on Thursday.

The indefinite strike comes on the same day when the Bill will be tabled in the Rajya Sabha. The Outpatient Department (OPD) and emergency services are likely to be hampered due to the strike.

Doctors across the country went on a 24-hour medical strike from 6 am on Wednesday, withdrawing all non-essential services. The Indian Medical Association (IMA) called for the strike in protest against the passage of the Bill.

While the Centre has called the NMC bill a game-changer set to transform medical education and services in India, many members of the medical fraternity disagree. One of the primary concerns over the NMC Bill is that it will give a boost to quacks and quackery practitioners in rural areas. Doctors claim, under Section 32 of the NMC bill, nearly 3.5 lakh community health providers – mostly quacks-- would be legalised to prescribe drugs.