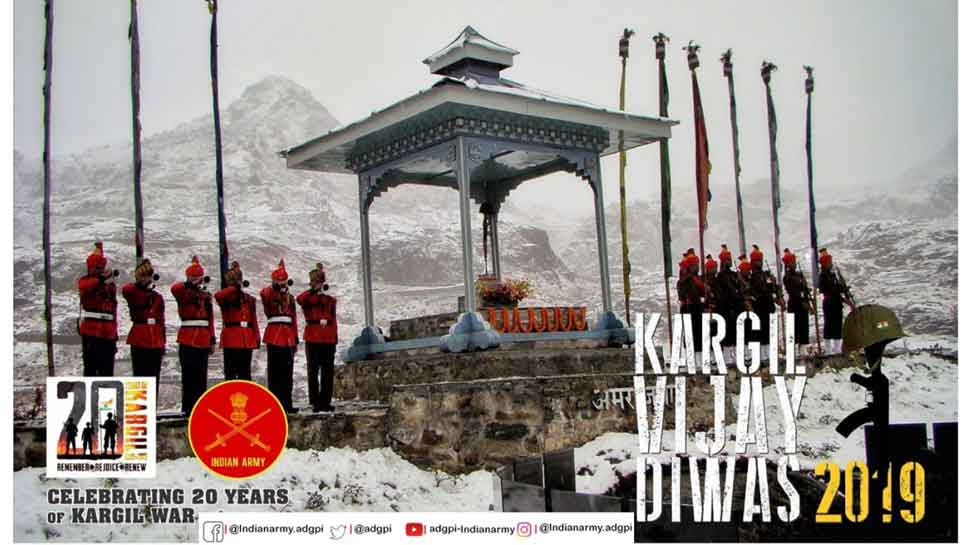 New Delhi/Srinagar: A number of events have been planned by the Army in Delhi and Dras in Jammu and Kashmir next month to mark the 20th anniversary of the 'Kargil Vijay Diwas', officials said Friday. The anniversary celebrations for this year will be spread over three days from July 25-27.

"However, as part of the build-up to the main event, numerous activities have been planned to be organised all over the country from the first week of July," an official said. The celebrations in the national capital begin on July 14 with the illumination of a 'Victory Flame' from the National War Memorial here, which would traverse through 11 towns and cities to finally culminate at Dras where the flame will be merged with the eternal flame at the 'Kargil War Memorial', he said.

The torch relay team will conduct educational and patriotic talks and will interact with the prominent personalities and students in various educational institutes, the Army said in a statement. The events include expeditions by the units, which participated in the Kargil War, to their respective battlefields at super-high altitude locations such as Tololing, Tiger Hill, Pt 4875, and special national integration camp for NCC cadets hailing from various states and Union territories of the country.

The event will last for 12 days in Leh. Essay and drawing competitions are being organised for school children all across the Ladakh region with thematic topics. "The Year 2019 marks the 20th anniversary of victory in 'Operation Vijay', popularly known as the 'Kargil War'. The Kargil War is a saga of strong political, military and diplomatic actions. The nation shall be celebrating the 20th anniversary of victory this year in Kargil War with pride, honour and inspiration," the Army said.

The Kargil War will always be remembered for its strategic and tactical surprises, the self-imposed national strategy of restraint in keeping the war limited to Kargil-Siachen sectors, and the swiftly executed tri-services military strategy and plans, it said. The Kargil War will also be remembered for the determination and daring junior leadership and the raw courage of our jawans at tactical level, Army said.

The 20th anniversary of the victory is being celebrated with the theme 'Remember, Rejoice and Renew', it said. "We 'remember' our martyrs, by revisiting the sacrifices and instilling pride and respect among us, we 'rejoice' by celebrating the victory in Kargil and we 'renew' our resolve to safeguard the honour of the tricolour," the Army said.

The objective of these celebrations is to evoke the feeling of nationalism and patriotism through nationwide campaigns especially amongst the youth and to pay homage to the valiant soldiers. The events are planned to highlight the stories of valour by our brave soldiers and rekindle the pride among the youth of the country, inspiring those who were too young and those who were not yet born, to form part of the nation's resolve.

"Kargil Vijay Diwas is a special occasion for the people of Ladakh. People of Ladakh shall be participating in the run 'Ek Daud Shaheedon Ke Naam' which would include the citizens from the remotest corner of the region and the brave war veterans from far-flung villages of Ladakh. Popular sports and competitions like polo and archery for the local populace is scheduled along with other festivities," the statement said.

A T-20 cricket championship is being organised in the Ladakh region in the NDS Memorial Stadium which is situated at an altitude of 11,500 ft.
The event is also aimed at nurturing the cricket talent among the youth in the region. The tournament will see teams from the Indian Army, Indian Air Force, ITBP and local clubs from the entire Ladakh region, the Army said.

A wreath memorial ceremony will be organised at the 'Kargil War Memorial' in Dras on the Kargil Vijay Diwas (July 26) to honour the bravehearts who laid down their lives during the 'Operation Vijay', it said.

In Delhi, a 'Commemoration Ceremony' is being organised at the Manekshaw Centre, where a panel discussion with war veterans and serving officers will be organised. The event will be followed by 'Kargil Vijay Diwas Evening', a cultural extravaganza, at the Indira Gandhi Indoor Stadium on July 27.

The nationwide campaigns will have numerous activities to evoke a feeling of nationalism and patriotism, and remember the sacrifices by soldiers, the Army said.