Attacking the Congress-led United Progressive Alliance, she said that the previous government denied benefits to the "martyrs" of paramilitary forces for years but the Narendra Modi government ultimately conferred upon these benefits. 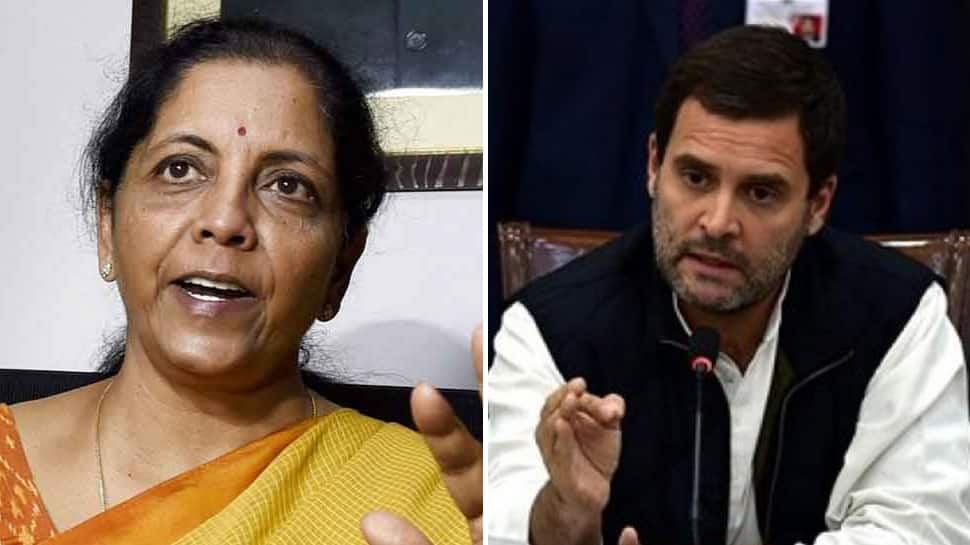 NEW DELHI: Defence Minister Nirmala Sitharaman on  Monday attacked Congress chief Rahul Gandhi over his demand for giving 'martyr' status for paramilitary personnel who have died in the line of duty. She said that those who sacrifice their lives, in official terminology, are given ‘Battle Casualty’ status in Indian Armed Forces and ‘Operational Casualty’ status in Central Armed Police Forces (CAPF).

In a Facebook post she said: "After the Pulwama attack by the terrorists, the Congress President Rahul Gandhi added new dimension to the public discourse for personnel of Para-military forces who sacrifice their lives in the line of duty by demanding that they should be given the ‘martyr’ status that is given to those belonging to the Indian Armed Forces.  Mr. Gandhi doesn’t come from a school of thought wherein it is believed that those who sacrifice their lives for the cause of the nation are indeed martyrs in everyone’s eyes, mind, heart and soul.  These brave soldiers of mother India who sacrifice their lives for the nation, in official terminology, are conferred ‘Battle Casualty’ status in the Indian Armed Forces and ‘Operational Casualty’ status in Central Armed Police Forces (CAPF)."

Attacking the Congress-led United Progressive Alliance government, she said that the previous government denied benefits to the "martyrs" of paramilitary forces for years but the Narendra Modi government ultimately conferred upon these benefits.

"On 3rd March 2011, under the UPA-II government, a cabinet note was moved by the MHA for declaration of CAPF persons who died on active duty as Shahid/martyr. Subsequently, the then Prime Minister, Dr. Manmohan Singh’s office, the PMO, referred the matter to a Committee of Secretaries (CoS) on 14th March 2011. Further on, in the CoS meeting which was held on 14th September 2011, the Committee could not reach a common consensus on giving Shahid/ Martyr status to CAPF personnel who died on active duty. Thereafter, the matter was shelved altogether by the GOI and not taken up further," she wrote.

She added that the Modi government in 2016 increased the ex-gratia lumpsum compensation to the family of deceased CAPF jawans from Rs 15 lakh to Rs 35 lakh in case of death occurring in border skirmishes and action against militants. She also said that in cases of death attributed to acts of violence, the compensation was further increased to Rs 25 lakh in addition to their all other allowances.

"In 2017, The Government further issued guidelines for issuance of ‘Operational Casualty Certificate’ to the Next of Kin (NoK) of CAPFs, Assam Rifles and CPOs personnel confirming another set of benefits to them.  They, along with lumpsum ex-gratia pension to NoK, now get a liberalised family compensation and death gratuity as per rules.  Presently, the compensation payable to our martyrs who have the “Battle Casualty” status in the case of Indian Armed Forces and those who have the “Operational Casualty” status in the case of CAPFs is identical," she added.