Congress has failed to play the role of the main opposition party in the country. Mamata Banerjee cannot be faulted for her “better try than not” move. 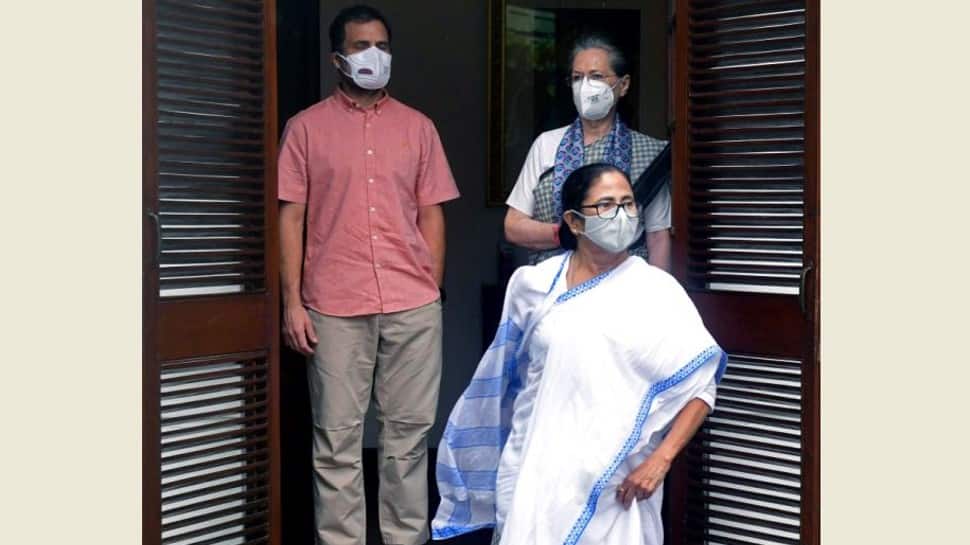 New Delhi: Although it is still two and a half years away, opposition parties have already started making moves eying the 2024 general elections. The challenge before them remains the same – how to compete with BJP, which has been unrelenting for over the last seven years. While no one has managed to crack the puzzle, all political pundits agree upon one thing, and that is, it cannot be done without opposition unity. However, the agreement remains only in principle, to practice it is a different ball game altogether.

Being the largest opposition party, the responsibility squarely lies with Congress. But as Mukul Sangma pointed out as he left the party for TMC, “Congress has failed to play the role of the main opposition party in the country”.

Instead of chalking out alliances with like-minded (read anti-BJP) parties, it is working against the interests of the regional parties, thereby strengthening BJP. In the recent bypolls to two seats - Tarapur and Kusheshwar Asthan - in Bihar, Congress betrayed its ally RJD and put up its candidates to make it a three-way contest. JD (U) won both. Unlike Congress, BJP did not field candidates in the polls in the larger interest of the alliance.

Priyanka Gandhi’s spirited show ahead of the UP polls is another glaring example of Congress’ anti-opposition unity stance. What is she trying to achieve there? The party lost all seats except Rae Bareli in the previous last Lok Sabha polls. Even the then party chief Rahul Gandhi could not save his seat. Out of the 80 seats, Congress managed to be the runner-up party in just three. And, of course, Priyanka had campaigned then as well.

Moreover, instead of limiting her attack to BJP, she is not hesitating to take down Akhilesh Yadav’s Samajwadi Party, a former ally, in her speeches. It is so good for BJP that they might as well consider funding her rallies.

Mamata Banerjee has finally decided to stop waiting for Congress to wake up. She has stepped up effort to form an alternative ‘third front’ by bringing together the regional parties across the country. She even declared the end of UPA.

Riding on the confidence of the thumping victory over BJP in Bengal assembly polls, the TMC supremo is on a mission to occupy the void Congress’ incompetence has created. In the last few days, a string of Congress leaders has junked the party for TMC. The list includes former Goa chief minister Luizinho Faleiro, Sushmita Dev, Kirti Azad, Ashok Tanwar, and the 12 Meghalaya MLAs including former chief minister Mukul Sangma.

Banerjee also has poll strategist Prashant Kishor by her side and RTI activist Saket Gokhale, who claims to have been betrayed by a senior Congress leader.

It is hard to predict whether the fresh acquisitions would help Banerjee at this point, but a leader who emerged from the grassroots very well understands the importance of cadre-based mechanics in the larger scheme of things.

TMC is aggressively campaigning in Goa for the upcoming polls. Being an outsider, it certainly has its task cut out. Interestingly, Shiv Sena, the ruling party of the neighbouring state, has also announced it would contest about 22 seats. In the backdrop of Banerjee’s recent meeting with Shiv Sena leaders in Mumbai, an alliance between the two cannot be ruled out. It certainly wouldn’t have gone untouched during the meet.

Whatever the calculations, it doesn't change the fact that in Goa, the fight is directly between Congress and BJP. Shiv Sena failed to win a single seat in 2017, AAP got zero as well. TMC too is most likely to suffer the same fate. The prospect of a multi-cornered fight is music to BJP’s ears.

Although this data seems to indicate that a combined force of the regional parties could be much stronger than Congress, many of them are not strong enough to take on the dominant BJP, especially in the Hindi heartland.

The ‘third front’ would invariably need Congress. Like it or not, the grand old party’s performance in the Lok Sabha polls would only decide the fate of the opposition. Mamata Banerjee needs to understand this.

As NCP chief Sharad Pawar pointed out, “there is no question of excluding anyone” and invited all parties opposed to BJP to come together.

Opposition unity – What will it be?

For opposition unity to work, Congress must shed its policy of “can’t win, won’t let others win”. There may come a time when it can begin thinking of regaining the lost ground, but that is miles away if it ever comes at all. To believe that the anti-incumbency against BJP could be a window of opportunity for them is a fool’s hope. They are likely to end up losing whatever little they have left.

As far as Mamata Banerjee is concerned, she cannot be faulted for her “better try than not” move borne out of desperation. But if she refuses to take Congress along, 2024 is a lost cause.