Talking to ANI, Sunil Kumar Shahi, SKMCH superintendent said that a patch of plaster from the roof fell off on Sunday but nobody has been injured. 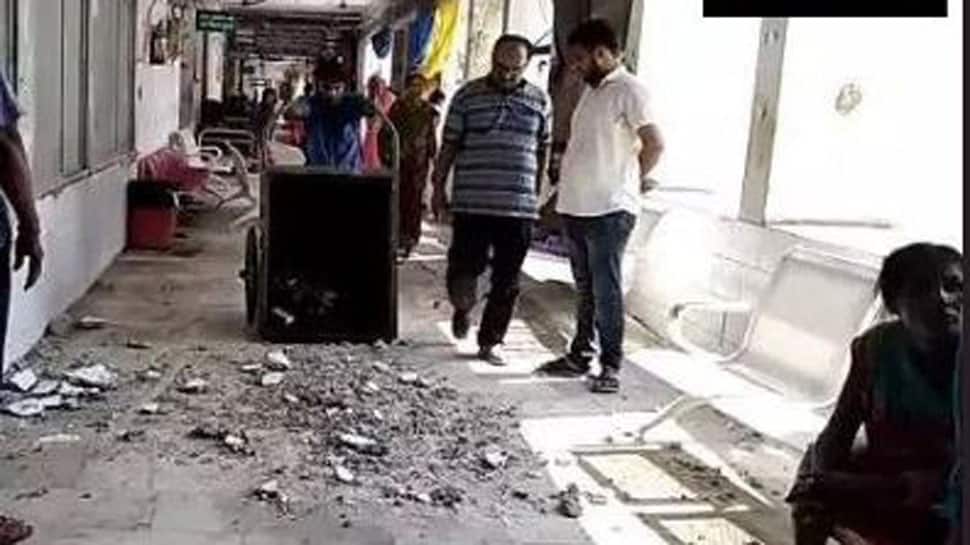 PATNA: A part of roof outside the ICU of Sri Krishna Medical College and Hospital (SKMCH) in Muzaffarpur collapsed on Sunday. No one got injured in the incident. The SKMCH is in news these days as 109 children have died in this government-run hospital due to Acute Encephalitis Syndrome (AES). A total of 169 children have died in Bihar due to AES - a viral disease- outbreak in Bihar, till Sunday.

Bihar: A part of roof outside the ICU of Sri Krishna Medical College and Hospital (SKMCH) in Muzaffarpur has collapsed. No injuries reported. 109 people have died due to Acute Encephalitis Syndrome (AES) at the hospital. pic.twitter.com/vdYPv0ZkOI

Talking to ANI, Sunil Kumar Shahi, SKMCH superintendent said that a patch of plaster from the roof fell off on Sunday but nobody has been injured. Shahi added that the incident did not happen inside any ward, adding that the portion of roof collapsed outside the veranda area. He said that PICU is in between ward number 6-7 but the patch fell between ward number 5-6.

Shahi said that the cases of AES jump during summer and the number of cases will come down with the arrival of monsoon. “AES is known to strike when the summer heat is at its peak and the incidences plummet no sooner than rainfalls lash the area. The same is happening this time and no child has been admitted during the day so far with the complaint even though AES patients, who have been nursed back to recovery, are being discharged continuously," he told PTI.

On Saturday, Minister of State for Home Affairs Nityanand Rai had announced that all 17 BJP MPs in Bihar will build a Pediatric Intensive Care Unit (PICU) in their districts. Rai added that will look after the construction of PICU in Samastipur district. On June 19, the MoS had issued Rs 25 lakh from Members of Parliament Local Area Development (MPLAD) fund for the construction of the PICUs.

Bihar Chief Minister Nitish Kumar had visited SKMCH on Tuesday and had ordered to convert the state-run facility into a 2500-bed hospital. The chief minister had also issued orders saying 1500 new beds for the hospital should be arranged immediately. He had also given directions to build a 'dharmshala' for the relatives and families of the those who are admitted in SKMCH.

No impact of fire on completion schedule of warship 'Visakhapatnam': Navy officials