US President Donald began his address at the Motera stadium in Ahmedabad with a 'namaste', and called Prime Minister Narendra Modi as his "true friend". 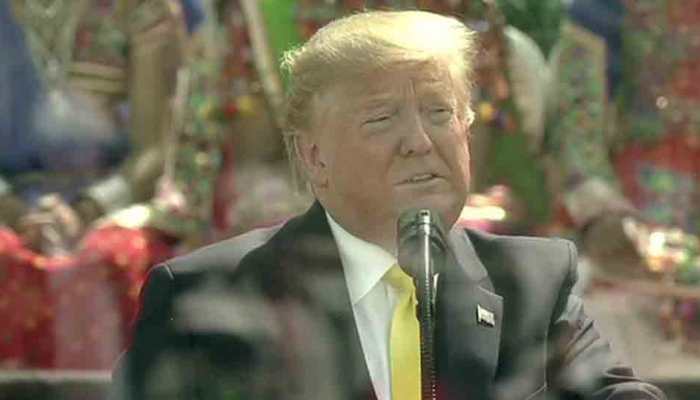 US President Donald began his address at the Motera stadium in Ahmedabad with a 'namaste', and called Prime Minister Narendra Modi as his "true friend". Trump said, "America loves India, America respects India," in front of thousands of people.

Trump said,  "All over the planet people take great joy in watching Bollywood films, bhangra, and classic films like DDLJ and Sholay. You cheer on great cricketers like Sachin Tendulkar and Virat Kohli."

Trump said they would remember India’s “remarkable hospitality”, adding "PM Modi started out as 'tea wallah', he worked as a tea seller. Everybody loves him but I will tell you this, he is very tough.”

Trump said, "We have $3 billion defence deal with India."

Modi said, "Ties between India and the US no longer just another partnership; it is far greater and closer relationship."

US President Trump and PM Modi were welcomed by Home Minister Amit Shah and Gujarat CM Vijay Rupani at the Motera stadium.

US President Donald Trump and Melania's message reads, "To my great friend Prime Minister Modi - Thank you for this wonderful visit!"

Prior to their arrival, PM Modi and Trump took to Twitter to express their feelings. Responding to Trump's tweet in Hindi, saying "we'll meet everyone in a few hours", PM Modi also wrote, "Atithi Devo Bhava (Guest is god)".