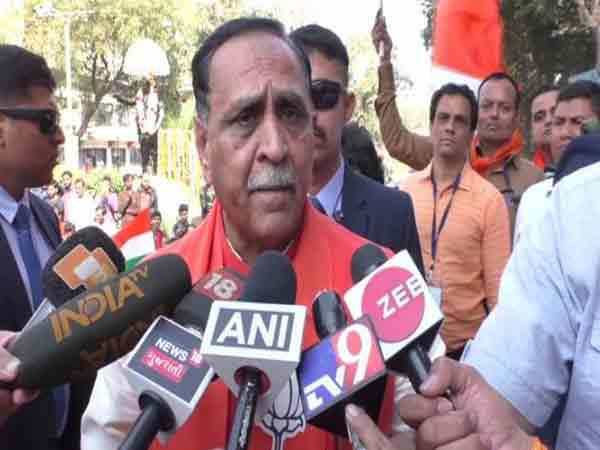 New Delhi: Gujarat Chief Minister Vijay Rupani took part in a rally to support the Citizenship Amendment Act (CAA) and termed it a befitting reply to those opposing the new law. "Our rally is a befitting reply to those who are against the Citizenship law and also to the members of the tukde-tukde gang," said Vijay Rupani in Surat on Sunday (February 9).

Talking to media persons, Gujarat Chief Minister said, "We extend our support for the Citizenship Amendment Act (CAA). This rally is a patriotic rally by the people of the entire state."

The newly enacted law is facing stiff opposition in several parts of the country with some states including Kerala, West Bengal, Rajasthan and Punjab refusing to implement it, while in BJP ruled states, score of people have come in support of the new law.

In Maharashtra, Maharashtra Navnirman Sena (MNS) chief Raj Thackeray on Sunday questioned anti-CAA protests by Muslims, stating that it is difficult to understand their agitation as the new law not meant for them.

Praising the central government for CAA, Raj Thackeray said: "I do not understand why Muslims are protesting against the Citizenship Amendment Act. CAA is not for the Muslims who were born here."

Addressing a mega rally in Mumbai, demanding the ouster of Pakistani-Bangladeshi infiltrators living in the country, the MNS chief asked: "To whom are you showing your strength?"

He said the CAA law made in 1949 during the partition was different from the amended law, adding "I praised the government when they do good things like scrapping of Article 370, construction of Ram Mandir, implementation of CAA among others."

Notably, the CAA grants citizenship to Hindu, Sikh, Jain, Parsi, Buddhist and Christian refugees from Pakistan, Afghanistan, and Bangladesh, who came to India on or before December 31, 2014.

Meanwhile in Kolkata, West Bengal Chief Minister Mamata Banerjee's book against the Citizenship (Amendment) Act was sold out six days after it was launched in the International Kolkata Book Fair, according to her publisher.

Titles favouring and opposing the CAA and the proposed nationwide NRC authored by others were also on high demand in the 12-day book fair which concluded on Sunday.

"All the 1,000 copies of Chief Minister Mamata Banerjee's new title 'Nagarikatta Aatanko' (Fear of Citizenship) were sold out this afternoon. It was launched on February 4 in the book fair," Apu Dey said on behalf of the publishers, Dey's Publishing.

In her book, the TMC supremo talks about the "barbaric uncertainty which has gripped India in the sphere of politics-economy-society everywhere...." The book was sold from the stall of Trinamool Congress mouthpiece 'Jago Bangla', apart from the pavilion of the Dey's Publishing.