The junior doctors are demanding an unconditional apology from Banerjee before talks. 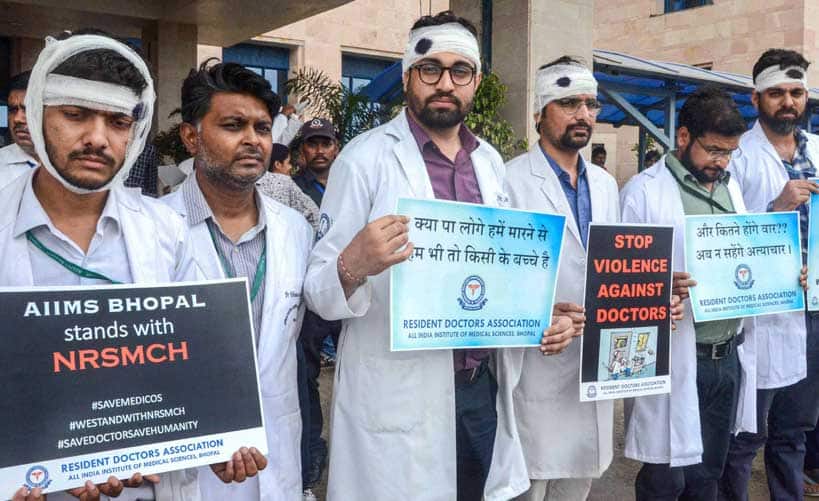 Kolkata: Striking junior doctors rejected West Bengal Chief Minister Mamata Banerjee's invitation for a meeting at the state secretariat, which was called to end the logjam, and continued their protest for the fifth consecutive day on Saturday.

The doctors, who are protesting against the assault on two of their colleagues at NRS Medical College and Hospital here, demanded an unconditional apology from Banerjee and set six conditions for the state government in order to withdraw the stir.

"We are not going to the Secretariat upon the invitation of the Chief Minister for the meeting. She will have to come to the Nil Ratan Sircar Medical College and Hospital and deliver an unconditional apology for the comments she made during her visit to the SSKM Hospital on Thursday," Arindam Dutta, spokesperson of the joint forum of junior doctors, told PTI.

"If she can go to the SSKM, she can also come to the NRS... Or else this agitation will go on," he said.

Banerjee, who visited the state-run SSKM Hospital on Thursday amid slogans of "we want justice", had contended that outsiders were creating disturbances in the medical colleges and the ongoing agitation is a conspiracy by the CPI(M) and the BJP.

On Friday night, the agitating junior doctors declined to attend a meeting called by Banerjee at the state secretariat, saying it was a ploy to break their stir.

After the protesting doctors did not turn up on Friday night, Banerjee asked the students to come to Nabanna, the state secretariat, at 5 PM on Saturday, senior physician Sukumar Mukherjee said.

Mukherjee along with other senior doctors, who were not part of the agitation, met Banerjee on Friday.

They held a two-hour-long meeting with the Chief Minister at the secretariat to find a solution to the ongoing problem.

Notably, over 300 senior doctors across various state-run medical college and hospitals resigned from their services in solidarity with their agitating colleagues.

Governor Keshari Nath Tripathi last evening invited Banerjee to Raj Bhawan for a meeting to resolve the crisis. Banerjee, however, did not respond.

"I tried to contact the chief minister. I called her up. Till this moment there is no response from her. If she calls me up, we will discuss the matter," the governor told reporters after visiting Paribaha Mukhopadhyay, the doctor who was assaulted, at a hospital on Friday night.

Meanwhile, resident doctors of AIIMS and Safdarjung Hospital in Delhi today gave a 48-hour ultimatum to Banerjee to meet the demands of the agitating doctors, failing which they said they would go on an indefinite strike.

The doctors, however, continue to hold symbolic protest by wearing helmets and bandages at work as a sign of protest.

To express solidarity with the doctors who are agitating against an attack on their colleagues in West Bengal, the Indian Medical Association (IMA) has called for a strike on June 17.

The IMA has also decided to continue their protest on Saturday and Sunday condemning the continued suffering of the resident doctors and repeated occurrence of harassments, it said.

These protests will include wearing black badges, dharnas, peace marches. IMA has also requested the support from all associations of the fraternity to join the agitation.

The apex body of doctors in the country also renewed its demand for a central law to check violence against healthcare workers in hospitals and said that the law should provide a minimum sentence of seven-year jail to violators.

Dr Harsh Vardhan had on Friday supported the medical fraternity's demand for a central law to check violence against healthcare workers in hospitals and said such crimes should be made non-bailable.