Stepping up the attack against the government over the three farm laws, Congress leader Rahul Gandhi on Thursday (February 11) alleged that these legislations would damage country's food security system as also "break the spine of farmers" and that the country is being run by only four people with a 'Hum do, Hamare do' approach. 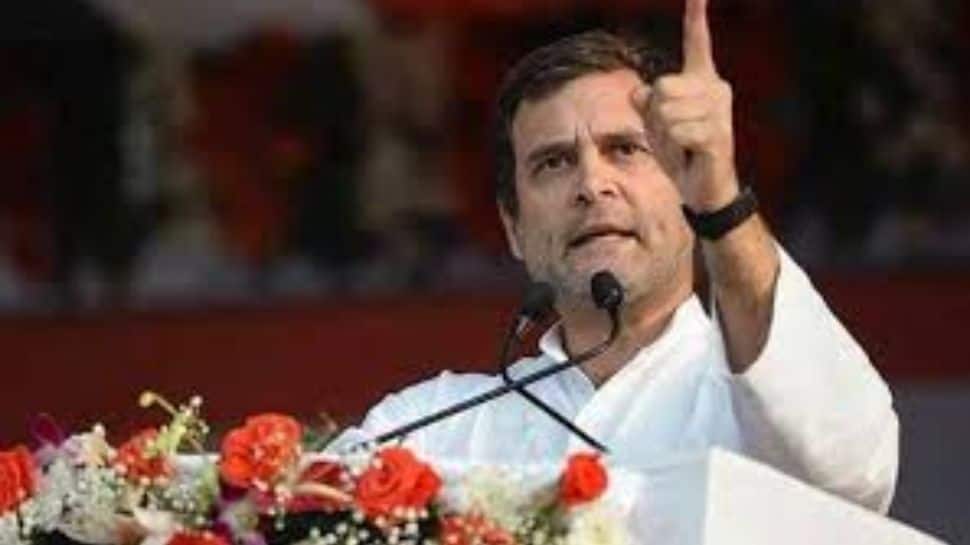 New Delhi: Stepping up the attack against the government over the three farm laws, Congress leader Rahul Gandhi on Thursday (February 11) alleged that these legislations would damage country's food security system as also "break the spine of farmers" and that the country is being run by only four people with a 'Hum do, Hamare do' approach.

Rahul Gandhi, who was participating in the debate on Union budget in Lok Sabha, kept speaking on the three contentious agri laws, triggering protests from BJP members with Parliamentary Affairs Minister Pralhad Joshi urging Speaker Om Birla to direct Rahul to speak on the budget.

When the Speaker told Rahul to speak on the budget, he said he would talk only on the farmers' issue.

Rahul said the Prime Minister, in his reply to the discussions on the motion of thanks to the President's address, had mentioned that the opposition is talking about the farmers agitation but was not speaking about the content and intent of the laws.

"So I thought let us make the Prime Minister happy and talk of the content and intent of these laws," he said, and alleged that "the intent of these three laws is to allow industrialists to buy unlimited quantities of foodgrains and hoard them as much as they want."

Claiming that these measures will end the 'mandis' and will end the Essential Commodities Act, he said, "the new farm laws will destroy India's food security system and will hurt rural economy. The farmers are not going anywhere but will overthrow the government."

Invoking the family planning slogan, 'Hum do Hamare do', Gandhi attacked the government and said just 4 people are running the country.

"Now four people are running the country...And everyone knows who they are," he said.

The Prime Minister had said that these laws have given options to farmers, "Yes, options are hunger, unemployment and suicide", Gandhi alleged.

The former Congress chief also said the agitation is not of the farmers alone but a movement of the country and the government will have to repeal the laws.

Asserting that the farmers were only showing the way, he warned the Modi government that the ongoing farmers' protests against three agriculture laws will "dethrone" it from power.

In a dramatic move, Gandhi also led his party members and those from the TMC and the DMK to observe a two-minute silence by standing to mourn the death of farmers during the ongoing agitation. Claiming that "200 farmers" have died during protests, he said he was doing this as the government has not paid tributes to them.

Gandhi also accused the government of "destroying the MSME sector and said no new jobs are being created in the country because small industries are dying. Agriculture is a sector of Rs 40 lakh crore. The intent of the laws are to give the monopoly of storing produce to a few persons, and prevent farmers from getting a good price. The idea is to break the spine of the farmers."

As Rahul was speaking, heated exchanges took place between the ruling party members, including ministers and the Opposition, with Joshi citing rules on specific debate and Congress leader Adhir Ranjan Chowdhury asserting that as per rules, discussion of a general point is allowed and agriculture is related to the budget.

Rahul also said first demonetisation hurt the country, then the GST and then the forced migration of labourers during the lockdown.

"We had asked for a separate discussion on farmers. That was denied. In protest I am going to speak only on farmers and not on the budget. These people did not pay homage to dead farmers. I will observe silence for them, please join me," he said before standing and observing silence for two minutes.

Reacting to Gandhi's action, the Speaker said that running the House was his responsibility and for leading the House on paying homage to those who have lost their lives in any tragedy.

"You all are senior members and this is inappropriate behaviour. You can give me this in writing and let me undertake the responsibility I have been given," Birla said.

This woman wants to take loan from President Ram Nath Kovind to buy helicopter; know why