Heavy rains continued throughout Sunday in Mumbai with the IMD placing Mumbai under a red alert for the day “indicating heavy to very heavy rainfall with extremely heavy rainfall at isolated locations.” 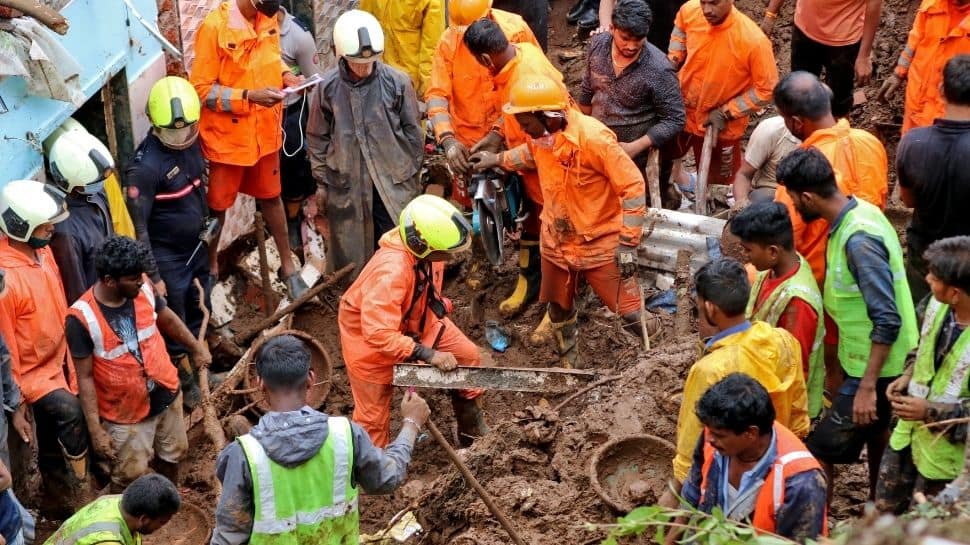 New Delhi: At least 30 people died and several others were injured in rain-related incidents in Mumbai on Sunday (July 18, 2021) as incessant heavy downpour overnight during a major thunderstorm pummeled the city, causing severe water-logging and traffic disruptions, officials said.

Over 19 people died in the Mahul area in suburban Chembur after a wall came crashing down on some houses located on a hillock following a landslide, said BMC on Sunday night. The retaining wall of the Bharatnagar locality collapsed at 1 am. Five people were injured and taken to nearby Rajawadi hospital, the civic body added.

In another rain-related incident, ten hutment-dwellers died as six shanties collapsed after a landslide in suburban Vikhroli at 2.30 am. One person was injured in the incident who was discharged after treatment, the BMC said.

Additionally, a 16-year-old boy died in the suburban Bhandup area after a forest department compound wall collapsed, another official revealed.

The weather experts revealed that Mumbai on Sunday, between midnight and 3 am, recorded over 250 mm of rain and touched 305 mm by 7 am on Sunday.

This incessant heavy downpour resulted in the suspension of train services by the Western Railway and Central Railways in Mumbai and many long-distance trains were terminated or regulated at various stations, officials said.

Heavy rains continued throughout Sunday with the IMD placing Mumbai under a red alert for the day “indicating heavy to very heavy rainfall with extremely heavy rainfall at isolated locations.”

Images from a Doppler radar showed that the thunderstorm had a cloud top height of nearly 18 km, which is around 60,000 feet, the IMD said.

“To put in other words, the height/vertical extent of this monster thunderstorm is approximately twice that of Mount Everest!,” tweeted meteorologist Akshay Deoras.

“Such thunderstorms are definitely uncommon for Mumbai or the west coast during an active phase of the monsoon and in a month like July. The cloud top height of this monster thunderstorm is definitely comparable to the one that produced rains on 26 July 2005,” he said.

“Thunderstorms have already been observed on the following five days in this month: On July 9, 11, 12, 16 and 17,” said Deoras, a PhD student in the Department of Meteorology at the University of Reading in the United Kingdom.

Additionally, the IMD has predicted a severe wet spell for the next couple of days and issued an orange alert for Mumbai and the Konkan coast for the next five days. As per the forecast, winds might blow at the speed of 50 to 60 km per hour. Heavy rains are expected on July 23 as well.

Meanwhile, Maharashtra Chief Minister Uddhav Thackeray on Sunday took stock of the preparedness by various government agencies in the evening to tackle any emergency with the IMD forecasting a severe wet spell for the next couple of days.

Thackeray directed the agencies to remain more alert and asked authorities to keep a watch on landslide-prone areas and dilapidated buildings, the Chief Minister's Office (CMO) said in a statement.

BMC commissioner IS Chahal, who attended a review meeting on the situation chaired by the CM, said that 27 people had lost their lives in the rain-related incidents

"Last night's rain was over 200 mm and in the compound wall collapse and landslide in two different places 27 people lost their lives," he said.

BMC also urged the citizens to boil water before drinking as the flooding has affected electrical equipment in the water purification complex at Bhandup, which controls the pumping and filtration processes there, one of the major sites of water supply to the country's financial capital. The heavy downpour also resulted in the overflowing of Vihar Lake on Sunday morning.

At last, many political leaders including, Prime Minister Narendra Modi expressed anguish at the loss of lives caused by wall collapse incidents in Mumbai. PMO also announced Rs two lakh each for the next of kin of the deceased from the Prime Minister's National Relief Fund. A sum of Rs 50,000 would be given to the injured.

"Saddened by the loss of lives due to wall collapses in Chembur and Vikhroli in Mumbai. In this hour of grief, my thoughts are with the bereaved families. Praying that those who are injured have a speedy recovery," Modi said.