Sources said the Prime Minister made it clear that there will be no compromise on the country`s core interests. They said the RCEP agreement does not reflect its original intent and the outcome is not fair or balanced. 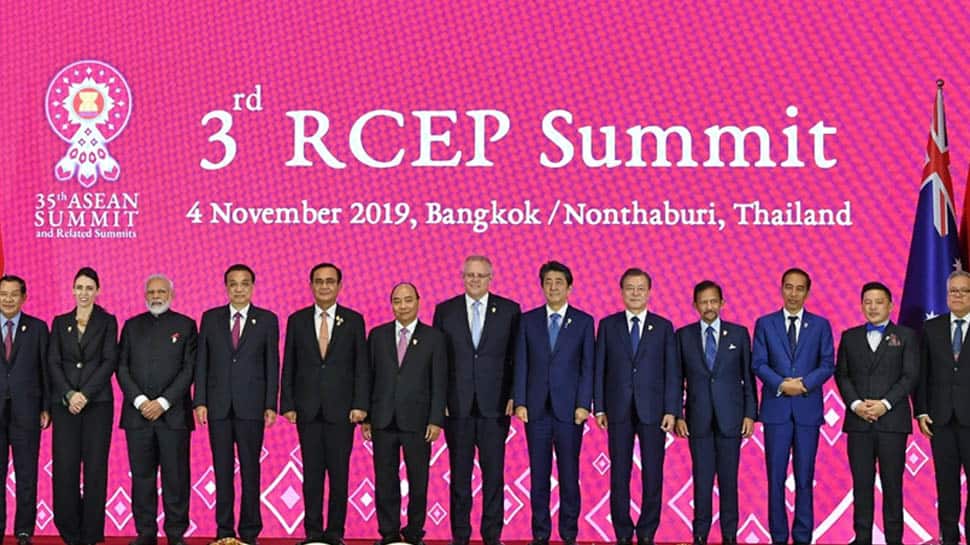 India on Monday decided not to join the Regional Comprehensive Economic Partnership (RCEP) trade agreement as its key concerns were not addressed. According to government sources, Prime Minister Narendra Modi's firm stand reflected a "strong leadership" and the decision not to join RCEP will help country`s farmers, micro, small and medium enterprises (MSMEs) and dairy sector.

Sources said the Prime Minister made it clear that there will be no compromise on the country`s core interests. They said the RCEP agreement does not reflect its original intent and the outcome is not fair or balanced. The sources said that in his speech at the RCEP summit, the Prime Minister said India stands for greater regional integration as well as for free trade and adherence to a rule-based international order. PM Modi decided that there would be "no compromise" on the nation`s core interests, as the deal would have impacted the lives and livelihoods of all Indians, especially the vulnerable sections of the society.

The RCEP is free among 10 ASEAN countries--Brunei, Cambodia, Indonesia, Malaysia, Myanmar, Singapore, Thailand, the Philippines, Laos and Vietnam and their six free trade agreement (FTA) partners China, Japan, India, South Korea, Australia and New Zealand.  It is a China-led regional trade pact and could be the world`s biggest trade pact. The agreement, which requires the gradual elimination of tariffs, would open up the country`s domestic markets to a flood of cheap Chinese goods and agricultural produce from Australia and New Zealand that would harm local producers. PM Modi said there were no assurances for India on market access and non-trade barriers in the RCEP pact. RCEP member states account for 3.4 billion people with a total gross domestic product (GDP) of $49.5 trillion, approximately 39 per cent of the world`s GDP, with the combined GDPs of China and India making up more than half that amount.

What are the key issues behind India`s decision?

The key issues behind India`s decision include inadequate protection against import surge, insufficient differential with China, possible circumvention of rules of origin, keeping the base year as 2014 and no credible assurances on market access and non-tariff barriers. PM Modi told the summit that Indian farmers, traders, professionals and industries have stakes in such decisions. Equally important are the workers and consumers, who make India a huge market and the third biggest economy in terms of purchasing power parity, he said. "When I measure the RCEP agreement with respect to the interests of all Indians, I do not get a positive answer. Therefore, neither the talisman of Gandhiji nor my own conscience permits me to join RCEP," said PM Modi.

What are the other issues on which the decision was taken?

India has been consistent in raising the issues right from day one during the RCEP negotiations. Some issues on which India made its stance clear included the threat of circumvention of Rules of Origin due to Tariff Differential. India pushed for a fair agreement which addressed the issues of trade deficits and opening of services. India also asked for safeguard mechanisms to prevent import surges and safeguard the interests of domestic industry. India also raised the unviability of MFN obligations where India would be forced to give similar benefits to the RCEP countries that it gave to others. There was also no credible assurance for India on market access and non-tariff barriers. India also had "very valid concerns" on keeping 2014 as the base year for tariff reductions, sources said. He said that in the seven years since the negotiations over RCEP began, "many things, including the global economic and trade scenarios, have changed." "We cannot overlook these changes. The present form of the RCEP agreement does not fully reflect the basic spirit and the agreed guiding principles of RCEP. It also does not address satisfactorily India`s outstanding issues and concerns," added PM Modi.

Is there any scope of India joining the agreement at a later date?

Vijay Thakur Singh, Secretary East in the Ministry of External Affairs, reiterated that India has "conveyed that we will not be joining the RCEP". "We have had a very clear and principled position for a fair and balanced outcome for RCEP, and when we did not see that we took the right decision in the national interest," she added.

After the RCEP summit, Singh said that India has participated in "good faith in the RCEP discussions and negotiated hard with a clear-eyed view of our interests." "In the given circumstances, we believe that not joining the agreement is the right decision for India," she said. However, India will continue to "persevere in strengthening our trade investment and people-to-people relations" with the region, she said.

While conveying that India will not join the trade deal, PM Modi spoke of Mahatma Gandhi`s "advice of recalling the face of the weakest and poorest and then ask if the steps are of any use to them".

The other 15 nations in a statement said that they have concluded text-based negotiations for all the 20 chapters and all their market access issues. They have been tasked to do the legal scrubbing so that the deal can be signed in 2020.