A special prize was given to CPWD for the floral decoration in New Delhi. 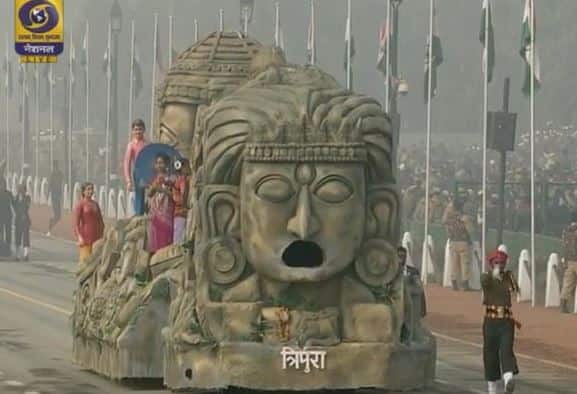 NEW DELHI: In a proud moment for Tripura, the state has bagged the best state tableau in this year`s Republic Day parade. The theme of Tripura's tableau was 'Empowering Rural Economy the Gandhian Way.'

Jammu and Kashmir's tableau bagged the second position, while Punjab ended at the third place. Defence Minister Nirmala Sitharaman presented the awards to the winners on Monday during a function in New Delhi.

A special prize was given to CPWD for the floral decoration in New Delhi.

Talking to ANI, Tripura's Information and Cultural Affairs Deputy Director Bhaskar Das Gupta said, "It was a test for the best and the state depicted the thoughts of Mahatma Gandhi towards the rural economy through its tableau"

"It is a matter of privilege to be a part of the Republic Day parade and getting the second prize from the Defence Minister," said Nazir Ladakhi, Deputy Secretary, Jammu and Kashmir government.

Punjab won the third prize for depicting the Jallianwala Bagh incident in a beautiful manner. Gurkirat Kripal Singh, Secretary, Information and Public Relation of Punjab government, said this year the nation was observing the centenary of Jallianwala Bach incident and "We are keen that the incident is showcased so that people know about it."