This is your nation, have faith in it: J&K Governor Satya Pal Malik to Kashmiris

On the occasion of the 150th birth anniversary of Mahatama Gandhi, Jammu and Kashmir Governor Satya Pal Malik said that people of Kashmir should live with the faith that India is their country. He added that India was Gandhi's nation and Gandhi had seen light in Kashmir. 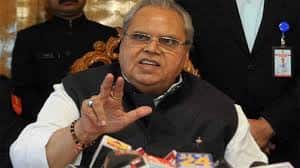 Srinagar: On the occasion of the 150th birth anniversary of Mahatama Gandhi, Jammu and Kashmir Governor Satya Pal Malik said that people of Kashmir should live with the faith that India is their country. He added that India was Gandhi's nation and Gandhi had seen light in Kashmir.

Speaking to news agency ANI, the Governor of the newly-formed Union Territory of Jammu and Kashmir, Malik also emphasized on the importance of restoring normalcy in the former state and said, "When there was violence in India & Pakistan, Mahatma Gandhi came here and said that he sees light in Kashmir, as everyone one was living in harmony. We have to follow it. We have to make it the same Kashmir."

At the same time, Malik asserted that there was a need for the rest of India to embrace the Kashmiris and respect them, in order to get along well.

On Wednesday, Malik participated in the massive plastic waste collection drives under the ‘Swachhta Hi Seva’ campaign organised as a celebration event for the 150th birth anniversary of Mahatma Gandhi, Father of Nation.

Expressing gratitude to the cleanliness volunteers for their contribution towards ensuring cleanliness, the Governor appreciated them for their commitment towards keeping their localities neat and clean. He made several announcements for the 'safai karamcharis', including the provision of full health and life insurance and making available houses along with all basic amenities to them at affordable prices.

The remarks from the J&K Governor came after the Centre, on August 5, abrogated Article 370 that granted special status to the state of Jammu and Kashmir. With the passing of the J&K Reorganisation Bill, the Centre further divided Jammu and Kashmir into two Union Territories.

Following the revoking of special status granted to Jammu and Kashmir, the central government had imposed certain restrictions in parts of Jammu and Kashmir in order to maintain the law and order situation and ensure that violence does not ensue. Seeing the peaceful situation in the Valley, the administration has lifted restrictions easing movement of people in Kashmir.