The cyber cell of Mumbai Police has registered a complaint against a group of TikTok users over their videos in relation to the alleged lynching of Tabrez Ansari.

Mumbai: The cyber cell of Mumbai Police has registered a complaint against a group of TikTok users over their videos in relation to the alleged lynching of Tabrez Ansari.

Shiv Sena activist Ramesh Solanki filed a complaint against TikTok group that goes with the name 'Team 07'. The members of the group-- Faisal Shaikh, Hasnain Khan, Faiz Baloch, Adnan Shaikh and Sadhan Faroqui have a combined followers strength of over four crore people.

The video, allegedly in support of Tabrez, was uploaded on the social media app TikTok. Later, it was posted on Twitter, where it received criticism for spreading hate speech and animosity.

Solanki, in his complaint, said that the video talks about how "the public at large may have killed Tabrez, but if tomorrow, his progeny exercises revenge then he mustn't be a called a 'Muslim Terrorist' 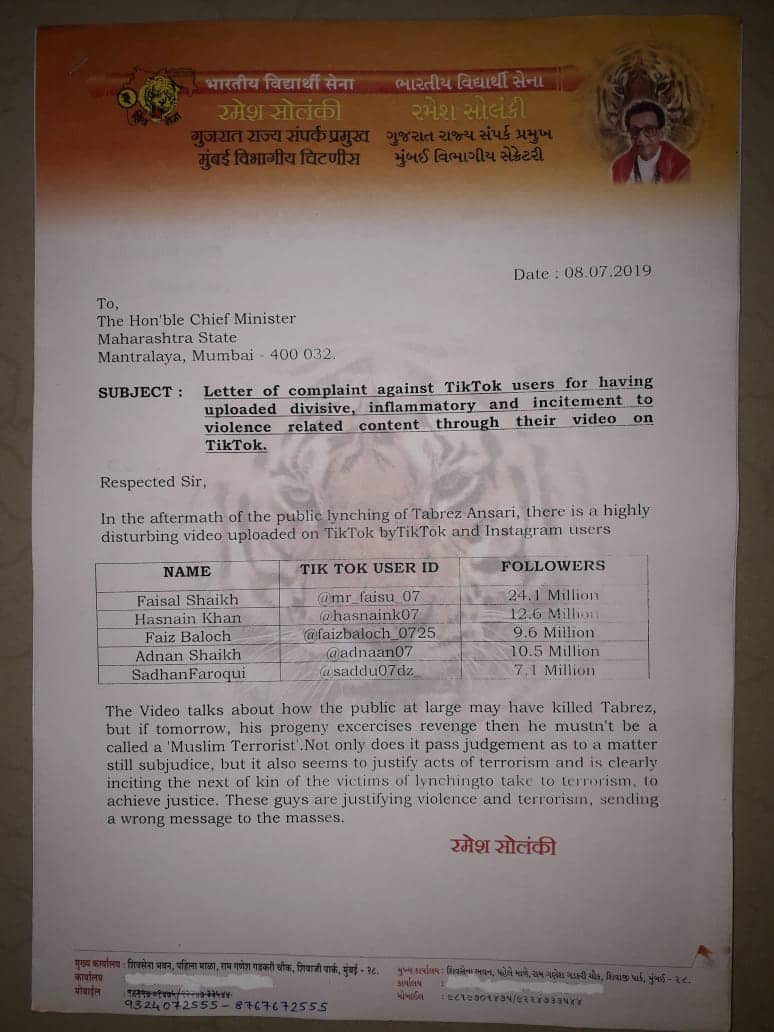 "Not only does it pass judgement as to a matter still subjudice, but it also seems to justify acts of terrorism and is clearly inciting the next of kin of the victims of lynchings to take to terrorism to achieve justice. These guys are justifying violence and terrorism, sending a wrong message to the masses," Solanki added.

Taking note of the videos, TikTok removed the video from its app calling it a "violation of their community guidelines." It further said that it will continue to take appropriate action against such videos.

The case has been registered under sections 153(A) and 34 of Indian Penal code (IPC) at Mumbai's LT Marg Police station.

In June 2019, Tabrez Ansari, who was going home in Jharkhand's Jamshedpur, with some friends, when he was attacked by a mob barely five kilometres from home, on an accusation of theft.

The mob tied him to a pole and beat him for hours. Videos of his getting tortured were widely circulated which showed his attackers forcing him to chant "Jai Shri Ram" and "Jai Hanuman". Later, he was handed over to the police. After four days of police custody, He was declared dead when taken to a hospital.

Tabrez's death led to nationwide anger and a Special Investigation Team (SIT) was constituted to probe the case.