Prime Minister Narendra Modi praised the Budget for its "vision and action". Hailing the budget, the PM said it will accelerate economic growth, financially empower every citizen and strengthen the foundation of the economy in the new decade. 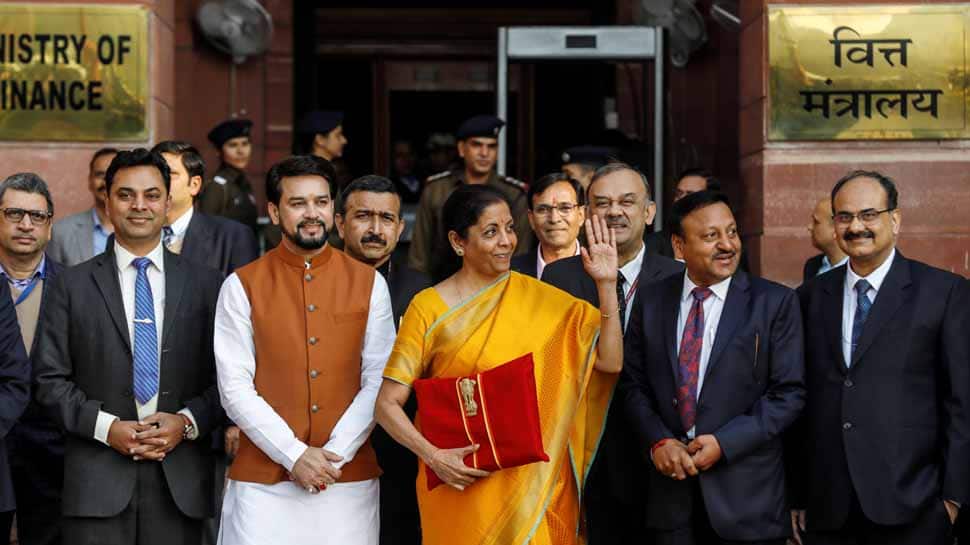 Union Finance Minister Nirmala Sitharaman on Saturday rolled out several reforms to reach out to the remote regions, the objective of which is to energize Indian economy in the short term, medium and long terms. Sitharaman presented the first budget of the third decade of the 21st century. The Union Budget has been drafted with the prime objective of "Ease of Livelihood" and it takes care of all sections of society.

Prime Minister Narendra Modi praised the Budget for its "vision and action". Hailing the budget, the PM said it will accelerate economic growth, financially empower every citizen and strengthen the foundation of the economy in the new decade. Praising it for having both "vision and action", PM Modi said its provision of faceless appeal, new and simple structure of direct tax, move towards unified procurement system, stress on disinvestment are some of the steps which will reduce the government out of people's lives and will enhance their "ease of living".

"I believe that this budget will increase income and investment, increase demand and consumption, bring new vigour in the financial system and credit flow," he said The budget, PM Modi noted, will meet the current needs of the country as well as the future expectations in the decade.

PM Modi was joined by top BJP leaders in hailing it. The ruling NDA's leaders were euphoric in their praise for the budget.

BJP president J P Nadda showered encomiums on the budget, the seventh in a row from the Modi government, calling it "visionary, futuristic, growth-oriented, transformative and all-inclusive" and saying that it will ensure the development of all sections of society. The budget reflects aspirations, hopes and faith of the country, he said, adding that it will give impetus to the fulfilment of aspirations of the middle-income groups with a focus on home for all and by offering relaxation in income tax.

Union Railway Minister Piyush Goyal said, "It is a balanced Budget which prepares India for the decade ahead of us and prepares it to be a five trillion dollar economy. It also covers a vast canvas both on the social side, on economic development and ensures that we continue to remain an economic powerhouse. If a small part of Life Insurance Corporation (LIC) goes to the public it will increase transparency & accountability, after all, it is public's property, I don't think there is any harm if a small part of it is with the people. Rahul Gandhi didn't seem very enthused with the budget if he has any issue-based questions I can answer them but if he only wants to use adjectives, I'm seeing 10 times better adjectives that are positive on the television."

Karnataka Chief Minister BS Yediyurappa has described the Union Budget as pro-people, pro-farmer and pro-poor. He congratulated PM Modi and Sitaraman for giving such a pro-people budget. “For the first time in the history of the country, priority has been given to farmers, poor and rural areas. This is a boon to the farmers.

BJP ally and Union minister Ram Vilas Paswan, who is a patron of the Lok Janshakti Party, praised the budget as "historic" and "development-oriented". BJP ally JD(U) praised the budget for its initiative on all fronts, but added that more could have been done to address the "rural distress".

However, the Opposition slammed Sitharaman's announcements as "insipid", saying they show that the government is "all talk". Her second budget, which she took a record 160-minute to present, left opposition parties unimpressed with Congress leader Rahul Gandhi saying that it offered no strategic idea or anything concrete, and left the issue of unemployment unaddressed.

Talking to reporters after the presentation of the budget, Rahul said it does not address the main issue of unemployment confronting the youth of the country. "I did not see any concrete, strategic idea that could help our youngsters get jobs. There were redundant things in the budget and I did not see any central idea," he said. "It describes the government quite well. There is a lot of repetition, a lot of rambling and nothing concrete. It describes the mindset of the government, all talk, all talk, all talk, and nothing happening," the Congress leader added.

Former finance minister and senior Congress leader P Chidambaram accused the government of being in "complete denial" about the economy facing a "grave macroeconomic challenge" and said it has given up on reviving the economy, accelerating growth or creating jobs. Chidambaram said the government's claim of 6 to 6.5 per cent growth next year is "astonishing and even irresponsible". Asked what rating he would give to the budget on a scale of 1 to 10, he took a dig, saying "10 has got a 1 and 0, you can pick either of a number. I am okay with it".

Slamming the budget's proposal to sell a part of the government's share in LIC, West Bengal Chief Minister and TMC president Mamata Banerjee described it as a plan to "ambush" the legacy of public institutions. "I am shocked and appalled to see how the central government plans to ambush the heritage and legacy of public institutions. It's the end of a sense of security. Is it also an end of an era?" the CM said in a tweet.

Opposition leader Sharad Yadav said the economic growth is at a low of 4.5 per cent and the issue of unemployment has become grave but the budget offers nothing to tackle these problems. The budget does not touch on the issues like farmer suicides, poverty, rising inflation, cases of bank frauds, he said, demanding that Sitharaman should "apologise" for "ruining" the economy.

Sitharaman slashed income tax for individuals, subject to their letting go of existing exemptions, abolished dividend tax for companies and announced record spending in agriculture and infrastructure sectors to pull out the economy from its worst slowdown in more than a decade. She raised import duty on a variety of products ranging from tableware and kitchenware to electrical appliances to footwear, furniture, stationery and toys to boost domestic manufacturing.