US President Donald Trump and Melania's message in Sabarmati Ashram: To my great friend Prime Minister Modi - Thank you for this wonderful visit! Earlier, Prime Minister Narendra Modi and US President Donald Trump arrived at Sabarmati Ashram shortly after the latter landed at the Ahmedabad airport. 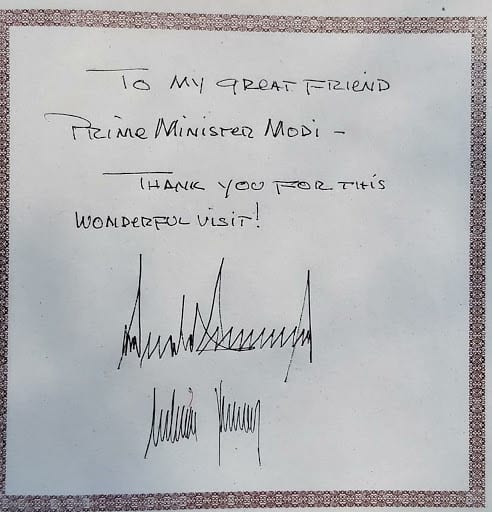 Trump also garlanded the photograph of Mahatma Gandhi along with PM Modi at Sabarmati Ashram. The US President was briefed about Gandhiji and the importance of charkha as a symbol of self-reliance.

They left for the Motera stadium as part of the 22-kilometer roadshow, where they will address the mega 'Namaste Trump' event.

Trump reached Ahmedabad at 11.37 am for the first leg of his India visit.

Prior to their arrival, PM Modi and Trump took to Twitter to express their feelings. Responding to Trump's tweet in Hindi, saying "we'll meet everyone in a few hours", PM Modi also wrote, "Atithi Devo Bhava (Guest is god)".