The incident took place after a bus rammed into a truck on the expressway. 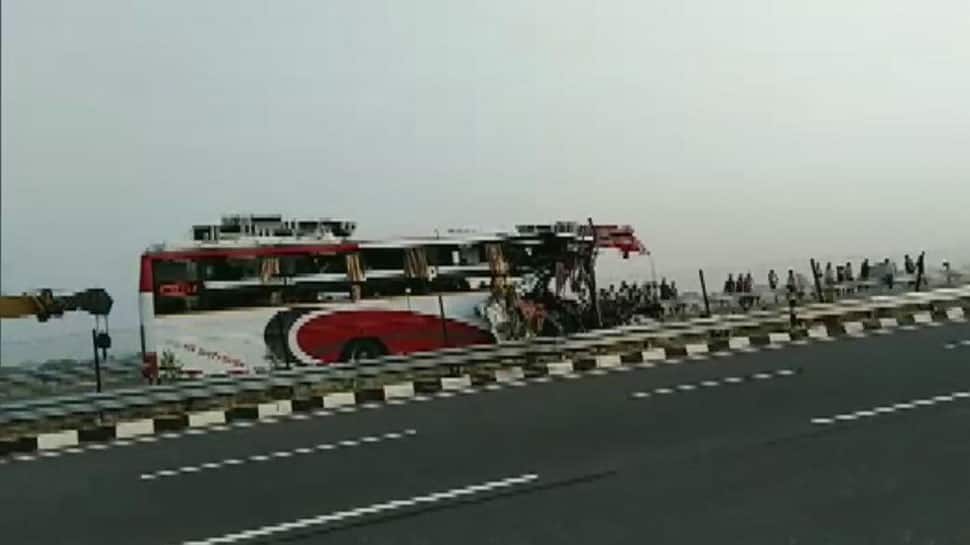 At least seven people were killed and 34 injured on Sunday in a road accident on the Agra-Lucknow Expressway near Mainpuri in Uttar Pradesh.

The incident took place after a bus rammed into a truck on the expressway. The bus lost control and rammed into the truck.

The injured have been sent to Etawah's Saifai, PGI for treatment.

The number of people killed is likely to rise. The bodies trapped in the bus were retrieved by cutting off parts of the bus.

The private bus was on its way from Delhi to Benaras in Uttar Pradesh, when the accident took place.

A crane has been installed for relief work.

This incident happened near the 87 km milestone on the expressway, which comes under the Karhal police station.

The police, including SP Ajay Shankar Roy, is present at the site of the accident for relief work.

This is not the first such accident on the Agra-Lucknow Expressway.

Earlier on April 5, two persons were killed after a truck overturned on the Agra-Lucknow Expressway. The truck, which was carrying rice sacks, caught fire after its diesel tank burst.

The accident happened in Uttar Pradesh`s Mainpuri district. The dead were identified as driver Sukhram and cleaner Irfan.

In 2018, two persons were killed on the expressway when a tourist bus rammed into nearby vehicles, including a police gypsy, at a toll plaza. The bus driver was arrested. The bus was travelling from Muzaffarpur in Bihar to Lucknow in Uttar Pradesh.

Police said the driver of the bus lost control while moving in the queue of the toll plaza and hit other nearby vehicles, including a flower cart. It first hit a florist and then rammed into the railing and jumped into another lane to hit the police gypsy.

The deceased was identified as a toll employee and a florist. Some security guards at the toll plaza were injured in the mishap. One policeman, who was inside the vehicle, was also injured.