Vice Admiral Karambir Singh, the outgoing FOC-in-C will assume charge as the Chief of the Naval Staff on promotion to the rank of Admiral on 31 May 19. 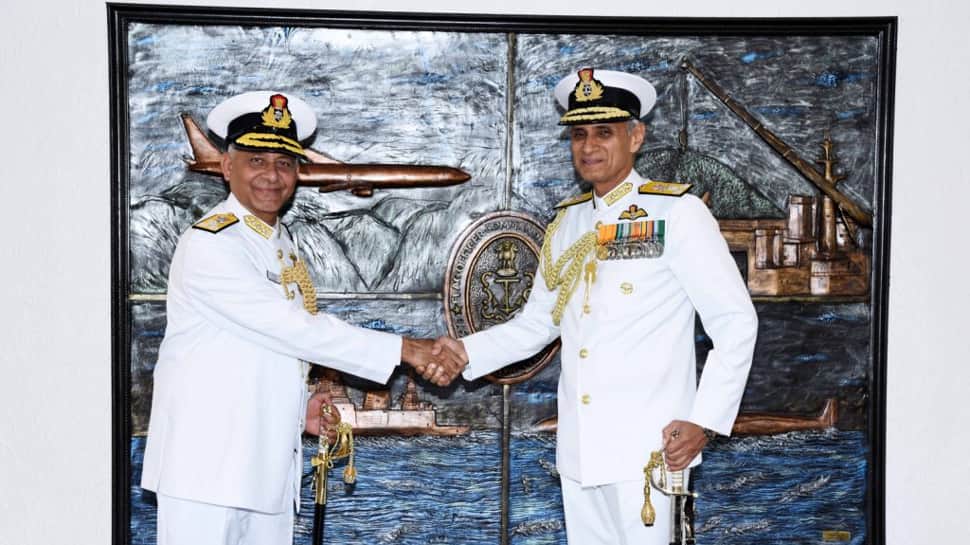 Vice Admiral Atul Kumar Jain, AVSM, VSM took over as the Flag Officer Commanding-in-Chief (FOC-in-C), Eastern Naval Command (ENC) succeeding Vice Admiral Karambir Singh, PVSM, AVSM, ADC at the ceremonial parade held at the Naval Base on 30 May. Vice Admiral Jain inspected the Ceremonial Guard and reviewed platoons of Naval personnel drawn from various ships and establishments of the Eastern Naval Command and attended by all Flag Officers and Commanding Officers of ships, submarines and establishments.

Vice Admiral Karambir Singh, the outgoing FOC-in-C will assume charge as the Chief of the Naval Staff on promotion to the rank of Admiral on 31 May 19.

Commissioned into the Indian Navy in July 1982, Vice Admiral Atul Kumar Jain is an alumnus of Sainik School Rewa, National Defence Academy (Pune), the Defence Services Staff College (Wellington), the College of Naval Warfare (Mumbai) and the National Defence College (Pretoria, South Africa). He is a graduate of Jawaharlal Nehru University (Delhi) and has received his Masters in Defence and Strategic Studies from the Madras University.

After he was promoted to the Flag Rank in October 2011, he was appointed as the first Flag Officer Commanding Karnataka Naval Area. Thereafter, he commanded the Eastern Fleet and had also served as the Chief of Staff, HQ Southern Naval Command. He was promoted to the rank of Vice Admiral on 1 Apr 15 while he was Controller Personnel Services (CPS). The Flag Officer was holding the appointment of Chief of Staff, HQ ENC from Feb 16 to Dec 17 and Deputy Chief of Integrated Defence Staff at New Delhi prior taking over as the C-in-C. For his distinguished service, he was awarded Vishisht Seva Medal in 2009 and Ati Vishisht Seva Medal in 2015.