Zee News' stand on 'international conspiracy behind farmers' protest has been vindicated after Canada link to the R-day violence surfaced. It emerged on Friday that the authors of the toolkit on the farmers’ protest that was tweeted by activist Greta Thunberg were from Canada. 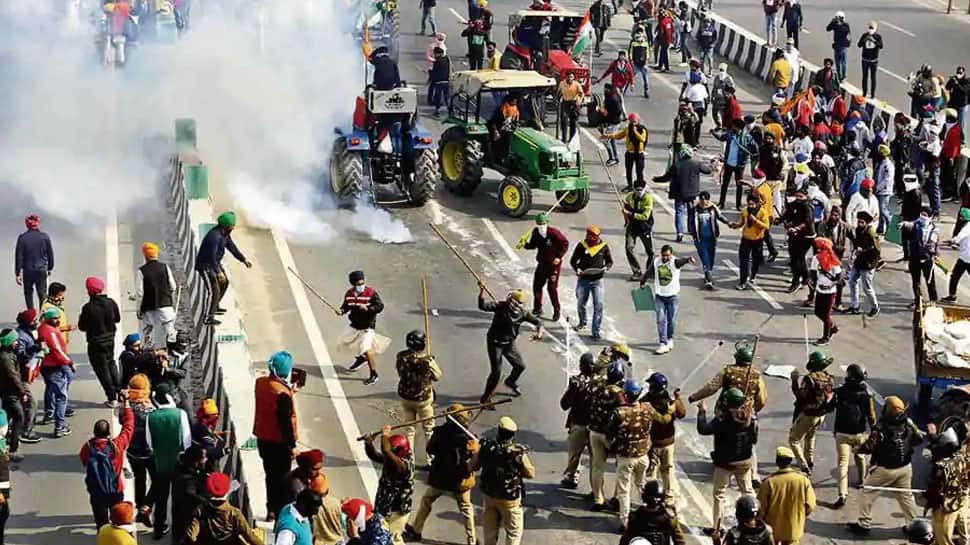 NEW DELHI: Zee News, which is one of the country’s largest media houses, was the first to report that the violence unleashed during the farmers’ tractor rally on the Republic Day was part of a sinister international conspiracy to defame India.

The Zee News’ fearless reporting to unmask the real culprits behind the Republic Day violence got vindicated when evidence suggesting Canada link to the tractor rally violence in Delhi emerged on Friday.

The channel, however, reiterated that the genuine farmers of the country were not angry with Zee News as the truth came forward. The Centre also, meanwhile, accepted the fact that Khalistan supporters have infiltrated the farmers' protest. Attorney General KK Venugopal had told the Supreme Court that the Khalistan supporters have infiltrated the farmers' protests.

Lending credence to Zee News report, it emerged on Friday that the authors of the controversial toolkit on the ongoing farmers’ protest that was tweeted and later deleted by teen Swedish environmental activist Greta Thunberg were from Canada.

Sources on Friday said that the Canada-based Poetic Justice Foundation, a group founded by MO Dhaliwal, had created the toolkit on the farmers' protest for Greta Thunberg. According to the sources, the toolkit was created to garner support for the ongoing farmers’ protest and was allegedly provided to Greta Thunberg as part of a “larger conspiracy to create disharmony”.

Dhaliwal, who is under the scanner of the Indian security agencies, is a known sympathiser of the Khalistani activists and has been part of several anti-India demonstrations abroad.

Canada-based Dhaliwal is a “self-proclaimed Sikh separatist” and also close to top Khalistani activists. Several other organisations, including a PR agency, are currently under the scanner of the Indian security establishment in connection with the controversial toolkit on farmers’ protest, which is being seen as a part of a "larger sinister conspiracy" to defame the Narendra Modi government at the centre.

It also emerged that Dhaliwal had taken part in a demonstration outside the Indian Consulate in Canada on January 26 - the day India celebrated its 72nd Republic day.

Addressing a gathering there, Dhaliwal said that their real goal is to break India into several parts. It may be recalled that Dhaliwal’s uncle, who was eliminated by the Indian security forces during Operation Blue Star in 1984, was a top Khalistani terrorist.

Delhi Police on Friday said that it will write to Google to get the IP (internet protocol) address or the location from where the toolkit document was created and uploaded on the social media platform and shared by Greta Thunberg.

Addressing a press conference, Delhi Police Special Commissioner Praveer Ranjan had on Thursday said they had registered a case against creators of `Toolkit` and no one had been named in the FIR.

"We have not named anybody in the FIR. It is only against the creators of the `toolkit` which is a matter of investigation. Delhi Police will be investigating that case," he said. Ranjan said protests by farmers at Delhi borders have been going on for days and Delhi Police has been closely monitoring several social media accounts.

"We have identified some 300 accounts spreading dissatisfaction and disharmony towards the Government of India. Toolkit account was being run by a group of Khalistanis. They had decided to conduct a digital strike post the Republic Day incident," he said.

"We have recovered a document about the planned execution. We have found out it is a copycat execution. As of now, we have registered cases against the authors of that account. The case has been handed over to the cyber cell. Investigations are underway," he added.

Climate activist Greta Thunberg had posted the toolkit in a tweet on Wednesday which she later deleted. She had also extended support to protest by farmer unions on the borders of Delhi against the new farm laws."We stand in solidarity with the Farmers Protest in India," she had said in a tweet.

Reacting to it, the External Affairs Ministry had said on Wednesday that protests by farmer unions against new farm laws must be seen in the context of India`s democratic ethos and polity, and the efforts of the government and the concerned farmer groups to resolve the impasse.