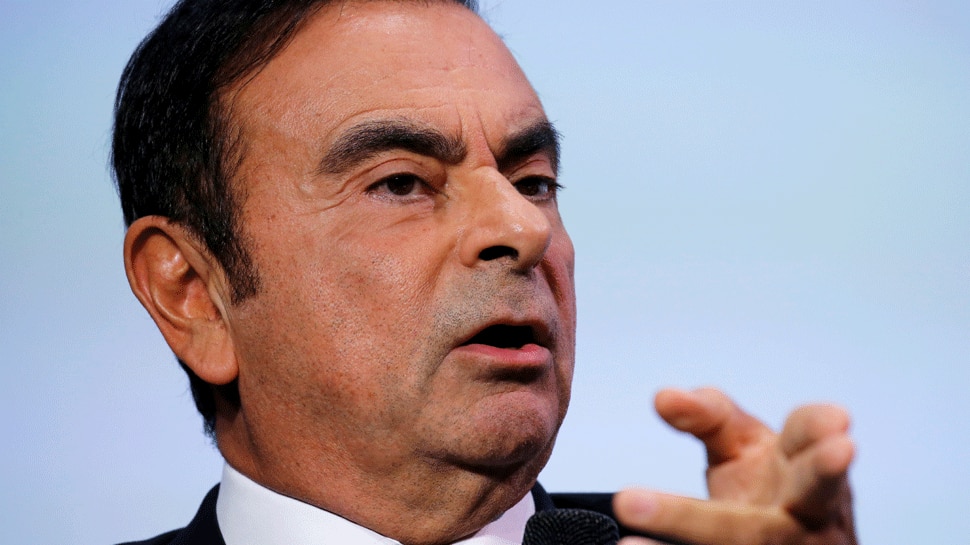 Tokyo: Ousted Nissan Chairman Carlos Ghosn declared his innocence in his first public appearance since his November arrest, telling a Tokyo court on Tuesday that he had been wrongly accused of financial misconduct.

Ghosn, credited with rescuing Nissan Motor Co from near-bankruptcy two decades ago, was brought into the courtroom in handcuffs and a rope around his waist. He was wearing a navy suit and white shirt without a tie, and looked thinner than before his arrest, with his dark hair showing grey roots.

"I have been wrongly accused and unfairly detained based on meritless and unsubstantiated accusations," the 64-year-old executive told the Tokyo District Court in a clear voice, reading from a prepared statement.

"I believe strongly that in all of my efforts on behalf of the company, I have acted honourably, legally and with the knowledge and approval of the appropriate executives inside the company," he said.

From early morning, a crowd of journalists and television crews thronged outside the courthouse, and some 1,122 people lined up for 14 court seats assigned by lottery, highlighting strong interest in the case. News of the hearing was given top billing on public broadcaster NHK throughout the day.

The court hearing, requested by Ghosn`s lawyers, was held to explain the reasons for his prolonged detention since his Nov. 19 arrest rather than to argue merits of the case. Judge Yuichi Tada said the detention was due to flight risk and possibility he could conceal evidence.

But Ghosn used the opportunity to deny accusations against him, kicking off what is expected to be a lengthy counter-attack against the accusations.

Former prosecutor Nobuo Gohara said the court appearance was a public relations victory for Ghosn because it gave him an opportunity to counter the weeks of negative news about him.

"In this high-profile case, news had been dominated by information from the prosecutors and Nissan, so the public tended to view him accordingly," he said. "But today it was all Ghosn. That`s very significant."

After weeks of silence, Ghosn`s lawyers insisted in an afternoon press conference that the courts have no reason to keep him behind bars during the investigation.

But former prosecutor Motonari Otsuru, who heads Ghosn`s defence team, said it was likely Ghosn would stay in custody until the trial starts, which could be in six months, given the practice in Japan of keeping defendants locked up until trial.

The Tokyo District Court said later on Tuesday that Ghosn`s lawyers have asked for an end to his detention.

One of Ghosn`s lawyers, Masato Oshikubo, told Reuters that a reply from the court to the request could come on Wednesday.

Ghosn has been formally charged with under-reporting his income. He has also been arrested, but not yet indicted, on allegations of aggravated breach of trust in shifting personal investment losses to the carmaker.

Regarding allegations that he transferred losses to Nissan, Ghosn said he had asked the company to temporarily take on his foreign exchange contracts after the 2008-2009 financial crisis prompted his bank to call for more collateral.

He said he did this to avoid having to resign and use his retirement allowance for collateral.

"My moral commitment to Nissan would not allow me to step down during that crucial time," said Ghosn. "A captain doesn`t jump ship in the middle of a storm."

Otsuru said that Nissan had agreed to the arrangement, on condition that any losses or gains would be Ghosn`s.

Ghosn said the contracts were transferred back to him and that Nissan did not incur a loss.

Ghosn is also accused of paying $14.7 million to Saudi businessman Khaled Al-Juffali using Nissan funds in exchange for arranging a letter of credit to help with his investment losses.

Ghosn said that Juffali`s company was compensated for "critical services that substantially benefited Nissan", including soliciting financing and resolving a business dispute.

The Khaled Juffali Company has issued a statement saying it had received the payments for legitimate business purposes.

Nissan, which has ousted Ghosn as chairman, reiterated that its internal investigation prompted by an informant had uncovered "substantial and convincing evidence of misconduct" and that its investigation was ongoing and expanding in scope.

The case has rattled Nissan`s alliance with French automaker Renault SA, where Ghosn remains chairman and chief executive. He had been pushing for a deeper tie-up, including potentially a full merger at the French government`s urging, despite strong reservations at Nissan.

French Labour Minister Muriel Penicaud reiterated the government`s call for Nissan and Renault to preserve the alliance, seen as crucial for the two to compete long term amid trends such as autonomous driving.

"The most important thing today is that the presumption of innocence is respected and that we look after the Renault-Nissan alliance. There are many jobs at stake," she told a television news channel.

Ghosn`s arrest has also put Japan`s criminal justice system under international scrutiny and sparked criticism for some of its practices, including keeping suspects in detention for long periods and prohibiting defence lawyers from being present during interrogations that can last eight hours a day.

Ghosn has been held at the Tokyo Detention Center, a spartan facility where small rooms have a toilet in the corner and no heater. His son, Anthony Ghosn, said his father had lost 10 kgs (22 pounds) during his detention, according to France`s weekly Journal du Dimanche.

Otsuru said Ghosn had been moved to a larger room with a western-style bed, but did not say when that had happened.

Nissan`s Representative Director Greg Kelly, who was also arrested on Nov. 19 and has been charged with conspiring to under-report Ghosn`s income, was released on Dec. 25 after posting bail of 70 million yen, or about $640,000, in cash.