The PDP chief alleged that Muslims are still being killed in the name of cow protection. 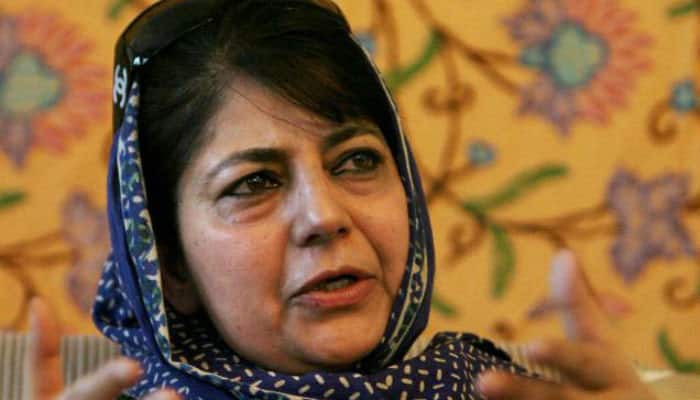 JAMMU: Continuing her tirade against the Narendra Modi-led BJP government at the Centre, PDP chief and former chief minister of Jammu and Kashmir had slammed the ruling party for its 'Hindutva' politics.

Attacking the Centre, Mehbooba said that the BJP government is only interested in changing the names of monuments and old cities bearing Muslim names. She further alleged that the ruling party is only concerned with building a temple in Ayodhya.

''Monuments and old cities with Muslim names are being given Hindu names. There's a race to build the temple. Muslims are killed in the name of cow vigilantism, instead of taking action, the central government puts them in jails under NSA like in MP. Politics is being done in name of Hindutva,'' Mehbooba said.

Mehbooba Mufti: Monuments&old cities with Muslim names are being given Hindu names. There's a race to build the temple. Muslims are killed in the name of cow vigilantism, instead of taking action govt puts them in jails under NSA like in MP. olitics being done in name of Hindutva pic.twitter.com/Vy7iwvlKBy

The PDP chief also heaped praise on Pakistan Prime Minister Imran Khan for his government's good will gesture towards the Kartarpur Corridor.

''In Pakistan, they formed an Act to save temples and want to name a forest reserve and a university after Guru Nanak ji. If you compare, you'll feel that there is some kind of exchange between our nation formed on the foundation of secularism and Pakistan formed on basis of religion,'' she said.

Shifting his focus to other issues, the former Jammu and Kashmir chief minister slammed BJP MP Harish Dwivedi for his sexist remark against Priyanka Gandhi.

Mufti also took to Twitter to express her displeasure.

“Sadly even in today’s modern world, patriarchy plus brazen sexism always raises its ugly head and is normalised. What a woman chooses to wear is none of anybody’s business. Anyone who indulges in such talk clearly needs therapy so I hope he gets well soon,” she tweeted.

Dwivedi had reportedly said that when Priyanka Gandhi is in Delhi, she wears jeans and top but when she comes to the area given to her she wears sari and sindoor.

Priyanka was made in-charge of Uttar Pradesh east as Congress party’s general secretary on January 23.