Counting of votes for Jharkhand election will be held on November 23. 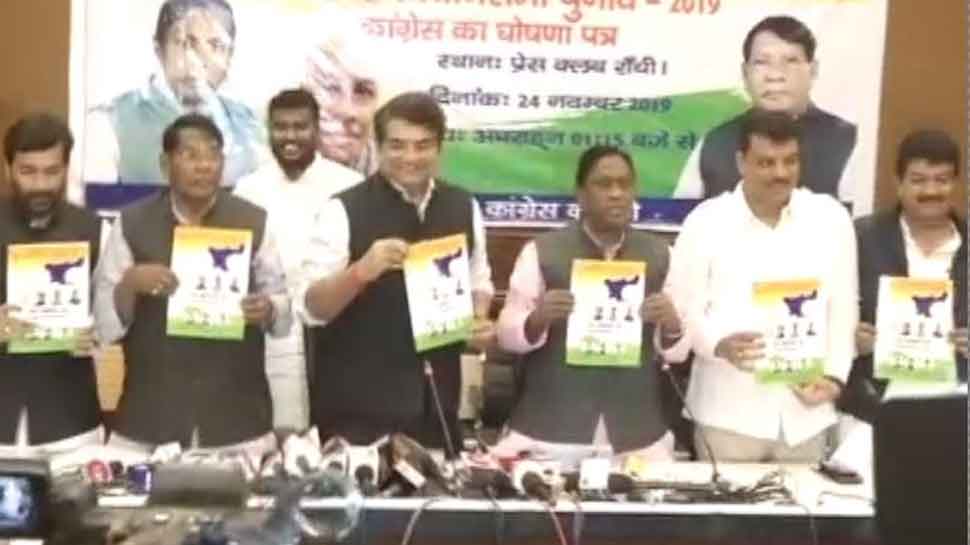 New Delhi: The Congress party on Sunday (November 24) released its manifesto for the upcoming Jharkhand Assembly election which will be held in five phases. The manifesto was issued by Congress Jharkhand election in-charge RPN Singh and along with other top leaders of the state.

Here are some of the key poll promises announced in the manifesto:

Unemployment allowance for youth
Filing up pending vacancies on government posts within six months
Regulations on contract laborers
Loan waiver of up to Rs 2 lakh for farmers
Door-to-door service for government documents
Reduction of domestic power unit charge
To bring parallel fees of private schools
Metro train in Ranchi, Jamshedpur and Dhanbad
Reducing VAT on petrol and diesel
Introduction of women helpline, launch of women recruitment drive
Freeride to women in government buses
Free bicycle for school going girls
Free bicycle to families with income less than Rs 10,000
Ending inspector raj in the state
Upholding the provisions of SPT Act
Restart schools which were shut down in last few years
Bringing strict laws on mob-lynching
Rehabilitation facility for victims
Proposal of Sarna code; separate religious code for people of Sarna caste till 2021
BPL, APL cardholders to get 35 kg of grains instead of 25 kg
Have a Gram Sabha every month
Amendment of CNT Act laws

Voting in Jharkhand will start on November 30 and conclude on December 20.

Counting of votes will be held on December 23. In 2014, the BJP won 35 seats and formed the government with the support of All Jharkhand Students' Union (AJSU), which has now snapped its ties with the party.

Ranchi: Congress releases its manifesto for the upcoming #JharkhandAssemblyPolls pic.twitter.com/mCcDzqtESJ