He claimed that vehicles worth Rs 20 lakh including a Honda car, two Royal Enfield bikes, a Yamaha bike and a Bajaj scooter were torched. 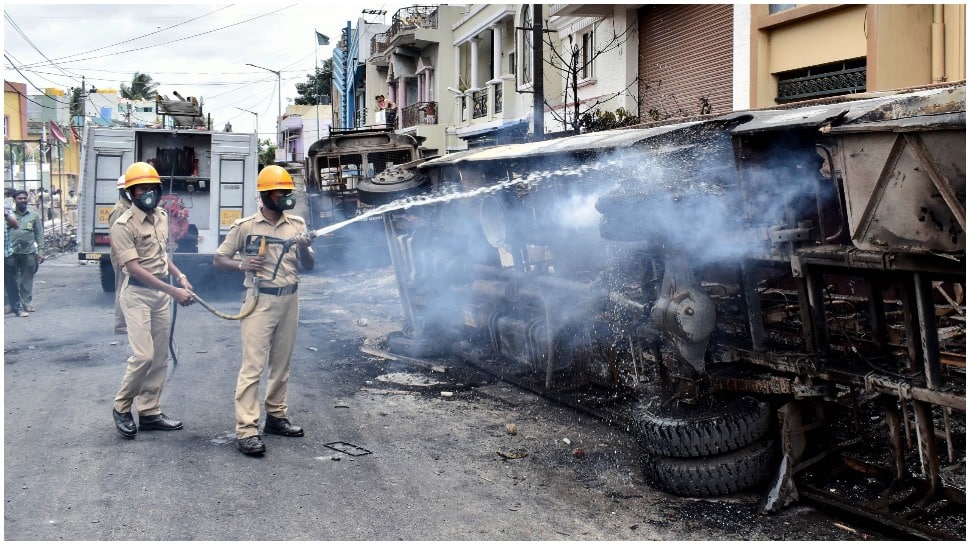 Bengaluru: Congress MLA Akhanda Srinivasa Murthy whose house was ablaze during the Bengaluru violence has claimed that over Rs 20 lakh worth gold was stolen from his house and that Rs 50 lakh property was damaged on the night of August 11.

The two times Congress MLA in a police complaint said that while he along with his family went to a temple, around 2000-3000 miscreants in a "well-planned manner" attacked his house and office.

He said that the mob ransacked the building, burnt it and looted the valuables and jewels.

"Those miscreants completely destroyed the building. When I learnt about it and wanted to come back home, the policemen asked me not to come back in view of the disturbance in the area and to maintain law and order and peace," said Congress MLA in the police complaint filed on August 14.

He added, "On August 13, I went to my house in the police protection only to find my completely burnt house. I was so disturbed after this incident that I couldn't lodge a complaint immediately."

In pics: Bengaluru violence that killed at least 3, injured over 50

He said that the details of the loss to his house and valuables included jewels as around Rs 20 lakh worth 500 grams of gold was stolen.

Murthy said that documents pertaining to his property, vehicles along with six Godrej almirahs, two computers, two laptops, one telephone, and two television sets were also burnt or looted.

He claimed that the damage to his property is over Rs 50 lakhs and vehicles worth Rs 20 lakh including a Honda car, two Royal Enfield bikes, a Yamaha bike and a Bajaj scooter were torched.

The Minister said that the losses that his family suffered is over Rs 3 crore.

As per reports, it is believed that the angry mob targetted Srinivas Murthy's house because of his nephew Naveen who had allegedly shared an insulting Facebook post against Prophet Mohammad which triggered the violence in the city.

So far, more than 250 people have been arrested in connection with the case.

Earlier on August 12, Karnataka Home Minister Basavaraj Bommai said that the state government will seize the properties of those indulged in the violence.

Speaking to reporters in Bengaluru, Bommai said, "We have come to a decision as per the Supreme Court order that when such riots take place and properties are damaged, the loss has to be recovered from those who have caused the damage."