Gowda has represented the Hassan Lok Sabha seat for the six times since 1991. 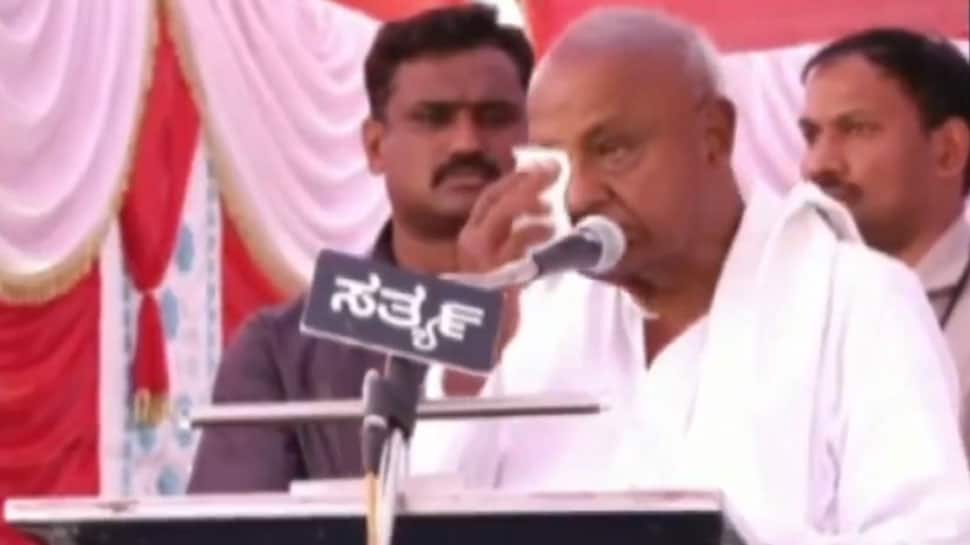 BENGALURU: Former prime minister and Janata Dal-Secular patriarch HD Deve Gowda turned emotional as he announced on Wednesday that one of his grandsons will contest from the Hassan Lok Sabha seat represented by him.

Gowda, who hails from Holenarasipura, has represented the Hassan Lok Sabha seat for six times since 1991, when he first got elected to the Lower House.

"I have decided that I will not be contesting the Lok Sabha elections from here (Hassan constituency)," a teary-eyed Gowda told a gathering of party supporters and well-wishers.

#WATCH Former PM&JD(S) leader HD Deve Gowda gets emotional as he announces that his grandson Prajwal Revanna will be JD(S) candidate from Hassan constituency; says, "With your blessings&blessings of Channakeshava God, I've chosen Prajwal Revanna from Hassan." #Karnataka (13.03) pic.twitter.com/gCE0ZN1yK2

The JDS supremo further added that his grandsons Nikil Kumaraswamy and Prajwal Revanna will contest from party bastions of Mandya and Hassan respectively for the Lok Sabha polls.

The announcement also marked the beginning of the JDS' political campaign for the upcoming Lok Sabha election 2019.

While Nikil Kumaraswamy is the son of Karnataka Chief Minister.

While making the announcement, Gowda also expressed concerns over allegations of promoting dynasty culture in the state.

"...So many allegations, from the morning in the media (they talk about) Deve Gowda, Revanna, Kumaraswamy and their sons," Gowda said as he broke down at an event in Hassan to launch the poll campaign of Prajwal Revanna.

The JDS chief was seen wiping tears and speaking in a heavy voice after which many JD-S supporters present there came near him and pleaded him to calm down.

The JDS supremo will, however, contest the Lok Sabha polls from another constituency, which he is yet to be announced.

It may be recalled that JD-S leader had demanded at least 10 of 28 seats in Karnataka for his party from the coalition ally Congress in the ensuing Lok Sabha elections on April 18 and 23.

The two sides have reportedly agreed to a seat-sharing deal, but a formal announcement is yet to be made.