21 opposition parties to convene at Delhi, before meeting EC officials on Tuesday

The meeting comes amid the exit polls unanimously suggesting another term for the NDA. 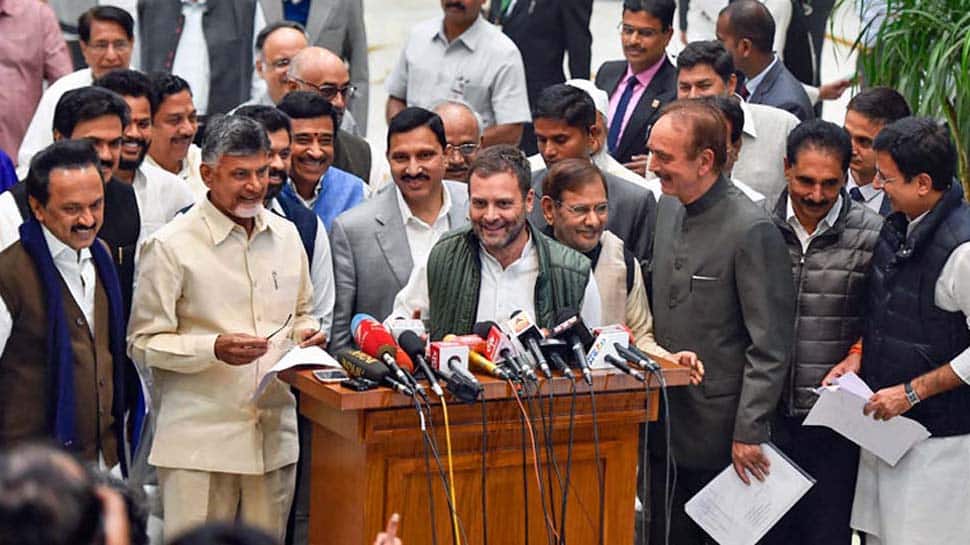 NEW DELHI: A delegation of 21 opposition parties will convene at the Constitution Club in the national capital before heading off to meet Election Commission officials on Tuesday afternoon. The meeting comes amid the exit polls unanimously suggesting another term for the NDA.

Andhra Pradesh chief minister and TDP chief N Chandrababu Naidu, Nationalist Congress Party chief Sharad Pawar, Ahmed Patel and Ghulam Nabi Azad from Congress, TMC's Derek O'Brien, Satish Chandra Misra of Bahujan Samaj Party, Sitaram Yechury of the Communist Party of India (Marxist), D Raja of the Communist Party of India (CPI) along with representatives of Samajwadi Party and Rashtriya Janata Dal are expected to meet at 1.30 pm at the Constitution Club. The team will then head off to meet the EC officials at 3 pm.

Sources suggest that the leaders will raise the issue of tallying paper trail of votes (VVPATs) with electronic voting machine (EVM) figures as per Supreme Court directions. Following the top court's order, the EC will tally the VVPAT slips with five EVMs per assembly segment. However, the opposition has been demanding counter checking VVPAT slips with EVM figures in an entire Assembly constituency in case a discrepancy is found in any polling booth. The delegation will also rake up issues around the poll, added sources.

BJP President Amit Shah is also hosting a dinner for NDA allies in the national capital on Tuesday. Sources indicate the NDA will chalk out their post-election result strategy in the meet. Bihar Chief Minister and Janata Dal (United) president Nitish Kumar, Shiv Sena chief Uddhav Thackeray, Lok Janshakti Party head Ram Vilas Paswan and many more NDA leaders are likely to be in attendance in this dinner-cum-meet which will be held at New Delhi's 'The Ashok' hotel.

The meeting comes amid the exit polls unanimously suggesting another term for the NDA. Exit polls telecast by almost all major new channels have forecast that the BJP-led NDA will cross the majority mark of 272 in the 543-member Lok Sabha.