Prime Minister Narendra Modi will make the last pitch for his party in West Bengal and so will Chief Minister Mamata Banerjee. 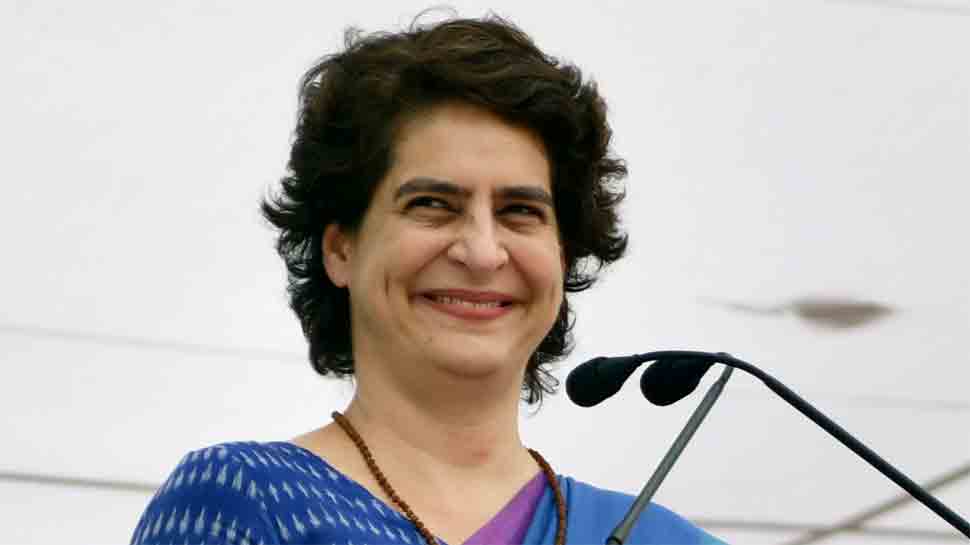 With the Election Commission's order to end campaigning on Thursday night in West Bengal, the political parties on Thursday left no stone unturned to woo the voters across the state. Bharatiya Janata Party (BJP) and Trinamool Congress (TMC), the arch-rivals, had some major rallies scheduled for the day, and they used the platform to

Prime Minister Narendra Modi made the last pitch for his party in West Bengal and held two public meetings in Mathurapur and Dum Dum.

Apart from West Bengal, PM Modi conducted three election rallies in Uttar Pradesh. He addressed Vijay Sankalp rallies in Ghosi, Chandauli and Mirzapur. After an overnight halt at Varanasi, Modi will continue to campaign across the temple town on Friday.

Thanks for joining us. Please do come again on Friday (May 17) for Lok Sabha live updates. Here are the updates from May 16:

# Campaigning ends in West Bengal, polling for nine seats to be held on May 19.

# Congress general secretary Priyanka Gandhi Vadra dared the BJP's 'nationalistic luminaries' to spell out their stand on their Bhopal candidate Pragya Singh Thakur calling Mahatma Gandhi's assassin Nathuram Godse a patriot and said merely distancing from her is not enough. "Bapu's assassin a patriot? Hey Ram. "Distancing yourself from your candidate is not enough. Nationalistic luminaries of the BJP, have the guts to spell out your stand," she tweeted.

# I want to thank the people of West Bengal for their immense support to my party during the election campaigning here. While discharging my duties as the PM, I keep ravelling to various parts of the country during which I get the opportunity to meet a lot of people: PM Modi

# I want to sincerely thank the people of this country for giving me this opportunity to serve them for five years. I have a special connect with West Bengal. I have long been connected with Ram Krishna Mission. I want to salute the land of West Bengal: PM Modi

# Election Commission ordered that SDPO Diamond Harbour (West Bengal) Mithun Kumar Dey and Amherst Street office in-charge Kaushik Das have been relieved with immediate effect. "Both the officers shall not be given any election related posts," it said.

# Election Commission has sought factual report from Chief Electoral Officer, Madhya Pradesh by tomorrow in the matter of Pragya Singh Thakur's statement "Nathuram Godse was, is and will remain a 'deshbhakt'"

# Priyanka Gandhi Vadra to visit Mirzapur on May 18, Friday.

# A person is sent to jail for joking under Didi's rule But infiltrators roam scot free: PM Modi

# Following complaints of bogus voting, Kerala Chief Electoral Officer Teeka Ram Meena on Thursday ordered re-poll in three booths in Kasargode and one in Kannur Lok Sabha constituencies on May 19.

# Election Commission of India declares polls held on April 11 at 5 polling stations of the Chandragiri Assembly constituency and the Chittoor Parliamentary constituency of Andhra Pradesh as void. Re-polls to be held on May 19. Read full report here

# There is a problem here regarding Durga puja & Saraswati puja, saying Jai Sri Ram has become a crime. People of Bengal were troubled by these things since a few years, who brought these issues on a national platform? Which party has become voice of Bengal today, it's BJP: PM Modi in Mathurapur

# TMC goons spread violence, they vandalised statue of Vidyasagar. CCTV cameras were installed there. The way the state govt erased evidences of Narada& Sarada scam, it is trying to remove evidence in the incident. I demand a strict action should be taken: PM Modi

# They allowed Modi ji's rallies and ended campaigning after it. It makes it clear that Election Commission is totally biased. It is very dangerous for the country: Arvind Kejriwal

# We had a meeting y'day, why was it cancelled? Can only the PM hold a meeting? Don't we have any rights in democracy? Only that the Election Commission says will happen? They curtailed our campaign 24 hours ago, now we have to adjust our meetings: Mamata Banerjee

West Bengal CM, Mamata Banerjee: We had a meeting y'day, why was it cancelled? Can only the PM hold a meeting? Don't we have any rights in democracy? Only that the Election Commission says will happen? They curtailed our campaign 24 hours ago, now we have to adjust our meetings pic.twitter.com/kkfDMHr71C

# BJP's Gurdaspur candidate Sunny Deol campaigns in Amritsar. All 13 parliamentary seats in Punjab will go to polls in the last phase of Lok Sabha elections on 19th May, Sunday

Punjab: BJP's Gurdaspur candidate Sunny Deol campaigns in Amritsar; all 13 parliamentary seats in Punjab will go to polls in the last phase of Lok Sabha elections on 19th May, Sunday pic.twitter.com/jWJ03X2HNN

# Modi ji, Amit Shah ji & the state BJP should give their statements & apologize to the nation. I condemn this statement, Nathuram Godse was a killer, glorifying him is not patriotism, it is sedition: Digvijaya Singh

# Alleging that there is "complete constitutional breakdown of governance" in West Bengal, the BJP on Thursday urged the Election Commission to take a number of measures, including action against criminals and history-sheeters, to ensure free and fair polls in the state.

# Hitting out at the Congress for promising to abolish sedition law in its poll manifesto, Union Minister Rajnath Singh Thursday said the legislation will be made more stringent after BJP returns to power at the Centre.

# Former Jammu and Kashmir Chief Minister Mehbooba Mufti and her predecessor Omar Abdullah have extended support to West Bengal Chief Minister Mamata Banerjee, who is locked in a bitter fight with BJP, while questioning the Election Commission`s decision to ban campaigning in the state from 10 PM today.

"Finally there`s a lioness like Mamata Official who can speak the language BJP understands. Leaders like her, Mayawati and Priyanka Gandhi have shown gumption and stood up to the ruling party. These elections are a watershed moment for women in Indian politics entrenched in patriarchy".

"PDP worker Irfan Ahmad all of 21, a first time voter & an upcoming cricketer succumbed to his injuries today. An only son of ailing parents, he supported them by running a pharmacy. Killing someone for their political affiliation is unacceptable. His martyrdom won’t be in vain."

# Trinamool Congress goons vandalised Vidyasagar's statue. We are committed to Vidyasagar's vision and will install his grand statue at the same spot: PM Narendra Modi

# PM told you that he himself will deposit 15 lakh in your accounts and the President of the same party, after the elections said it was a 'chunaavi jumla', will you trust them again? Priyanka Gandhi Vadra asks people in Maharajganj

Priyanka Gandhi Vadra, Congress General Secretary for Uttar Pradesh (East) in Maharajganj: PM told you that he himself will deposit 15 lakh in your accounts and the President of the same party, after the elections said it was a 'chunaavi jumla', will you trust them again? pic.twitter.com/F7EnQeZTor

# BJP Bhopal Lok Sabha candidate Pragya Singh Thakur says 'Nathuram Godse was a deshbhakt, is a deshbhakt and will remain a deshbhakt'. People calling him a terrorist should instead look within, such people will be given a befitting reply in these elections.

# Vandalising statues is one of the habits of BJP, the party has done so in Tripura too: Mamata Banerjee

# BJP destroyed 200-year-old heritage of West Bengal, those supporting the party will not be accepted by society, says Mamata Banerjee

# PM Modi said he will rebuild Vidyasagar statue. Why should we take their money, Bengal has enough: Mamata Banerjee says at a rally.

# Mayawati targeted me and EC though I thought she will lash out at Mamata for way people of UP and Bihar are treated in WB: PM Modi in Mau

# We saw hooliganism by TMC workers again during Bhai Amit Shah's roadshow in Kolkata, they vandalised Ishwar Chandra Vidyasagar's statue. We are committed to Vidyasagar's vision and will install his grand statue at the same spot: PM Modi

# Election Commission has banned campaigning in West Bengal, but from 10 pm today just because PM has two rallies in the day. If they had to ban then why not from today morning? This is unfair and EC is acting under pressure: Mayawati

# It is clear that PM Modi, Amit Shah and their leaders are targeting Mamata Banerjee, its planned targeting. This is a very dangerous and unjust trend and one which doesn't suit the PM of the country: Mayawati

# Always a delight to be among the people. Today will address five rallies across Uttar Pradesh and West Bengal. Do watch the rallies in Mau, Chandauli, Mirzapur, Mathurapur and Dum Dum.

Sharing a video covering parts of my speeches yesterday in Bihar, Jharkhand and Bengal. pic.twitter.com/7UHQETSnWl

# The poll body's decision to ban campaigning in West Bengal a day before its scheduled deadline was in the wake of violence between BJP and TMC workers in Kolkata after Amit Shah's roadshow in Kolkata.