Lok Sabha election 2019: Will Modi remain invincible or can Akhilesh-Mayawati dent the BJP in Uttar Pradesh?

In 2014 Lok Sabha election, the Bharatiya Janata Party had swept the state winning 71 of the 80 seats and 2 others seats being won by its ally Apna Dal. Of the remaining 7 seats, the Samajwadi Party won 5 seats including the Yadav family bastions while the Congress managed to win just 2 seats - Congress chief Rahul Gandhi's Amethi and his mother Sonia Gandhi's Rae Bareli. 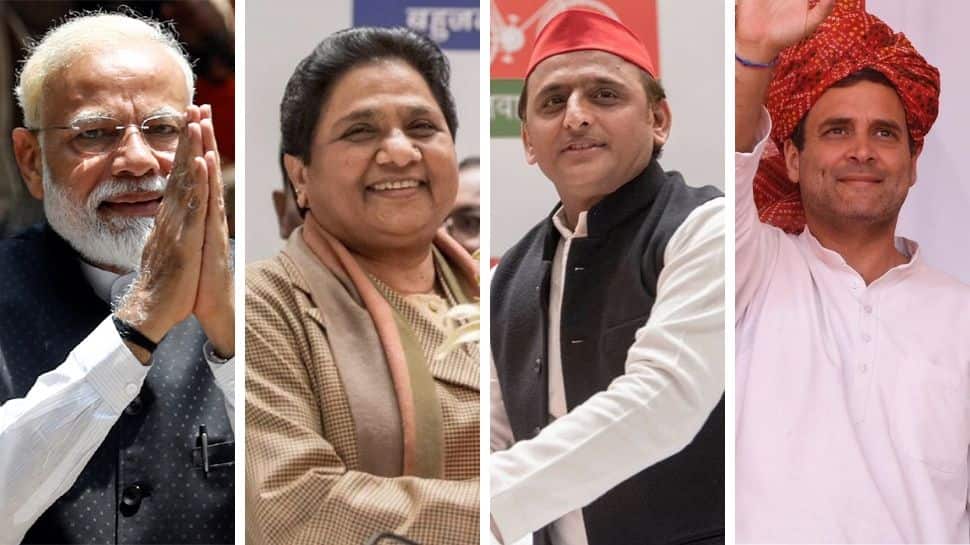 Election after election, it has remained a popular belief that the road to Lok Sabha passes through Uttar Pradesh. The importance of the politically significant state can be determined by the fact that of the 14 prime ministers that India has had since Independence, 10 were sent to the Lok Sabha from Uttar Pradesh. Even Prime Minister Narendra Modi, who contested his first Lok Sabha election in 2014, moved out of his home state Gujarat to contest from Varanasi. The sheer size of the electorate in the state and the fact that it holds power to nearly 15% of Parliament with 80 seats makes it imperative for political parties to lay special focus on the state.

The election in the state in 2019 was held in all seven phases from 11 April to 19 May. The estimated turnout in the state has been 59.60 per cent, which is likely to be the highest ever in the state in Lok Sabha elections so far. Earlier, the highest was 58.44 per cent which was recorded in the 2014 election. The total number of electors this year increased by 3.96 per cent since the previous election with a total of 14,43,16,893 electors who were eligible to cast their votes in 2019.

Varanasi: Prime Minister Narendra Modi is seeking a second term from Varanasi Lok Sabha seat where he is pitted against Congress candidate Ajai Rai. There were rumours earlier that Priyanka Gandhi Vadra may begin her electoral politics by fighting against Modi from Varanasi but Congress fielded Ajai Rai from the seat.

Amethi: Congress chief Rahul Gandhi is fighting a tough battle against BJP minister Smriti Irani. Irani, who gave a strong fight to Rahul in 2014, had spent a lot of time in the constituency to build a support base for her and defeat the Congress chief in 2019.

Rae Bareli: Sonia Gandhi is in a straight contest with former Congress leader Dinesh Pratap Singh who recently joined the BJP in Rae Bareli. She won the seat in 2004, 2006 (bypolls), 2009 and 2014. The SP-BSP alliance has not fielded any candidate against the Gandhis in both Amethi and Rae Bareli.

Azamgarh: Azamgarh was one of the 5 seats where Samajwadi Party founder Mulayam Singh Yadav had won in 2014. His son Akhilesh is contesting the 2019 election from the seat. With an attempt to break into the SP's Yadav base, the BJP has fielded Bhojpuri film star Dinesh Lal Yadav Nirahua against the SP chief.

Mainpuri: Mulayam Singh Yadav is contesting the 2019 election from Mainpuri where he is pitted against BJP's Prem Singh Shakya. The seat has been a Samajwadi Party bastion since 1996. While BSP-SP alliance has not fielded any candidate against the Gandhi, the Congress as a quid pro quo has not named candidates in Mainpuri, Kannauj and Azamgarh, the seats where the immediate Yadav family is contesting.

Lucknow: Union Home Minister Rajnath Singh is seeking a second term from Lucknow, a stronghold of the BJP. The Mahagatbandhan candidate from the seat is SP's Poonam Sinha and Acharya Pramod Krishnam is contesting on a Congress ticket.

Sultanpur: The BJP has fielded Union Minister Maneka Gandhi from the Sultanpur Lok Sabha seat against BSP's Chandra Bhadra Singh and Sanjay Singh of the Congress. Maneka's son Varun had won the Sultanpur seat for the BJP in 2014.

Pilibhit: Instead of the Maneka Gandhi, who won the 2014 election from Pilibhit, Varun will be fighting to retain the seat for the BJP in 2019. It is believed that the swapping of the seats was done as the BJP believed that Maneka has a better chance of surviving the triangular contest in Sultanpur.

Gorakhpur: With Gorakhpur being the home turf of CM Adityanath, the contest for the seat is a prestige battle for BJP. The gathbandhan is a huge obstacle for the saffron party as the BJP lost the Gorakhpur seat in the bypolls that were held in 2018.

Muzaffarnagar: RLD chief Ajit Singh is fighting from the Muzaffarnagar constituency as the mahagathbandhan candidate. Singh is contesting from Muzaffarnagar after he had lost his traditional Baghpat constituency in the 2014 election. He is pitted against BJP's Sanjeev Kumar Balyan who had won the election by a margin of over four lakh votes in 2014.

Rampur: The main contestants in the fray in Rampur are Samajwadi Party leader Azam Khan and his one-time party colleague Jaya Prada who is contesting the 2019 election on BJP's ticket.

In 2014, the Bharatiya Janata Party had swept the state winning 71 of the 80 seats and 2 others seats being won by its ally Apna Dal. Of the remaining 7 seats, the Samajwadi Party won 5 seats including the Yadav family bastions while the Congress managed to win just 2 seats - Congress chief Rahul Gandhi's Amethi and his mother Sonia Gandhi's Rae Bareli.

While there was a Modi wave in the 2014 election, the exit polls in 2019 reflect the uncertainty in the dynamics of the state that could emerge when the final results are announced on 23 May. The key players in the state are Bharatiya Janata Party, which is fighting tooth and nail to repeat its 2014 numbers; the Bahujan Samaj Party and the Samajwadi Party who have fought the election in an alliance along with Rashtriya Lok Dal with the sole objective to defeat the BJP; and the Congress which is trying to renew its political standing in the state and national politics.

- This is the first time that Lok Sabha election is being held when the BJP holds power in Uttar Pradesh with such a huge majority. In the 2017 assembly election in the state, the BJP had won 312 of the 403 seats in the state - its best-ever tally. The parliamentary election may well also be a referendum on the Yogi Adityanath government and its governance in the past 2 years.

- Never say never in politics, was proved right when the SP-BSP joined hands ahead of the Lok Sabha election. BSP chief Mayawati, who had vowed never to come together with the SP after the infamous 1995 guest house scandal when she was reportedly manhandled by members of the latter party, shed her inhibitions and decided to fight in an alliance. In a historic press conference, SP chief Akhilesh Yadav draped a shawl around her, took her blessings and as the bua-bhatija posed for the shutterbugs, the conversation began over how the coming together of the two arch-rivals would impact the fortunes of the BJP in the election. The BSP, SP, RLD are contesting on 38, 37 and 3 seats each in the alliance.

- Priyanka Gandhi Vadra, the name that was the trump card of the Congress, was finally taken out in the 2019 election. While the Gandhi daughter has been campaigning for her brother and mother since the time the two entered electoral politics, Priyanka too took the plunge into politics officially by taking over as party general secretary for UP-East. By giving her the charge of the region, she has directly taken on Adityanath at his home turf and Modi who is contesting from Varanasi.

- Taking action against politicians for violating the model code of conduct, the Election Commission placed several bans on leaders during the poll campaigning. The prominent leaders who faced the EC's heat were Yogi Adityanath, Mayawati, SP leader Azam Khan and BJP leader Maneka Gandhi. Yogi Adityanath faced a 72-hour ban for saying the election is between 'Ali' and 'Bajrang Bali'; Mayawati faced a 48-hour ban for her speech in Deoband where she appealed to Muslims to not vote for a particular party; Azam Khan faced two bans, one for his comments against BJP's Jaya Prada and the next one for remarks against EC and other communal statements; Maneka Gandhi was barred from campaigning for 48 hours after she told Muslims to vote for her, otherwise she may not be inclined to be responsive to their requests.

- BSP has been claiming that EVMs are being transported without security and that is leading to the actual machines are being swapped to suit the BJP. The EC, however, has rubbished the allegations and reassured that EVMs which were used in the election have been stored in strong rooms with 24-hour security and the machines which were being transported were the 'reserve' which are kept on stand by if there is malfunctioning at the time of voting.

Since the time the SP-BSP came together to fight the election as the Mahagatbandhan, speculation was rife over whether the two parties will be able to transfer their votes to each other's candidates. It has been a topic of intense discussion over whether the BJP would be able to retain its 2014 number or would it face a dent on 23 May. The exit polls have also thrown up mixed numbers for the state. While some have shown that SP-BSP-RLD mahagathbandhan is in the lead, the others have given BJP way more seats than all the others combined.