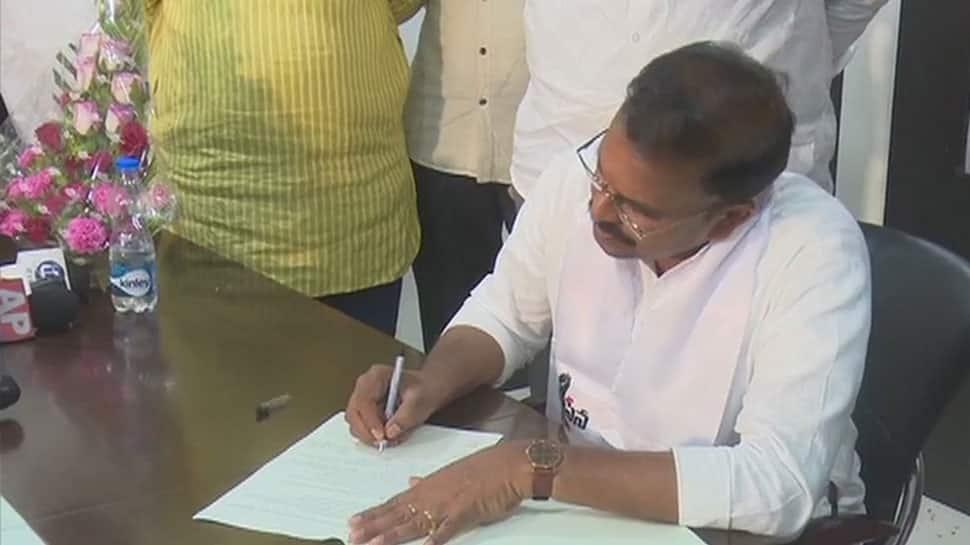 Just five days to go for the first phase of Lok Sabha Election 2019, the poll campaign battle heated up on the ground. From candidates' nomination to special election manifestos, parties are leaving no stone unturned to woo the electorate. Amid all this, the Election Commission and I-T Department continued its crackdown on poll-related illegal activities. Nearly 90 crore voters will elect will the representatives from 543 Lok Sabha constituencies the upcoming polls which will be held in seven phases on April 11, April 18, April 23, April 29, May 6, May 12 and May 19. The results will be announced on May 23.

The Bharatiya Janata Party is observing it's Foundation Day on Saturday. The party was formed on April 6, 1980.

Here are the top developments on Saturday, April 6

Thank you for joining us. Do come back again on Sunday (April 7) for live updates of Lok Sabha election.

* Election Commission has said BJP MP Babul Supriyo's song against which TMC had objected won't be allowed to play. The song was being used by BJP in various parts of Bengal without permission. The song will have to be withdrawn: West Bengal Chief Electoral Officer

* Villagers from Manoharpur in Saharanpur Lok Sabha constituency have decided to boycott polls over 'no development', say, "There are many issues relating to electricity, water and roads. No politician has visited the village to address our issues. We need written assurance else we won't vote."

Villagers from Manoharpur in Saharanpur LS constituency have decided to boycott polls over 'no development', say,"There are many issues relating to electricity,water & roads. No politician has visited the village to address our issues.We need written assurance else we won't vote" pic.twitter.com/VdZpuFcFBo

* BJP's Suresh Nakhua has filed a criminal complaint against Congress' Urmila Matondkar, states, "She has hurt religious sentiments of Hindus by calling 'Hinduism the most violent religion in the world' on a TV show". He also named Congress president Rahul Gandhi and a journalist in the complaint.

* It appears as if this manifesto has been made to gather votes of the separatists of J&K. There is no all India vision in it. It is a manifesto made for vote-bank only: BJP national general secretary Ram Madhav in Jammu Read full report

* Jana Sena candidate from Visakhapatnam Lok Sabha seat, JD Lakshminarayana, releases manifesto on bond paper. He says, "I signed on bond paper which features party manifesto for Visakhapatnam. Voters can drag me to court if I fail to fulfil the promises. Our party has such guts."

Andhra Pradesh: JD Lakshminarayana,Jana Sena candidate from Visakhapatnam LS seat,releases manifesto on bond paper; says."I signed on bond paper which features party manifesto for Visakhapatnam. Voters can drag me to court if I fail to fulfil the promises.Our party has such guts" pic.twitter.com/7D3xxN2JhQ

* I did not take the decision to leave BJP overnight. I've was in the party for 25 years. I saw that this (BJP) govt was a one-man show and two men army, it had turned autocratic, says Shatrughan Sinha after joining Congress

* Andhra Pradesh CM N Chandrababu Naidu speaking at TDP's manifesto release: "Manifestos have become a farce nowadays. Some parties claim that they'll do many things, they don't even know intricacies. But we have a clear vision. We have fulfilled many promises, more than the said ones."

* "When China tried to forcefully enter India's borders and threaten our security in Doklam, the government under the leadership of Modi ji displayed strong will power and our soldiers gave China a befitting reply. For the first time China was forced to retreat," says UP CM Yogi Adityanath in Hojai, Assam.

* Congress member Shatrughan Sinha on being asked if his wife Poonam will contest from Lucknow against HM Rajnath Singh, he said, "Kuch bhi ho sakta hai (Anything can happen)."

* Actually Congress and BJD use the poor for politics. This is the reason a large part of India including Odisha was under immense poverty for so many decades, this situation was then misused by Maoists: PM Modi at Odisha's Sonepur.

* Samajwadi Party leader Dimple Yadav, party chief Akhilesh Yadav's wife, files nomination from Kannauj. "The victory margin will be huge since there is an alliance between SP-BSP. BJP did not fulfil its promises and now to divert attention, BJP is using the security forces. It has been a failed government," says Dimple. Akhilesh Yadav, Ramgopal Yadav, Jaya Bachchan and BSP's SC Mishra present with her.

*  BJP flag is flying proudly in regions where it was unimaginable at one point of time. BJP is the biggest democratic organization in the world. We are now a strong option to Congress and other parties which were formed from within Congress: PM Modi

* People of Odisha have to decide on what kind of government they want - the one focusing on growth and nation or a family-ruled party: PM Modi.

39 years ago on this day, @BJP4India was born with an unwavering commitment to serve society and take the nation to new heights. Thanks to the efforts of our Karyakartas, BJP has become India’s preferred party. Greetings to the BJP family on the Party’s Foundation Day. pic.twitter.com/fBHp3fBQ2a

The @BJP4India stands tall due to it’s democratic ethos and patriotic zeal. This is a Party that is always on the ground, at the forefront of helping fellow Indians. Our development work has endeared the Party to all sections of society, across the length and breadth of India.

I am confident that the entire family of @BJP4India Karyakartas would be working day and night to ensure that our Party and our allies are blessed yet again by the people of India. In the last 5 years lots has been done and we want to do much more for the country.

* "We wanted to release the film on April 5 but some people put us in so many difficulties that we couldn't do it. We are working hard to get the film released on April 11, we have to go to the Supreme Court on Monday,' Vivek Oberoi on his film 'PM Narendra Modi'.

* The Aam Aadmi Party is likely to release its manifesto for the upcoming Lok Sabha polls on April 25. The manifesto, which will list out its agenda for the general elections, will focus on its endeavour to get full statehood for Delhi, a source said. Read more

* BJP national president Amit Shah, who is contesting the polls from Gandhinagar Lok Sabha constituency, will embark on a two-day roadshow covering areas in western Ahmedabad.

* BSP supremo Mayawati to campaign in Uttarakhand's Roorkee and Rudrapur.