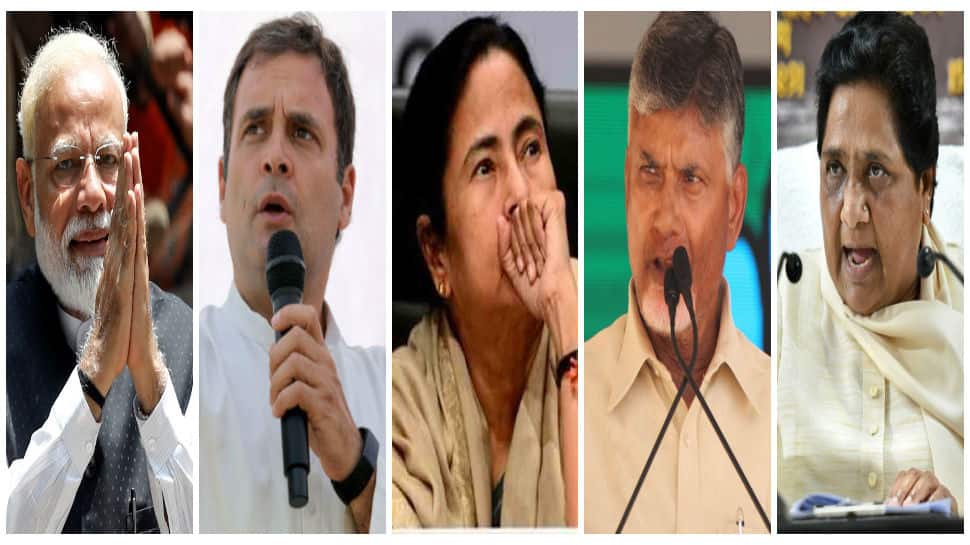 It promises to be a thriller of a Thursday in India when Election Commission sits down to count crores of votes cast in Lok Sabha election 2019 - the largest democratic exercise in the world – spanning the length and breadth of the country over more than 40 days. Seven phases, 542 constituencies, thousands of candidates and crores of eligible voters have defined Lok Sabha election 2019 over the last several weeks. Promises have been lofty, allegations have been scathing and not a single stone has been left unturned by political parties in their respective bids to either remain in power or seize it. Lok Sabha election 2019 has been a potboiler with ample doses of action, drama and even comic relief which now promises to end in an electrifying climax.

Of predictions and prayers

After voting in seven phases which concluded last Sunday (May 19), a majority of exit polls released predicted a comfortable win for the National Democratic Alliance (NDA) with the Bharatiya Janata Party (BJP) possibly hitting the majority mark on its own. Zee News’ poll of polls - Maha Poll – showed that the NDA could once again hit a triple century and form the government on the back of wins in 303 seats. It has also predicted that the Congress-led United Progressive Alliance may be halted to 117 seats, quite unable to mount any challenge. The other parties are predicted to finish with a combined tally of 122 seats.

The reason behind NDA’s predicted power push once again could well be the forecast that the party could do well in states like West Bengal and Karnataka, apart from completely dominating states like Rajasthan, Madhya Pradesh and Chhattisgarh where the saffron party has always batted on the front foot. The party has also been predicted to do reasonably well in Uttar Pradesh despite the coming together of Samajwadi Party and Bahujan Samaj Party here. In the last Lok Sabha election, BJP had nearly swept the state with 71 of 80 seats.

Little wonder then that most opposition parties are now on prayer even as they have been busy dismissing exit poll numbers as either gossip, guesswork or guile

Of accusations and allegations

The entire Lok Sabha election 2019 campaign was marred by tons and tons of accusations and allegations levelled by political parties at one another and by some political parties at the Election Commission. The most recent of these doing the round is one that firmly puts Electronic Voting Machines (EVMs) in cross hairs. A number of opposition parties have renewed their charge that the EVMs continue to be vulnerable to intentional manipulations, urging EC to take corrective measures like counting voter-verified paper audit trail (VVPAT). While there is nothing new about this demand, opposition parties resurrected the demand and met EC officials shortly after most exit polls predicted them to come to a cropper in this election. As many as 21 leaders from opposition parties met EC regarding this on Tuesday, just two days before the counting of votes.

Among the several leaders who have denied the forecast of exit polls or cast aspersions on the EC are Chandrababu Naidu and Mamata Banerjee. While the Telugu Desam Party chief has demanded that VVPAT slips be counted and tallied with actual votes, the TMC supremo has been outrightly brazen throughout the course of this election.

Of shooting from the mouth and being muted

The entire duration of Lok Sabha election 2019 saw leaders cutting across party lines make controversial remarks ranging from personal attacks, derogatory jabs and blatant claims. Some even tried to play the cards of caste, community and religion in their respective bids to sway the minds of voters. And all of this despite EC enforcing the Model Code of Conduct (MCC).

So, while leaders like Azam Khan – up against former SP colleague Jaya Prada in Rampur – made sexist remarks, others like BSP chief Mayawati, Congress’ Punjab minister Navjot Singh Sidhu and Uttar Pradesh Chief Minister Yogi Adityanath appealed to voters to keep religious and/or social considerations in mind when voting. And then there was Sadhvi Pragya – BJP candidate from Bhopal - who made a number of controversial remarks including that of being proud to have been in Ayodhya when the Babri Masjid was demolished. Each one of these political leaders was banned from campaigning for varying time periods by the EC for violating the MCC.

Of Bengal burning at the altar of democracy

West Bengal, single-handedly, grabbed the spotlight this election with rampant violence in each of the seven phases of voting here. With BJP ramping up its efforts in the state after opening its account here in the last Lok Sabha election, TMC appeared rather nervy. The possibly-flayed nerves exploded by the time voting began with TMC and BJP cadre clashing repeatedly. Both parties accused each other of trying to influence or coerce voters, of fanning unrest and instigating violence and of generally undermining democracy.

Mamata, accused of creating roadblocks in BJP leaders’ campaign schedule in West Bengal, led a fierce fight which often degenerated into crassness. At different points in the election campaign, she referred to BJP as a party of goons and authoritarians. She even launched repeated personal salvos against Modi, remarking on how she wants to send sweets of mud and with pebbles to him, and give him a slap of democracy. The belligerent West Bengal CM made matters even worse when she questioned the EC and said it was working on BJP’s direction and that its officials were members of Rashtriya Swayamsevak Sangh (RSS).

Several political analysts believe that Mamata has harboured ambitions of becoming the PM and this – coupled with BJP’s forays into West Bengal – could have made her try to grab as many headlines as possible and for as many reasons as she could. Other opposition leaders tried to keep up.

Of Modi vs Opposition

Lok Sabha election 2019 may well be remembered as a fight to defeat one man rather than to win an election.

Several opposition parties – led by the Congress – attempted to combine forces and form pre-poll alliances with the supposed objective of removing Modi as Prime Minister of the country. Accusing him of having betrayed promises made in 2014 and charging him for almost every problem in the country, these parties dabbled with the possibility of a political knitwork against Modi in the election. It was not meant to be as several regional parties opted to remain out of the UPA fold while still spewing the venom against the PM.

The task of spewing venom was primarily led by Rahul Gandhi who singled out the Rafale deal with France’s Dassault Aviation to term Modi as a thief. The Congress president, with aspirations of being the PM, tried to make the ‘Chowkidaar Chor Hai’ campaign viral but ended up apologising twice to the Supreme Court for having misinterpreted it in relation to the Rafale case in the apex court. The government, meanwhile, provided Modi with a shield and the defensive wall hardly ever appeared to crack despite repeated onslaughts.

Modi himself looked steadfast as ever and banked on his oratory skills yet again to reach out to the people of the country. Addressing hundreds of rallies in the country, Modi spearheaded the BJP campaign yet again with party chief Amit Shah’s electoral acumen at his disposal at all times.

If the BJP-led NDA manages to prove exit polls correct on Thursday, it could be a massive stamp of approval for Modi who has laid out a roadmap for governance in the next five years. If the numbers are proven wrong, there could be a massive tussle among opposition parties who have largely disagreed on who could be their PM candidate. Either way, India’s future beckons as the world waits with bated breath. Counting of votes start 8am on Thursday with a possible confirmed result by evening.

Lok Sabha election 2019: Will Modi remain invincible or can Akhilesh-Mayawati dent the BJP in Uttar Pradesh?