PM Narendra Modi said, "The opposition speaks the language of terror groups and even supported another neighbour when India was working hard to protect its territory" 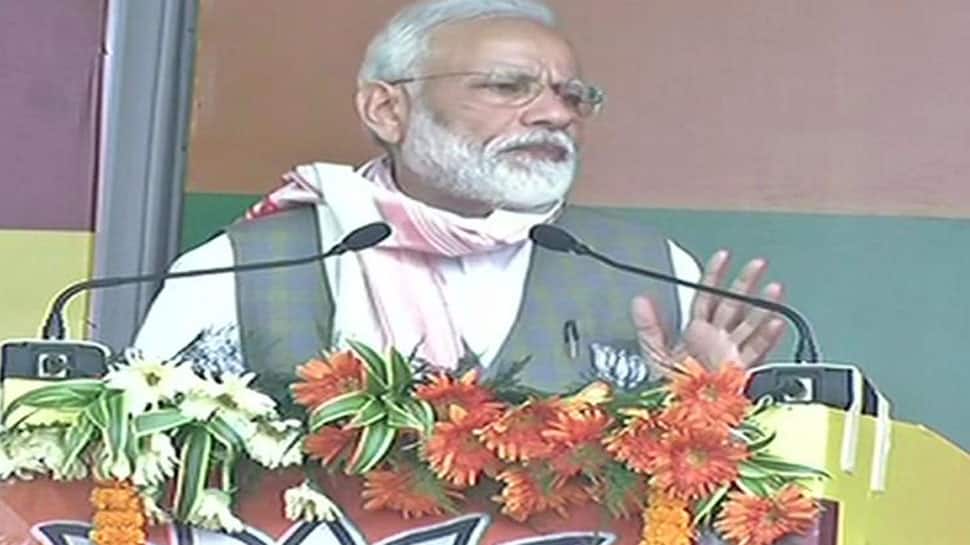 Aalo: Prime Minister Narendra Modi on Saturday asked the people of Arunachal Pradesh to vote for a 'chowkidar' (watchman) who would provide security to the country even as he attacked Opposition parties, claiming they were "disheartened" by India's growth and success.

Kicking off his campaign here for simultaneous Lok Sabha and Assembly polls in Arunachal Pradesh, the prime minister said the state is a "shield for the country with the people zealously guarding the border as sentinels".

Targeting the Congress, he said the grand old party is "synonymous with corruption" and has the habit of taking people of this country for a ride".

"When the country makes significant achievements, don't you feel happy? Everyone, irrespective of their social and financial status, regales at India's success stories. There are, however, some who feel disheartened by India's growth and success," PM Modi said.

"When India hit terrorists in their houses, what was the stand of opposition parties you have all seen. Even when our scientists made achievements, they found excuses to belittle them," he said, urging the people to "punish" opposition parties in the upcoming elections.

"The opposition speaks the language of terror groups and even supported another neighbour when India was working hard to protect its territory," the prime minister said, indirectly referring to China.

He thanked the Arunachalees for voting the double-engine BJP government to power at the Centre and the state.

"In the northeast, the lotus first bloomed in Arunachal. It is because of your support, the Centre has been able to bring about development in the state," Modi said.

Listing his government's achievements, the prime minister said the Centre has provided power connection to 50,000 families, gas connection to 40,000 mothers and sisters and built toilets for over 1 lakh families in the last five years.

"Our government has honoured your hopes, aspirations. This watchman was given the opportunity to bring Arunachal on the country's railway map after seven decades of Independence.

"Air connectivity projects have also gained momentum in the state under the NDA rule, with the construction of several Advance Landing Grounds (ALGs) and airports. The deck for the ambitious Greenfield Airport project has been cleared," he said.

The NDA, after coming to power, has attached priority to the northeast by pumping in huge funds for undertaking infrastructure and other development projects, he stated, adding the region will become the growth engine for the nation, in tune with the Act East Policy.

"People often laughed at me when I wore tribal hats and other traditional attire during my visits to the northeast. For them, these are tribal outfits, but for me these dresses signify the rich culture and traditions of the northeast states," he claimed.

"In the last five years, I visited the region for a record 30 times, something that no other prime minister has done in the past. Every month, several central ministers visited the northeast states to understand the problems and challenges of the people," Modi said.

The prime minister also alleged that modern infrastructure was a "distant dream" for the people of Arunachal Pradesh for 55 years under the "dynastic rule" of the Congress.

Claiming that the BJP's flag would fly high again in the region and New Delhi, he lauded the people of the state for their contribution in electing the BJP to power.

"Arunachal is lucky for the BJP. The process for the lotus to bloom again in the northeast has already begun with three party candidates from the state getting elected unopposed - from Aalo East, Yachuli and Dirang Assembly constituencies," Modi said.

Congratulating the people for reposing faith in him and his party, he said, "Our government has provided drinking water facilities, set up the first Sainik school and tribal research institute to promote the heritage and talents of the tribal state. It has also provided collateral-free loans of Rs 100 crore under Mudra Yojana for youths."

Referring to the Arun Prabha channel, the 24th Doordarshan satellite channel launched recently, the prime minister said it will ensure that people across the country get to learn about Arunachal Pradesh, its people, culture, ethos and festivals.

"Arunachal, which is set to hold Mopin festival soon, will be able to showcase its festival and traditions through this recently launched Arun Prabha channel," he added.

Election to the Lok Sabha and the Assembly in the state will be held on April 11.