A crucial meeting of BJP and RSS leaders has begun at the Maharashtra Sadan in Delhi to discuss the political deadlock in Maharashtra. BJP working president JP Nadda, Bhupendra Yadav and BL Santosh are among those attending the meeting. 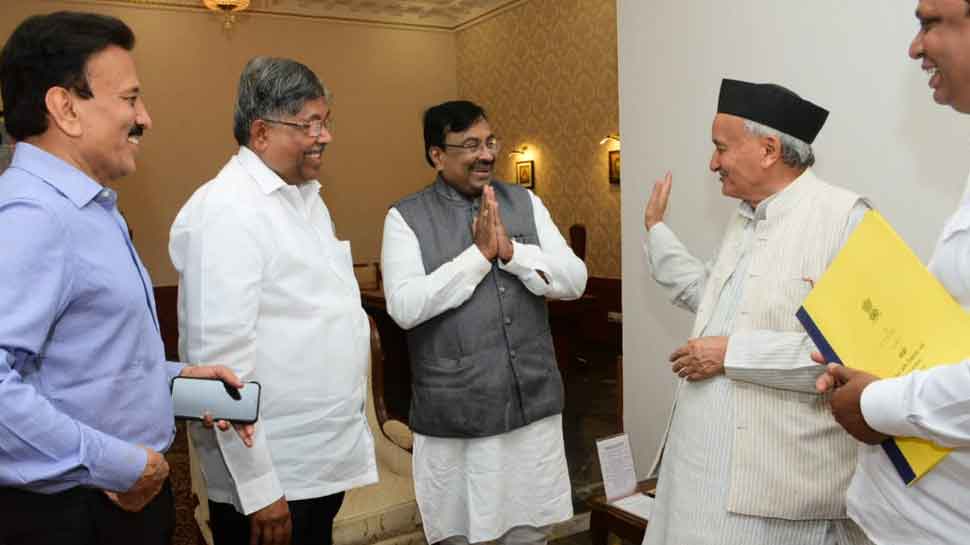 MUMBAI: A BJP delegation led by party's state unit president Chandrakant Patil and Sudhir Mungantiwar on Thursday met Maharashtra Governor Bhagat Singh Koshyari and discussed the delay in government formation in the state. Talking to reporters after emerging out of the meeting, Patil said, ''We met with the Governor and discussed the legal options of delay in government formation.''

''Now, we will decide our future course of action,'' he added.

Meanwhile, a crucial meeting of BJP and RSS leaders has begun at the Maharashtra Sadan in Delhi to discuss the political deadlock in Maharashtra. BJP working president JP Nadda, Bhupendra Yadav and BL Santosh are among those attending the meeting.

Earlier, the newly-elected Shiv Sena legislators said on Thursday that their party president Uddhav Thackeray will take a final call on government formation in Maharashtra in order to end the ongoing political deadlock in the state.

During the meeting, which was held at Sena chief's residence Matoshree, the party legislators also asked Uddhav to be firm on the demand for a rotational CM during negotiations with ally BJP. Sena MLAs said with one voice that the doors of their party are now closed for incumbent chief minister Devendra Fadnavis.

The meeting went on for an hour at Matoshree in Mumbai.

Shiv Sena MLA Abdul Sattar told reporters that all the party MLAs and 8 independent legislators will remain at Rang Sharda Hotel in Bandra till the government is formed in the state. He aded that the party has unanimously decided that only Shiv Sena leader be made the chief minister.

Shiv Sena leader Sanjay Raut had denied rumours of party MLAs being moved to resorts to thwart alleged poaching by ally BJP, saying that his party remained intact and their political adversaries were spreading false rumours.

Raut also denied that the Sena wants BJP leader and Union minister Nitin Gadkari to be the chief minister instead of Devendra Fadnavis.

Gadkari himself denied being in running for the CM post and backed Fadnavis for the top job.

The Union minister said there was “no question” of him returning to state politics and expressed confidence that the Sena and BJP will reach a deal soon.