Though Baba Ramdev has attacked veteran politician Lalu Prasad Yadav several times in past, the RJD chief appears to have become an ardent fan of the renowned yoga guru. 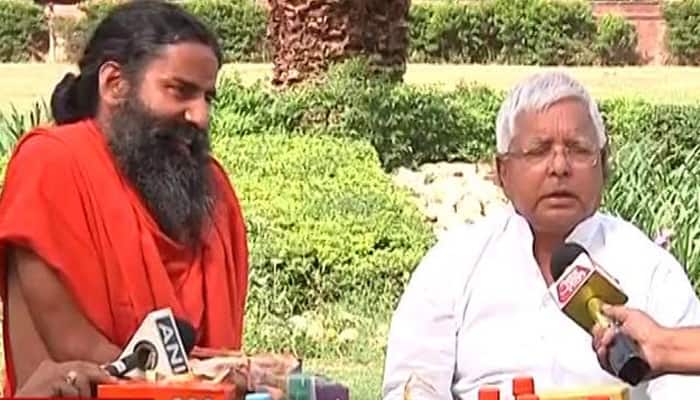 Delhi: Though Baba Ramdev has attacked veteran politician Lalu Prasad Yadav several times in past, the RJD chief appears to have become an ardent fan of the renowned yoga guru.

The former chief minister of Bihar, who met Baba Ramdev in the national capital on Wednesday, said, ''People are jealous of Baba Ramdev because he is highly successful.''

Praising the yoga guru, Lalu said, ''His products are in demand and he is doing good for the country.”

The veteran Bihar leader, in a joint press conference with yoga guru, said that whatever Ramdev earns, he spends it on charity.

Defending Baba Ramdev over various allegations of accumulating huge wealth through illegal means, Lalu said, ''he has earned everything through sheer hard work.''

It was a conspiracy by his rivals to defame him, his products, the RJD chief said.

When quizzed by reporters whether he will promote Baba Ramdev's products, Lalu jokingly said, ''I am a permanent brand ambassador of his products.''

On his turn, the yoga guru said he had come to invite Lalu Yadav to attend International Yoga Day celebrations.

He also gifted Lalu Yadav several products of his Patanjali Ayurved. The yoga guru also tweeted a picture of his meeting with the RJD chief.

The RJD chief's new found love for Baba Ramdev comes despite being attacked by the yoga guru, who once said Lalu is a direct descendent of 'Kans'' and not 'Lord Krishna'.