At least 717 people, including four Indians, were killed and over 860 injured in a stampede on Thursday during Haj here, in the second worst ever tragedy to hit the annual pilgrimage in Saudi Arabia. 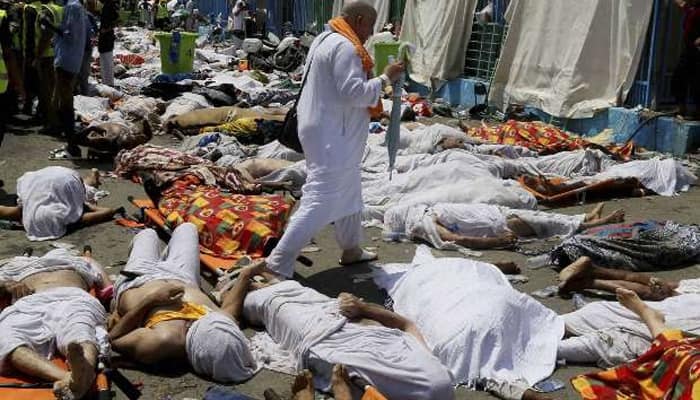 Mina: At least 717 people, including four Indians, were killed and over 860 injured in a stampede on Thursday during Haj here, in the second worst ever tragedy to hit the annual pilgrimage in Saudi Arabia.

The four Indians killed in the tragedy during the symbolic stoning of the devil, included a woman and a volunteer, Indian Consulate officials in Jeddah said. Two Indians were also injured.

The Saudi civil defence authority said 717 pilgrims from different nationalities were killed and 863 others were injured in the stampede that took place due to a sudden surge in the number of pilgrims heading to Jamarat for symbolic stoning of the devil by throwing pebbles against three stone walls resulted in the stampede at 9 AM local time (1130 IST).

The state-run Saudi Press Agency said the stampede occurred at the intersection of two streets leading to Jamarat, about five kilometres from Makkah.

The deceased had gone for the Haj through a privately- sponsored group, he said. A woman from the state was among those injured, he added.

A woman pilgrim from Hyderabad identified as Bibi Jaan was also killed in the stampede, said S A Shukoor, special officer of Telangana State Haj Committee.

Jaan had gone on the pilgrimage with her husband and two other relatives on September 2. She was caught up in the stampede and died at a hospital in Mina, he said.

Two Indians from Assam were among the injured and have been admitted to hospital.

This is the second worst tragedy to hit the Haj after 1990 when 1,426 pilgrims were killed in a stampede inside a tunnel leading to holy sites.

Indian Haj mission doctors were deployed in all government hospitals in Mina and Mecca.

India will respond if Nawaz Sharif mentions Kashmir at UN