As Andhra Pradesh continues to reel under heatwave, Chief Minister Chandrababu Naidu on Saturday announced a compensation of Rs 1 lakh each to the kin of those who have died of sun-stroke. 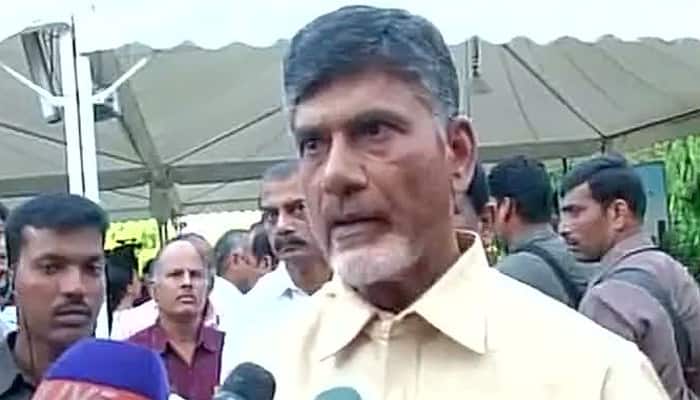 Hyderabad: As Andhra Pradesh continues to reel under heatwave, Chief Minister Chandrababu Naidu on Saturday announced a compensation of Rs 1 lakh each to the kin of those who have died of sun-stroke.

“We are announcing Rs 1 lakh as compensation for each victim of heat wave,” ANI quoted Naidu as saying.

He further said, "The toll so far due to heat wave in Andhra Pradesh may be over 100."

However, officials have so far confirmed that the heatwave has claimed at least 223 lives.

While 128 persons have died in Telangana, the toll increased to 95 in Andhra Pradesh, where 15 more persons succumbed to the heatwave, senior officials said.

Earlier in the day, severe heat wave conditions have been reported in both Andhra Pradesh and Telangana.

According to officials, 40 persons lost their lives in Prakasam district of Andhra Pradesh followed by Visakhapatnam 12 and Srikakulam eight while in Telangana, 28 persons died due to heat wave in Nalgonda district followed by 22 deaths in Karimnagar and nine in Khammam district.

Elderly people, daily wage labourers, beggars and people living on footpaths have been the worst hit.

The Hyderabad Meteorological Centre has warned that severe heat wave conditions may continue for three more days in both the states.

Khammam in Telangana today sizzled at 48 degrees Celsius, the highest temperature in the state this season. This also broke a 68-year-old record in Khammam when the town had recorded 47.2 degree Celsius in 1947.

The south coastal Andhra region bore the brunt with many places recording three to five degrees higher temperature than normal. A maximum temperature of 47 degrees was recorded at Nandigama and Vijayawada.

The heatwave, attributed to dry winds blowing from the north, has badly hit normal life in both the states. Streets in many towns wore a deserted look as people preferred to stay indoors to escape the sun's fury. Traffic was thin on the roads of Hyderabad during day time.

Heatwave conditions, Thursday, prevailed over some parts in the districts of Krishna, Guntur, Prakasam and Nellore of Coastal Andhra Pradesh and Chittoor of Rayalaseema.

The maximum temperature of 46 degrees Celsius was recorded at Nandigama, they said, adding heat wave conditions would continue till tomorrow.

Meanwhile, Delhi recorded its hottest day of this summer at 44.5 degrees Celsius, five notches above the normal. However, the weatherman hinted at the likelihood of some relief in the form of dust storms or thunderstorms tomorrow across northern India.

The heatwave also intensified in Odisha as the mercury inched above the 40-degree mark at 19 places in the state while three more deaths due to the sweltering conditions were reported today, taking the toll to 26, said the office of the special relief commissioner.

Titlagarh recorded the highest maximum in the state at 46.2 degrees while Jharsuguda and Bhawanipatna recorded highs of 46 degrees. The Odisha state capital of Bhubaneswar sizzled at 42.7 degrees.

Back in the northern plains, Uttar Pradesh saw the mercury cross the 41 degree mark in most of the districts. Allahabad recorded the highest maximum in the state at 47 degrees, which was five notches above the normal, followed by Banda at 46.6 degrees, Varanasi (45.8 degrees) and Sultanpur (45.6 degrees).

UP capital Lucknow saw the maximum touch 44.4 degrees even as weather officials forecast rain/thundershowers at isolated places along with dust storms and thunderstorms accompanied by squalls tomorrow at other areas of the state.

The two neighbouring states of Punjab and Haryana, too, reeled under the heatwave.

Bhiwani in Haryana witnessed a high of 45.2 degrees, four notches higher than the normal, while Hisar saw the maximum go up to 44.7 degrees.

The Union Territory of Chandigarh, which was hit by a dust storm this evening, recorded the season's hottest day so far at 43.4 degrees.

In Punjab, Amritsar saw the mercury settle five notches above the normal at 43.6 degrees while Ludhiana sweat it out at 43.5 degrees.

The MeT office has forecast dust storm/thunderstorm accompanied with squalls at wind speeds exceeding 45-kmph at isolated places in Haryana and Punjab over the next two days.

The desert state of Rajasthan saw Jaisalmer recording the highest maximum at 46.5 degrees followed by Kota with a high of 45.4 degrees as heat wave conditions prevailed at a few places in the Kota and Bikaner divisions and in isolated areas of Jodhpur division.

The heat wave conditions are likely to continue in isolated pockets of Rajasthan even as a thunderstorm is likely at some places in the state in the next 24 hours, the MeT office said.

There was slight respite from the heatwave in the Vidarbha region of Maharashtra as the temperatures dropped in several areas even though Chandrapur recorded a high of 47 degrees. Chandrapur had yesterday recorded a maximum of 47.6 degrees.

Nagpur, which had recorded a high of 47 degrees for two consecutive days earlier this week, today saw the mercury settle at 45.1 degrees.