A 32-year-old Hindu craftsman in Vadodara has adopted a unique way to spread the message of communal harmony! 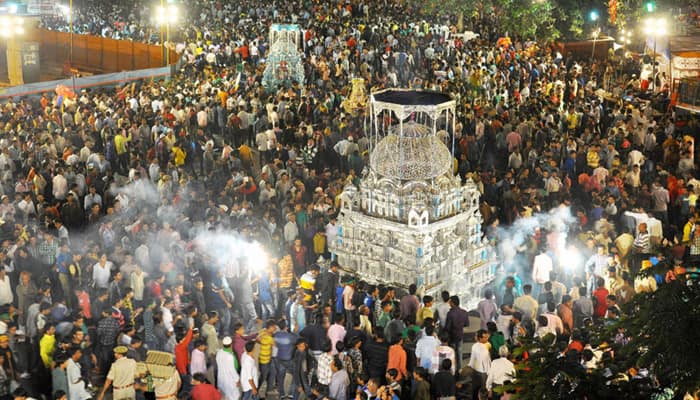 Vadodara: A 32-year-old Hindu craftsman in Vadodara has adopted a unique way to spread the message of communal harmony!

Departing from his family tradition of making temple banners and flags, this Hindu artist has made colourful and artistic Tazias for Muharram.

Among the Tazias taken out by Muslim devouts in Vadodara on Wednesday, Vipul Kansara's creation too stood out with the decorative use of more than 150 kgs of German silver, metal brass and aluminium for the 12-feet Tazia.

"The Tazia was made after I received an order from Phiirozkhan Akbarkhan Pathan, President of Muharram Committee from Muslim-dominated Bhalej town in neighbouring Anand district. It took me 45 days to complete and deliver it to them on the eve of Muharram," Vipul Kansara told media.

It has four minars (tombs) besides quotes from Quran in Arabic and Urdu scripted all over it, he said.

A Tazia is a replica of the tomb of Imam Hussain, the martyred grandson of Prophet Muhammad, that is taken out by Muslim devotees in processions during Muharram. The first ten days of the month of Muharram commemorate the martyrdom of Imam Hussain and his companions in the Battle of Karbala.

Muharram committee impressed by his work

"The Muharram committee team from Bhalej was impressed with my artwork of making Tazias using these metals at Padra town here last year. So they asked me to make another for them this year too. I enjoyed making it because I am an artist and my work has nothing to do with any religion," Kansara felt.

Kansara is from the third generation of his family, which has been engaged in the business of making "Dhajas" (flags) for famous temples of Ambaji, Shamlaji, and Swaminarayan at Vadtal and other places all over the country.

However, he took to making Tazias for the Muslim community two years ago.

Pathan said that despite being a very costly affair, the committee decided to go for making a Tazia using metals because it is of a permanent nature and can be used every year during Muharram.

"Customary Tazias made of paper, thermocol and bamboo are of temporary nature and are buried every year. We wanted something that would last long," he said.

Pathan said we will not bury it but instead cover and preserve it with white clothing after the procession is over.

Kansara believes that through their work, Tazia makers like him are sending out a message of brotherhood and harmony between Hindus and Muslims.

The joint participation of people in important events of different communities is an example of inter-faith harmony that exists in the country, he said.

Also, Kansara was felicitated at a ceremony in Bhalej yesterday for his wonderful creation.