Many may be accusing the Jawaharlal Nehru University students Kanhaiya Kumar, Umar Khalid and some others for inciting anti-national sentiments, but it seems that some professors of the prestigious university are the real culprits, who are infusing hatred for the country amongst the youngsters. 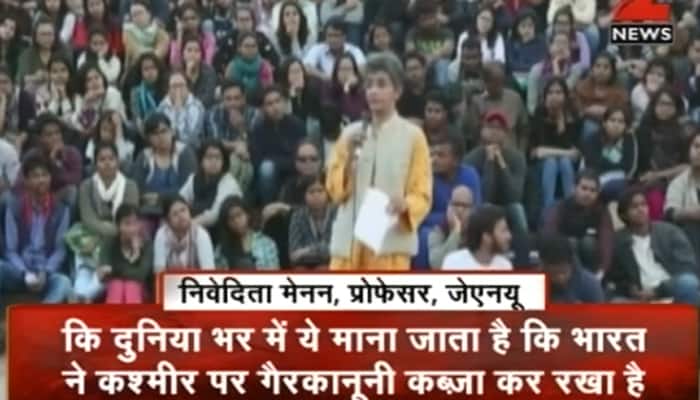 New Delhi: Many may be accusing the Jawaharlal Nehru University students Kanhaiya Kumar, Umar Khalid and some others for inciting anti-national sentiments, but it seems that some professors of the prestigious university are the real culprits, who are infusing hatred for the country amongst the youngsters.

Addressing a gathering of students on nationalism programme, JNU professor Nivedita Menon, who teaches at the Centre for Comparative Politics and Political Theory at the International Studies school, said, “We believe that democracy (Rashtraraj) is a very strong thing, but if it was so strong then why few students, who raised such (anti-India) slogans were arrested.” She went on to say that, “If such incidents happen then the democracy is not so strong as we claim because tanks and guns are used to keep the democracy intact and strong.”

The professor in question also made some remarks on Kashmir, which might encourage Pakistan and China in their anti-India propaganda.

''After Independence, the accession of Kashmir was done following the India-Pakistan war on the pretext that a plebiscite will be conducted when the situation gets back to normal and since then it (janmat sangrah) has not happened,'' she said in her speech.

“We all know that the world today believes that India is illegally occupying Kashmir,” she added.

Further spitting venom against the state, she said, “India is an imperialist country. Here 30-40 percent of the country is under control of the army in the name of special forces laws, which are used to crush the people.''

“Atrocities are being committed from Kashmir to the northeast and in Chhattisgarh,” Menon noted, adding that “Manipur and Kashmir have been illegally occupied by the Indian state.''

The JNU professor was of the view that raising pro-azadi slogans in context of Kashmir is justified.

Further justifying her statement, Menon said, “When the international community is debating over legal occupation of Kashmir, then we should think that 'azadi' slogan is justified.''

She also said that Nagaland was annexed by India.

Menon was not the only one who shared such anti-national views. Retired Delhi University professor Achin Vinayak shared echoed similar views on Kashmir and the northeast.

Mithun On Mamata Banerjee: Mithun Chakraborty's big statement on Mamta, 'I am a big follower of Mamta'

Shraddha Murder Case: Metal found in the jaw recovered from the forest, Dentist from Mumbai gave a big testimony