Like Manmohan, PM Modi too suffering from 'maunibaba syndrome': TMC

Opposition Trinamool Congress today took a dig at Prime Minister Narendra Modi claiming he was suffering from the "silence syndrome" that had hit his predecessor Manmohan Singh and was facing the problem of "two power centres", one of them being in Nagpur. 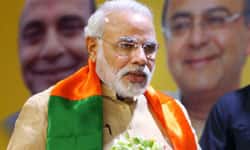 New Delhi: Opposition Trinamool Congress today took a dig at Prime Minister Narendra Modi claiming he was suffering from the "silence syndrome" that had hit his predecessor Manmohan Singh and was facing the problem of "two power centres", one of them being in Nagpur.

Resuming discussion on the Motion of Thanks to the President for his address, Sultan Ahmed (TMC) appealed to the Prime Minister to take everyone including the minorities and the Dalits along, reminding Modi that the nationalism propagated by Subhash Chandra Bose was "inclusive".

Ahmed, whose speech saw occasional protests from the treasury benches, said Modi had come to power raising lot of expectations but his government has been afflicted with "policy paralysis" within two years, noting that the charge used to be levelled by BJP against the Manmohan Singh regime.

He said it was strange that Modi did not speak a single word on the unprecedented violence and arson in Haryana in the wake of the Jat stir inspite of the fact that the troubled state was just 30 km away from the national capital.

Ahmed said the Prime Minister boasted of a 56-inch chest, but kept quiet on the Jat youth unrest that has resulted in damage to property worth Rs 34,000 crore. Same was his attitude when the Patidar agitation struck Gujarat, he added.

"Manmohan Singh's weakness of keeping mum has now hit Modi", he claimed adding that the Prime Minister has hardly any time between his frequent foreign tours.

He said since the Prime Minister kept silent, Home Minister Rajnath Singh had to step out to hold consultations on the Haryana stir, a charge stoutly denied by the Home Minister who was present in the House.

Attacking the government for not fulfilling the promise of providing jobs to the youth, he said the unrest among the youth was growing day by day for want of employment, but hardly anything was being done. The Ministry of Skill Development which is expected to make youths learn more skills is just a "fraud," he alleged.

Urging the Prime Minister to look after the minorities and the Dalits too, he said Modi, like Manmohan Singh, faces the problem of two power centres.

Modi was one power centre while the other was the RSS in Nagpur which tells others in BJP how much leeway can be granted to the Prime Minister, the TMC member claimed.