Doddering and frail but nevertheless beaming with pride, 103-year-old former enclave dweller Mohammed Ajgar Ali cast his maiden vote in the sixth and final phase of the West Bengal elections on Thursday. 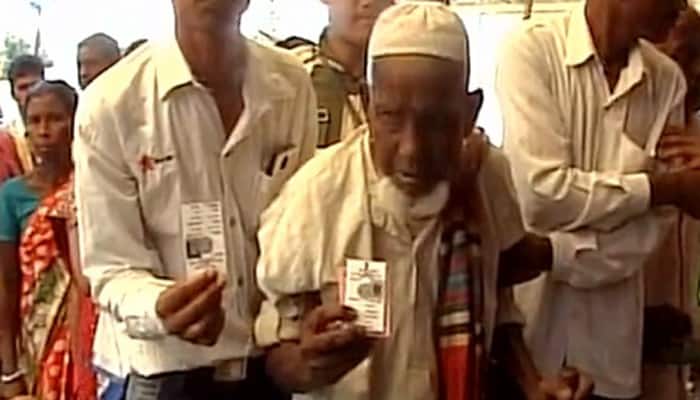 Dinhata: Doddering and frail but nevertheless beaming with pride, 103-year-old former enclave dweller Mohammed Ajgar Ali cast his maiden vote in the sixth and final phase of the West Bengal elections on Thursday.

Ali is one of the 9,776 newly registered electors from the erstwhile enclaves in Cooch Behar district.

Accompanied by his son, grandson and other family members, Ali was brought in a special vehicle provided by the Election Commission which literally rolled out the red carpet for these voters.

Ali is from Madhya and Uttar Mashaldanga (now in Dinhata assembly seat), a former Bangladeshi enclave that became part of India on August 1, 2015 following the implementation of the historic Land Boundary Agreement in which Bangladesh and India exchanged 162 adversely-held enclaves.

"I feel proud that I am voting with my grandfather and father. We have been waiting in anticipation for a long time for this day," Joynal Abedin, Ali's grandson, told mediapersons.

Leaning heavily on his walking stick, Ali slowly made his way to the booth and was helped by a designated official to operate the Electronic Voting Machine (EVM). A look of consternation passed over Ali's crinkled visage while he went through with the unfamiliar process.

As he sat down on the floor momentarily, tense eyes darted to the centenarian. However, aided by officials he was up on his feet and flashed a victory symbol accentuated with a toothless smile.

"It took us a lot of time to enable them to learn about how things work but it is proving to be a success," Rani told IANS.

Altogether 9,776 erstwhile enclave dwellers, including 567 who have opted for India from the former Indian enclaves -- now part of Bangladesh -- are registered as electors.