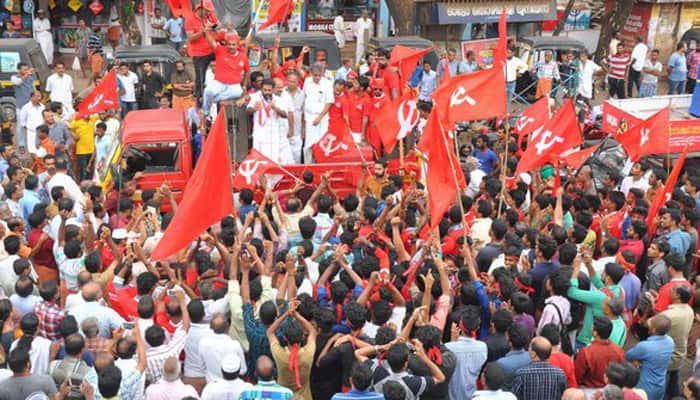 Thiruvananthapuram: The Left Democratic Front on Thursday returned to power in Kerala by defeating governing United Democratic Front with a huge margin whereas the BJP managed to open its account in the state.

The CPI(M) will now declare the new chief minister of the state on Friday.

Election officials said the LDF had won 91 seats, with the CPI-M itself grabbing 58. In contrast, the entire UDF tally was 47, a clear sign of the voters' disgust against a government that battled corruption charges.

"This is a vote against the corrupt and those who failed to protect the dignity of women," thundered CPI-M veteran and former chief minister V.S. Achuthanandan.

He called it a "wave" in favour of the LDF, whose victory will now make Kerala the second state in the country after Tripura to come under Marxist control.

"We accept this defeat which we never ever expected," said a stunned Ooomen Chandy, the outgoing chief minister. "We felt we would return (to power) but this has not happened. We will now introspect."

It was one of the worst electoral defeats for the UDF. The Congress seat tally fell from 39 to 22.

"As chairman of the UDF, I have a responsibility for this debacle," said Chandy, who however was elected for the 11th time from Puthupally.

As boisterous Left activists celebrated all across Kerala, CPI-M leaders said the party would meet on Friday to decide who will be the new chief minister.

In the race are two men: Achuthanandan, 92, and his long-time foe within the party, Pinarayi Vijayan, 72.

Although Vijayan is known to enjoy majority support within the CPI-M in Kerala, Achuthanandan is widely seen as the mass leader and he is known to be keen to lead the state again.

Besides the CPI-M's 58 seats, the Communist Party of India (CPI) won 19 seats, the Janata Dal-Secular three, the Nationalist Congress Party (NCP) two while four other LDF constituents won one seat each.

Five independents backed by the Left were also elected.

The UDF suffered a huge setback in districts like Kollam and Thrissur besides Ernakulam and Thiruvananthapuram.

Rajagopal, a well-known face in Kerala politics, becomes the first BJP leader to enter the Kerala assembly. Until Thursday, no BJP candidate had won an assembly or Lok Sabha election in the state.

A visibly happy Rajagopal said his victory would mark the BJP's surge in Kerala.

But the BJP's hopes of getting four to six legislators elected on the strength of some aggressive campaigning by Prime Minister Narendra Modi as well as BJP president Amit Shah failed.

Independent candidate P.C. George was also elected to the house.

A total of 1,203 contestants were in the fray. Most exit polls had predicted a Left victory. But Congress leaders, Chandy included, insisted until the votes were counted that the UDF would return to power.

Finally, the Kerala voter proved that he likes to change the government every five years.