Five things to know about the G20 summit in Hangzhou

The Group of 20 summit opens Sunday in the scenic city of Hangzhou, providing China`s image-sensitive rulers an opportunity to showcase the country`s emergence as a global powerhouse. 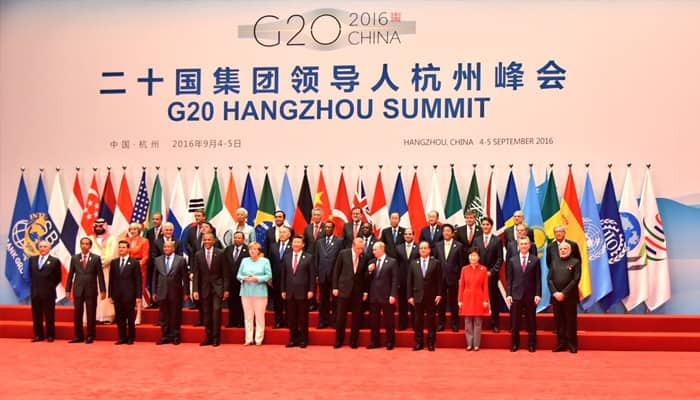 Hangzhou: The Group of 20 summit opens Sunday in the scenic city of Hangzhou, providing China`s image-sensitive rulers an opportunity to showcase the country`s emergence as a global powerhouse.

The government has spruced up the city, best known for its island-dotted West Lake, shut down thousands of factories to ensure telegenic blue skies, and rolled out restrictive security precautions.

But although the leaders meet in a climate of economic uncertainty and sluggish global growth, the absence of an urgent crisis means the forum will be short on breakthroughs, analysts say.

As heads of state from around the world gather, here are five things to know:

The Group of 20 (G20) comprises 19 of the world`s largest economies and the European Union, representing 85 percent of world GDP and two-thirds of its population.

The annual summit is primarily about financial and economic policy, but it is also an opportunity for a disparate group of leaders to hobnob and tackle pressing issues of the day, from geopolitical crises to climate change.

The G20 was born in 1999 after the shock of the Asian financial crisis showed the need to improve global economic coordination.

The Group of 7, the exclusive club for the world`s most developed countries, did not include powerhouses such as China, India and Brazil that were playing an increasingly critical role.

At first it hosted fairly technical meetings among ministers. But after the 2008 financial crisis it was upgraded to leadership level in the hope of staving off the collapse of the global financial system.

That depends on who you ask. Some experts say it is an important venue for coordinating economic policy. Others think it is little more than a gab fest.

What can be said for sure is the meetings have produced a long list of promises. At last year`s gathering in Turkey, for example, leaders made 113 commitments on issues ranging from cutting subsidies for fossil fuels to increasing aid to refugees.

But the forum`s failure to deliver on past pledges has raised questions about the credibility of future promises.

Compliance with 13 priority commitments made in 2015 stands at 77 percent, according to an analysis by the University of Toronto.

Observers say this year, in particular, is unlikely to produce any serious results. Without an acute crisis to galvanise change, rising anti-globalisation sentiment makes it difficult for many leaders to make any meaningful commitments.

Since the world turned to China to help power it out of the 2008 financial crisis, Beijing has increasingly felt it deserves a more prominent role befitting its status as the world`s second-largest economy.

The G20 is the largest, most prestigious summit that China has ever held.

It might not be a coronation ceremony, but President Xi Jinping intends to show the world -- and political rivals at home -- that China is a powerful, capable nation ready to take up its role in guiding the world economy.