U.S. Secretary of State John Kerry demanded on Wednesday that Russia and the Syrian government immediately halt flights over Syrian battle zones, in what he called a last chance to salvage a collapsing ceasefire and find a way "out of the carnage". 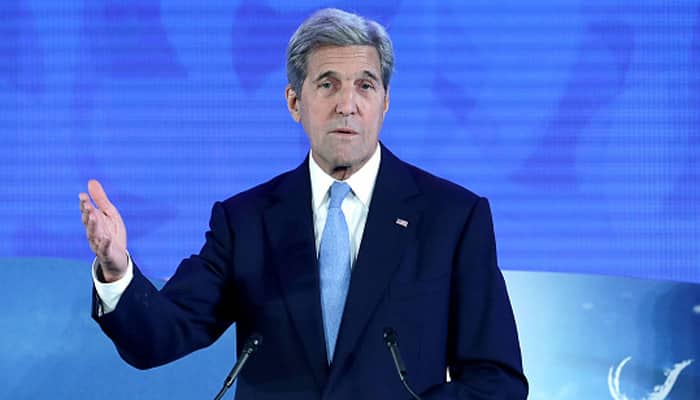 United Nations/Beirut: U.S. Secretary of State John Kerry demanded on Wednesday that Russia and the Syrian government immediately halt flights over Syrian battle zones, in what he called a last chance to salvage a collapsing ceasefire and find a way "out of the carnage".

An impassioned Kerry faced off with Russia`s Foreign Minister Sergei Lavrov at the U.N. Security Council in New York, in an unusually heated televised showdown, saying the bombing of an aid convoy in Syria raised "profound doubt whether Russia and the Assad regime can or will live up to" ceasefire obligations.

Listening to Lavrov made him feel like he was living in a "parallel universe", Kerry said.

On the ground, rebels battled the forces of the government of President Bashar al-Assad on major frontlines near Aleppo and Hama, and air strikes reportedly killed a dozen people including four medical workers.

"I emphasise this to Russia. The United States continues to believe there is a way forward that, although rocky and difficult and uncertain, can provide the most viable path out of the carnage," Kerry said.

"If we allow spoilers to choose the path for us, the path of escalation ... then make no mistake my friends: the next time we convene here we`re going to be facing a Middle East with even more refugees, with more dead, with more displaced, with more extremists and more suffering on an even greater scale."

He mocked what he described as absurd Russian explanations for an attack on an aid convoy on Monday that Washington says was carried out by Russian warplanes. A Russian statement said the trucks had "caught fire", which Kerry called tantamount to blaming "spontaneous combustion".

"To restore credibility to the process, we must move forward to try to immediately ground all aircraft flying in those key areas in order to de-escalate the situation and give a chance for humanitarian assistance to flow unimpeded,” he said.

Lavrov, for his part, called for an independent investigation into the convoy attack, and said all parties needed to take simultaneous steps to stop the war.

The ceasefire which took effect last week is probably the last hope for a settlement on Syria before the administration of President Barack Obama leaves office, and has been Kerry`s main focus for months. But it has so far followed the path of all previous peace efforts: abandoned by the warring parties even as diplomats far away debate it.

Kerry said it was a moment of truth for the opposition, which he said must do more to distance itself from the Nusra Front, long al Qaeda`s Syrian wing, which changed its name and disavowed al Qaeda two months ago.

Nusra is still characterised by both the West and Moscow as a terrorist group excluded from the ceasefire. Other rebels say Moscow and Damascus use this to justify broader attacks.

Overnight fighting was focused in areas that control access to Aleppo city, where the rebel-held east has been besieged by Russian and Iranian-backed pro-government forces and completely encircled for all but a few weeks since July.

Syrian state media said the army had recaptured a fertiliser factory in the Ramousah area to the southwest of the city. The Syrian Observatory for Human Rights, a monitoring body, confirmed the advance and said government forces had pressed forward near an apartment complex nearby.

A rebel fighter in the Aleppo area said warplanes had been bombing all night in preparation for an attack. But "the regime`s attempts to advance failed," said the rebel, speaking to Reuters from the Aleppo area via the internet.

A Syrian military source said insurgent groups were mobilising to the south and west of Aleppo and in the northern Hama area. "We will certainly target all these gatherings and mobilisations they are conducting."

The army reported carrying out air strikes on seven areas near Aleppo. The Observatory said one air strike killed four medical workers and at least nine rebel fighters in the insurgent-held town of Khan Touman south of Aleppo.

The medical staff killed were working for the Union of Medical Care and Relief Organizations (UOSSM), it said. UOSSM confirmed in a statement that at least four of its staff had been killed.

Syrian government forces also launched a major advance in Hama province in the West of the country.

"It is a very intense attack, for which Russian jets paved the way, but it was repelled by the brothers, praise God," Abu al-Baraa al-Hamawi, a rebel commander fighting as part of the Islamist Jaish al-Fatah alliance, told Reuters.

Rebel sources also reported an attempt by pro-government forces to advance in the Handarat area to the north of Aleppo, saying this too had been repelled. Pro-government media made no mention of that attack.

The Observatory reported that a Syrian jet had crashed near Damascus, saying the cause of the crash and fate of the pilot were unknown. Islamic State said it had been shot down.

The truce brokered by the United States and Russia took effect on Sept. 12 as part of a deal meant to facilitate aid access to besieged areas.

Washington and Moscow, which back opposing sides in the war between Assad`s government and insurgents, agreed to jointly target jihadists that are their common enemy.

But such unprecedented cooperation, at a time when trust between the Cold War-era foes is at its lowest for decades, was always a risky gamble. Kerry hammered out the deal over months of shuttle diplomacy despite scepticism among other senior U.S. administration figures.

Tensions between the United States and Russia escalated over a Sept. 17 attack by the U.S.-led coalition against Islamic State that killed dozens of Syrian soldiers in the eastern Deir al-Zor province. Washington said that strike was carried out by mistake with the intent of hitting Islamic State.

Monday`s attack on the aid convoy, which the Syrian Red Crescent says killed the head of its local office and around 20 other people, brought furious international condemnation.

The United Nations suspended aid shipments. Secretary General Ban Ki-moon used his farewell speech to the General Assembly in New York to denounce the "cowards" behind it.

"Just when you think it cannot get any worse, the bar of depravity sinks lower," Ban said. The United Nations initially described the attack as an air strike but later rowed back, saying it could not be sure what had happened.

But Washington says it is all but certain the trucks were hit by the air, which could only have been carried out by Russian or Syrian planes, and it suspects Moscow.

Two U.S. officials told Reuters on Tuesday that two Russian Sukhoi SU-24 warplanes were in the skies above the aid convoy at the time it was struck.
Moscow says the convoy was not hit from the air and has implied rebels were to blame, saying only rescue workers affiliated to the opposition knew what had happened.

Bombs for brides: IS dowries revealed in Libya