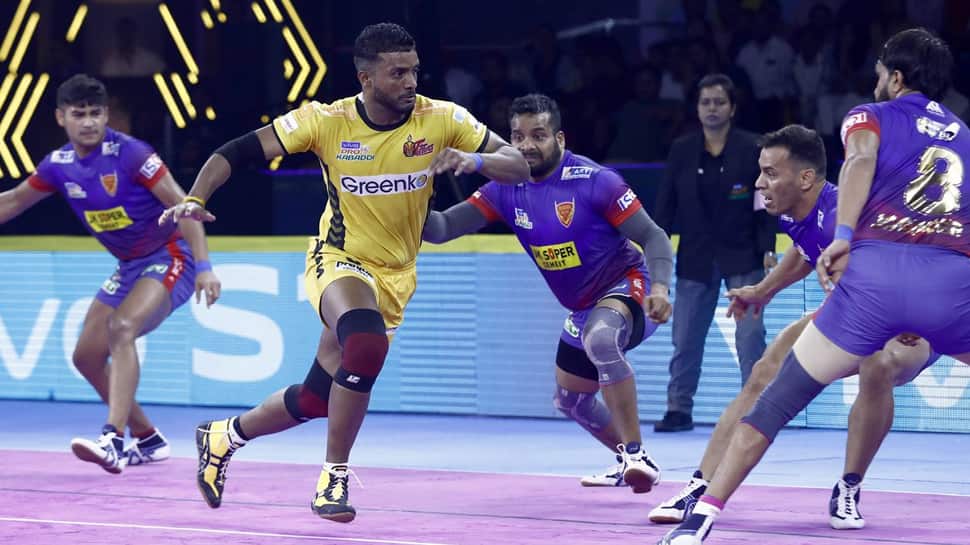 Hyderabad, July 24 (IANS) In an edge of the seat clash, Dabang Delhi pipped Telugu Titans 34-33 in their campaign opener of the Pro Kabaddi League (PKL) here on Wednesday. Raider Naveen Kumar was the chief architect of Delhi`s win as he accumulated 14 raid points. On the other hand, debutant Suraj Desai, the elder brother of Siddharth Desai, scored 18 raid points for Telugu Titans. Siddharth scored eight raid points for the Titans.

Suraj was quick off the blocks for the Titans as he made a two-point raid in the first minute of the match. Meraj Sheykh opened Delhi`s account with a raid in the second minute. It was a closely-fought affair between the two teams as they were level at 4-4 after the first five minutes.

Siddharth was sent to the bench in the sixth minute after a strong tackle by Ravinder. Suraj made another two-point raid in the seventh minute to level the match at 6-6.

Siddharth scored two quick raid points to give Telugu Titans 9-7 lead in the 11th minute. In the 16th minute, Titans forced a super tackle to level the match at 11-11 after their opponents had taken a slender lead. At the end of the first half, Delhi led 13-12.

The hosts began the second half with a bang as they forced a super tackle in the 21st minute. Siddharth made a two-point raid in the 23rd minute as Titans led 17-15. Suraj followed it up a two-point raid of his own in the next minute.

Navin achieved a super 10 in the 25th minute as Delhi trailed 18-20. Delhi inflicted the first all out the match in the 26th minute to level the match at 21-21. Suraj produced a terrific super raid in the 31st minute to give Titans 28-26 lead. Delhi reacted strongly and in the next couple of minutes scored six straight points to lead 32-26.

Titans led by Suraj came back and scored four points to trail 30-32 in the 36th minute. It was anyone`s match in the last three minutes but Delhi kept their nerve to emerge victorious.