The clash between these two sides will be the second match of the double-header on the day and will start at 8:30 PM IST. 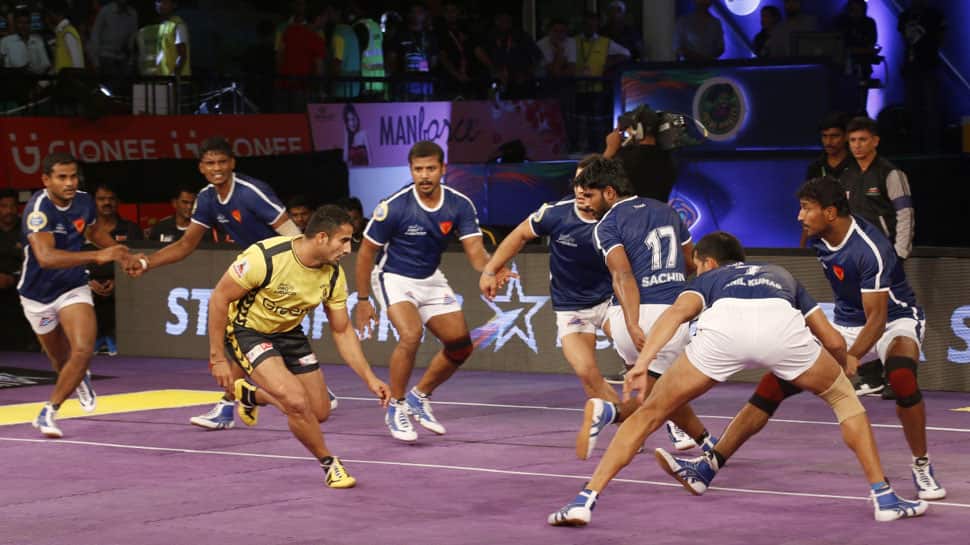 Telugu Titans who are winless after two games take on Dabang Delhi KC who are set to play their first match of the Pro Kabaddi League 2019 at the Gachibowli Indoor Stadium, Hyderabad on Wednesday.

The clash between these two sides will be the second match of the double-header on the day and will start at 8:30 PM IST.

The Telugu Titans lost their opening clash of the tournament against the U Mumba which was followed by a loss to Tamil Thalaivas, spearheaded by former player Rahul Chaudhari. Chaudhari who had spent his last six seasons with the Titans made his presence felt with an excellent performance scoring his maiden Super 10 of this edition.

The fortunes of the outfit have further been hurt by an underwhelming performance so far from Siddharth Desai who was signed for a large sum in the auction. Desai will need to step up for the Titans and deliver a quality performance if they are to snap their losing streak on Wednesday.

Raider Kamal Singh has also struggled to score points on a regular basis which has put a lot of pressure on the defenders. Rajnish is currently the leading raider for the Telugu Titans' with 11 raid points. An error-free performance from defenders Vishal Bharadwaj who has been in good form, Abozar Mohajermighani and C Arun will certainly hand the Titans a strong advantage.

The Dabang Delhi KC, on the other hand, are led by defender Joginder Narwal. Narwal will be optimistic of a quality show from all-rounder Meraj Sheykh, promising raiders Naveen Kumar and Chandran Ranjit, setting the stage for a win in their opening clash.

Naveen was the revelation of the last edition of the tournament for the Dabang Delhi KC and will be looking to assume the role of one of the lead raiders for the side.

The defence also bears a strong look with the likes of Vishal Mane, Ravinder Pahal and Narwal in the squad ensuring a mix of physical and strategic gameplay. The Dabang Delhi qualified for the playoffs of the Pro Kabaddi League for the first time last season. They will be eager to push on and improve even further in this edition.

Pro Kabaddi League 2019: Exciting contest on the cards as UP Yoddha take on Bengal Warriors