U Mumba produced an all-round performance to beat Gujarat Fortunegiants 31-25 in a Pro Kabaddi League Season 7 contest at the Sawai Mansingh Stadium here on Sunday. 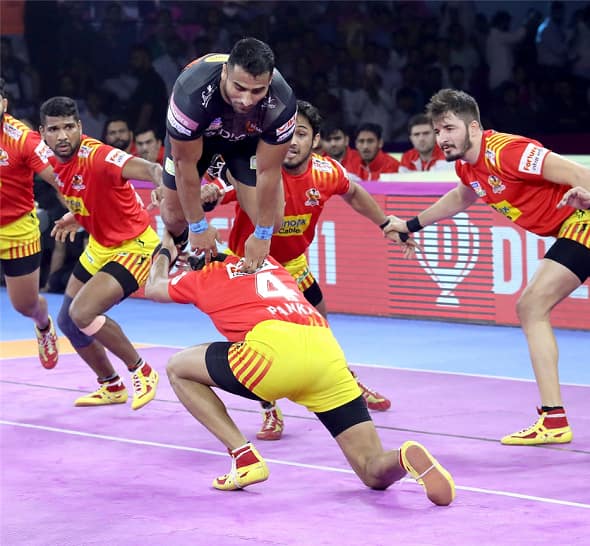 Jaipur: U Mumba produced an all-round performance to beat Gujarat Fortunegiants 31-25 in a Pro Kabaddi League Season 7 contest at the Sawai Mansingh Stadium here on Sunday.

Abhishek Singh secured a Super 10 (11 raid points) for Season 2 champions U Mumba, who were also miserly in their defence with Surinder Singh and Harendra Kumar picking up vital points. The victory meant the Mumbai side jumped to the fourth place in the points table to consolidate their chances of making to the play-offs.

The match, as predicted by many, was a closely fought affair with two of the best defences in the league going head to head. What made it even more interesting was the lack of quality raiders in both the teams and this showed as both defences kept dominating the early exchanges.

But Abhishek Singh's raiding backed by some incredible work in the defence by Sandeep Narwal and Surinder Singh opened up a lead for U Mumba as they inflicted an All-Out on Fortunegiants to move to a five-point lead with 8 minutes still left on the clock for half time.

The problem with defence-heavy teams is how they are just one multi-point raid away from capitulating. And Rohit Gulia soon found chinks in the U Mumba armour and his raids helped Fortunegiants claw their way back into the match with an All-Out with under two minutes left in the first half, which ended with the scores tied at 16-16.

The second half continued to be the same with both defences trading blows. Unfortunately for Fortunegiants, Sunil Kumar picked up an injury which disrupted the team's structure.

With Arjun Deshwal out injured for U Mumba, the raiding responsibilities were solely with Abhishek Singh. The raider produced a 2-point raid in the 13th minute after which the U Mumba defence successfully tackled Sachin to give the Mumbai side a 3-point lead after a long time.

Abhishek Singh then helped U Mumba secure an All-Out with less than three minutes left on the clock to move to a 6-point lead. The defence then held firm in the final minutes to clinch an important victory for the Mumbai side.