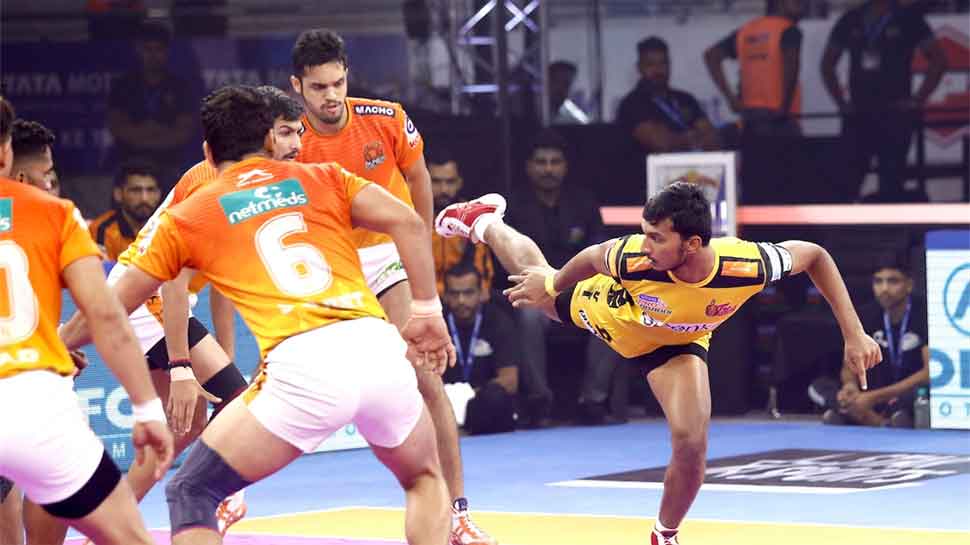 Manjeet (12 points), Sushant Sail (11 points) and Sureejet Singh (7 tackle points) were the stars for the Pune side. The defeat meant Telugu Titans' chances of making it to the playoffs fizzled out with UP Yoddha securing the final spot in the top six.

Telugu Titans were the only team playing for a playoff berth but it was Pune who showed more grit in a dominant first-half performance. Titans' star raider Siddharth Desai was successfully tackled by Manjeet in the very first minute and that set the tempo for Paltan as they picked raid points with ease.

Both Vishal Bhardwaj and Abozar Mighani -- left and right corners respectively -- were absent in the starting seven for a much-changed Titans side and the Pune raiders, particularly Sushant Sail, exploited the lack of experience in the defence and picked up points with ease.

The Pune side inflicted the first All-Out in the 6th minute of the match to move to a 7-point lead and continued their good work to secure another All-Out in the 14th minute to open a 14-point gap.

The Titans did manage their way back through some strong raids by Siddharth Desai but two Super Tackles (by Sushant Sail and Surjeet Singh) ensured they prevented an All-Out. Surjeet clinched his High 5 as the first half ended with the scores 31-16 with Pune well on top.

Pune continued to approach ‘all guns blazing' instead of seeing out the remainder of the time which allowed the Titans to clinch another All-Out with 6 minutes remaining to make it a 9-point game.

The match became a tense affair in the closing minutes but a three-point Super Raid by Iranian Emad Sedaghatnia helped Pune open up a sizeable lead which their defenders could hold on to till the final whistle.

Formula One plays down talk of new teams from 2021