In this piece we compile a few incidents from the ongoing Olympics in Japan, which have gone viral on social media. 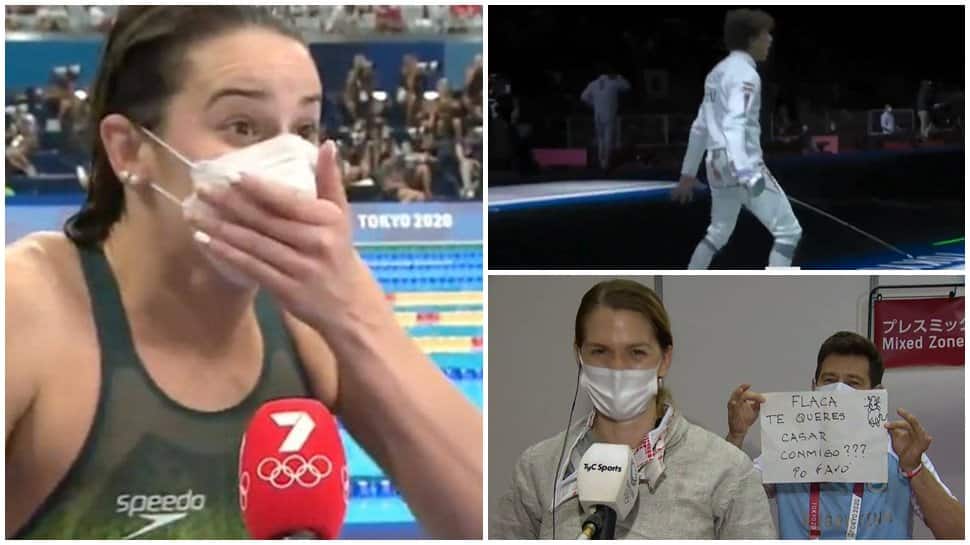 The Tokyo Olympics are underway in one of the most difficult circumstances but sports enthusiats are surely witnessing some great competition in multiple sports discipline. Apart from the stiff competition, there have been moments involving the athletes and coaches, which have sent social media in a tizzy.

In this piece we compile a few incidents from the ongoing Olympics in Japan, which have gone viral on social media.

Egyptian fencer Mohamed Elsayed, who bagged a gold in the previous Olympics held in Rio, was part of a social buzz post his win against three-time world champion Yannick Borel. The Egyptian who lost his first-round match at the Tokyo 2020 epee event failed to control his emotions post his triumph against Borel and went on to replicate Cristiano Ronaldo's iconic 'Siuuu' celebration.

It didn't take much time and Elsayed's celebration video went viral on social media. Here is the video:

The influence is just unreal. #OlympicGamespic.twitter.com/7El4gyrgR6

The pain of a defeat must have subsided for Argentine fencer Maria Belen Perez Maurice, who was surprised by her long-term partner and coach with a marriage proposal in front of television cameras on Monday.

The incident took place while Maurice was addressing the reporters after her contest against Hungary's Anna Marton, which she lost 15-12. Her coach and partner Lucas Saucedo stood behind the fencer with a paper, which read: “Do you want to marry me?” Check the video:

Earlier on Sunday, German football forward Max Kruse also proposed his girlfriend to marry him on live TV after his team secured a 3-2 win over Saudi Arabia.

Australian swimmer Kaylee McKeown failed to control her emotions and soon after clinching the yellow metal at the Tokyo 2020 showdown, the 20-year-old was heard using the 'F' word live on TV. During her post-win interview, which soon went viral, the swimmer was asked to convey her thoughts to her mother. But an excited McKeown replied, "F*** yeah" and subsequenlty covered her mouth after realising what she said.

My favorite moment of @Tokyo2020 has been Kaylee McKeown throwing out a “FUCK YEAH!” during her interview with 7 Sport after winning the gold in the 100m backstroke. pic.twitter.com/pHfGBDF9tg

Australia’s Ariarne Titmus stunned five-time champion Katie Ledecky of the United States in the 400m freestyle event but it was her coach’s sensational reaction after the victory which has garnered massive attention on social media. Watching from the stands at the Tokyo Aquatics Centre, Dean Boxall was seen throwing off his mask, letting out a scream that echoed through the largely empty arena, pumping his fists and thrusting his hips while grabbing the glass railing.

The reaction even stunned the volunteer watching on at the at the aquatics venue, who unsuccessfully tried to stop the Aussie coach.

Boxall’s emotional display became an instant hit on social media. The Australian Olympic team tweeted a GIF that said the coach’s reaction ‘sums it up perfectly’.