The match was stopped in the fourth quarter due to heavy rains with around eight minutes left in the match. 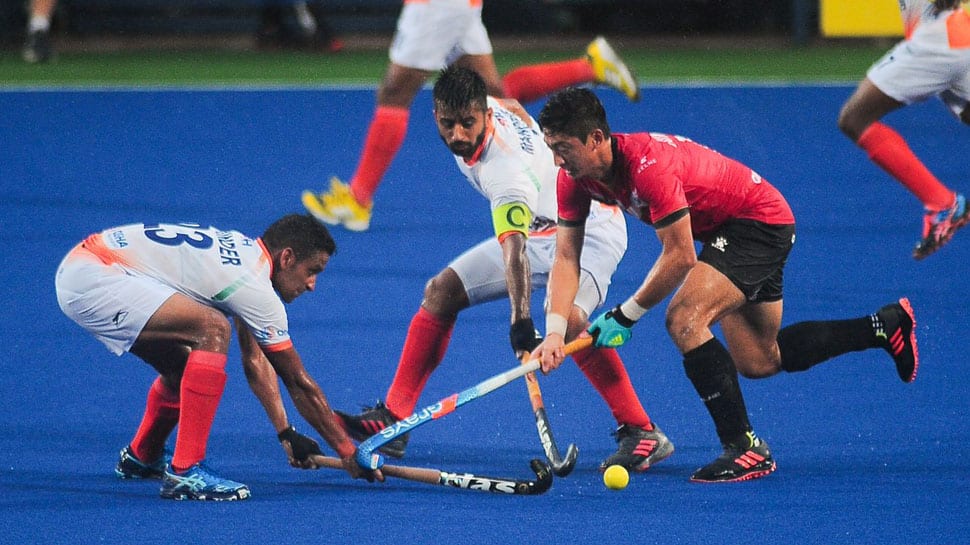 India's perennial problem of conceding goals in the last few minutes of a match hurt them again as Korea equalised in the final minute for a 1-1 draw in the Sultan Azlan Shah Cup hockey tournament on Sunday.

India took the lead in the 28th minute through Mandeep Singh and looked set to earn their second consecutive win of the six-team tournament, but a defensive error led to Jonghyun Jang scoring from a penalty corner just 22 seconds from the final whistle.

The match was stopped in the fourth quarter due to heavy rains with around eight minutes left in the match.

India had defeated Japan 2-0 in their opening match on Saturday.

India made an attacking start with midfielder Vivek Sagar Prasad creating space inside the striking circle within the first minute but the Korean defenders held strong to avert an early goal.

India got two more scoring opportunities but failed to convert them. A quick-thinking Mandeep Singh gave India their first penalty corner in the 10th minute with a good tackle in the baseline.

The opportunity was, however, wasted due to poor execution as both sides could not score in the first quarter.India won their second penalty corner in the initial minutes of the second quarter but the drag-flick was saved by the Korean goalkeeper. The following minutes saw Korea execute the full-press to limit India's circle entries.

Though the tactic was good, they lost three players (Kim Hyeongjin, Jihun Yang and Lee Namyong) to green cards that reduced their strength to eight players. The situation was capitalised upon by India as experienced player Mandeep Singh struck the first goal in the 28th minute.

India kept a good structure, relied on strong defence with precise marking and constantly pushed the Korean defence to make forays into the striking circle.

Playing in the rain after the third quarter began, a defensive error on India's part saw Korea being awarded their first penalty corner of the match. But India's rusher Amit Rohidas did well to ward off the danger and keep India's lead intact.

With a little over eight minutes remaining for the final hooter, the game was stopped due to rain. When play resumed, Korea put up an attacking front to win back-to-back penalty corners but did not get any success.

With 53 seconds remaining, Korea won another penalty corner, but Jonghyun Jang's powerful drag-flick was brilliantly saved by India goalkeeper P R Sreejesh. A referral by Korea saw them being awarded another penalty corner and this time, Jang was on target to level the scores and snatch a draw for his side.

India will next take on Malaysia on March 26.