Mirabai Chanu had opened India's medals tally at the Tokyo Olympics on Saturday as she bagged a silver in the Women's 49kg category. 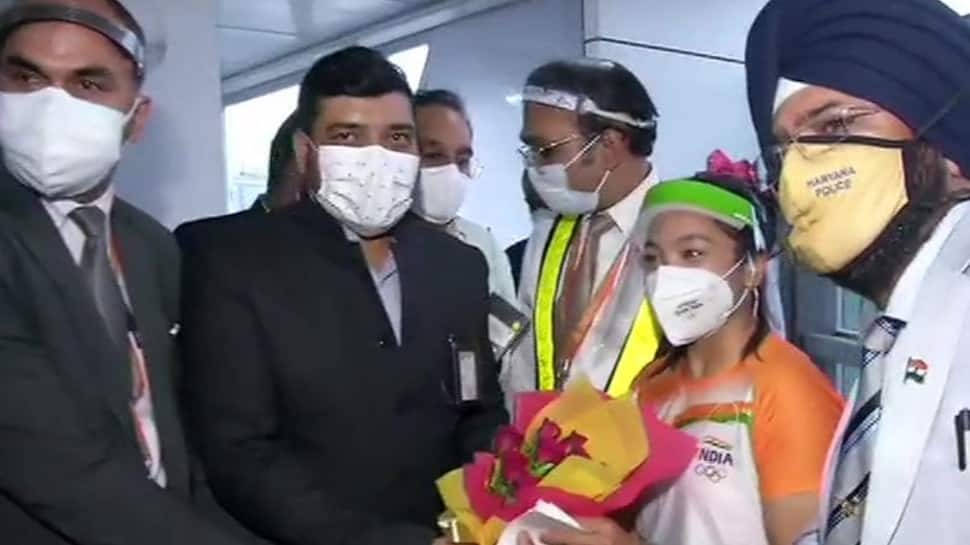 Weightlifter Mirabai Chanu received a thunderous welcome when returned to India on Monday (July 26) after a sensational show in the ongoing Tokyo Olympics. The silver medallist underwent a mandatory RT-PCR test at the Delhi airport. Chanu had opened India's medals tally on Saturday as she bagged a silver in the Women's 49kg category at Tokyo International Forum.

She lifted a total of 202 kg (87kg in snatch and 115kg in clean and jerk) during her four successful attempts across the competition.

Here's how Mirabai Chanu was welcomed in India:

#WATCH | Olympic silver medallist Mirabai Chanu receives a warm welcome as the staff at the Delhi airport cheered for her upon her arrival from #TokyoOlympics pic.twitter.com/VonxVMHmeo

Notably, China's Zhihui Hou bagged gold with a total of 210kg and created a new Olympic Record while Indonesia's Windy Cantika Aisah grabbed bronze with a total of 194 kg.

Boxer Mary Kom on Sunday had congratulated Chanu for winning a silver medal at the ongoing Tokyo Olympics. "Congratulations @mirabai_chanu. Emotional and happy to embrace each other. A proud Manipuri and a fighter for India in one frame," tweeted Mary Kom.

Congratulations @mirabai_chanu . Emotional and happy to embrace each other. A proud Manipuri and a fighter for India in one frame. @NBirenSingh pic.twitter.com/5qrfbDervF

Meanwhile, it has been reported that Mirabai Chanu stands a chance to win the Gold medal if China’s Zhihui Hou fails the test by Anti-Doping Authorities.

“She (Zhihui Hou) has been asked to stay in Tokyo and the doping test will be done. The test is definitely happening,” a source in the know of developments told news agency ANI.

Zhihui Hou had bagged gold on Saturday with a total of 210kg and created a new Olympic Record. The rules clearly state, if an athlete fails the doping test, then the athlete who has won silver, will be awarded the gold.